Today it is my pleasure to Welcome author Roxanne St. Claire to HJ!

Hi Rocki  and welcome to HJ! We’re so excited to chat with you about your new release, Brock – 7 Brides for 7 Blackthornes Book 5!

Hi Junkies!! Love to visit here when I have a new release! Thanks for always being so welcoming! 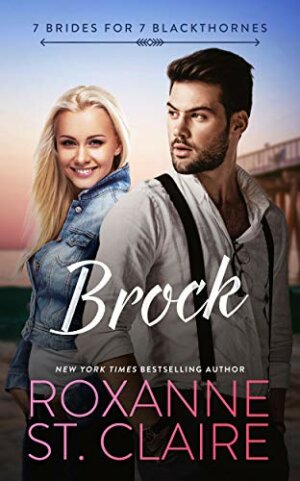 BROCK is book 5 in a multi-author series featuring the 7 Blackthorne men (a mix of siblings and cousins all raised together). The Blackthornes are a wealthy, well-known family that made money in whisky (they’re from Scotland, so no e!), boatbuilding, and car racing. Each book in the series stands completely alone and has been written by a different well-known author. Characters cross over, there’s a very simple subplot that connects the books, but we’ve worked hard to make sure each book is a story that will make you sigh and swoon and fall in love with a Blackthorne. Brock Blackthorne’s job is to make sure the company name is polished to a shine – he’s the keeper of the “brand.” So when a young woman shows up with the intention of writing a “tell all biography” about the family, Brock must keep a close eye on her. Jenna’s determined to uncover the family secrets and save her career. But to find out the truth, they have to work closely together…and that gets complicated, hot, and forces them to face their fears before they can risk their hearts!

The transition from King Harbor to Boston was never nice and easy for Brock Blackthorne, but tonight it felt particularly wrenching. Leaving the family estate on the peaceful, picturesque coast of Maine and making the two-hour drive to the pressure cooker of Blackthorne Enterprises in the heart of the city always felt a little like crashing through a plate-glass window very much like the one behind him. Although, as always, the shades that covered the commanding view of Boston were closed tight, making sure Brock didn’t catch even a glimpse of the skyline or harbor, a nausea-inducing fifty-three stories below.

They both have quirky irrational fears. The hero has a fear of heights and the heroine has a fear of storms. Of course, they both had to face those fears to prove their love. That was fun to write! Oh, and this story kicks off with something I rarely write — a one night stand between strangers. But it was so *right* for the conflict in the book and I think it really worked!

Definitely the first meet – it’s cute and fun and would make a great opening scene to a movie!

Same as always! Fall in love, have fun, laugh, sigh, wipe a tear, and go looking for more!

I’m back at work on the Dogmothers series, the spinoff series from my populare Dogfather series. Look for the next book, THREE DOG NIGHT, in October!

Giveaway: A $10 Gift Card to the online book retailer of your choice!!

Here’s the rest of the scene from above:

Meet the Blackthorne men, who are as hot, fast, and smooth as the whisky that built the family fortune, and the yachts and race cars that bear their name. From proud Scottish stock, Blackthornes never lose. But, one by one, the seven sexy men in this family are about to risk everything when they fall for strong and beautiful women who test their mettle in life…and love.

Brock – Book Five
With proud Blackthorne blood in his veins, Brock Blackthorne loves his job as the keeper of the “brand.” His job is to protect the family name, to keep the company’s reputation as clean as possible, and ensure that skeletons stay well-hidden at the family compound in King Harbor, Maine. So when an ambitious and inquisitive biographer is tasked to pen a revealing “tell all” book about the Blackthornes, Brock decides to personally guide the beautiful writer far away from any family landmines. But the more time he spends sharing the history and heart of his unusual clan, the more he wants this captivating woman in his arms…and in his life.

The daughter of renowned investigative journalists, Jenna Gillespie’s job, reputation, and advance money is on the line if she doesn’t unearth something scintillating and surprising about this dynasty built on whisky. Unfortunately, the maddeningly sexy Brock Blackthorne is doing everything he can to make sure that doesn’t happen. But when she uncovers a lead about the family’s multi-million dollar whisky recipe having been stolen, Brock decides to help her, certain they will finally remove a cloud that hangs over the family name.

As Jenna and Brock get closer to the truth, they also get closer to each other. And when the real story is finally revealed, one of them will have to sacrifice all they think they hold dear if they have any chance for a lifetime of love.

Published since 2003, Roxanne St. Claire is a New York Times and USA Today bestselling author of more than fifty romance and suspense novels. She has written several popular series, including The Dogfather, The Dogmothers, Barefoot Bay, the Guardian Angelinos, and the Bullet Catchers.

In addition to being an ten-time nominee and one-time winner of the prestigious RITA™ Award for the best in romance writing, Roxanne has won the National Reader’s Choice Award for best romantic suspense four times, as well as the Maggie, the Daphne du Maurier Award, the HOLT Medallion, Booksellers Best, Book Buyers Best, the Award of Excellence, and many others.