Today it is my pleasure to Welcome author Sean D. Young to HJ!

Hi Sean and welcome to HJ! We’re so excited to chat with you about your new release, Claiming The Doctor’s Heart!

Thanks so much for have me on the blog today! 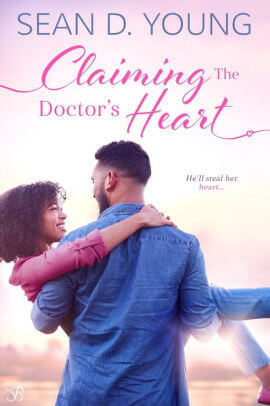 Big city doctor is thrown into the role of in his small hometown. He only has thirty days before he has to return to Atlanta or he’ll loose the opportunity of a lifetime. How can he leave the woman he’s falling in love with and his family legacy behind?

Holly Ransom’s heart jerked as her perfectly good cream
puff pastries tumbled to the floor. “No!” She reached out to
try to stop them, but it was too late. Her pretty presentation
she’d worked so hard on was ruined. “Surely, this isn’t
happening.”

Holly had a crush on Eric when they were in high school. So when the book opens and he shows up, it brings back memories for her.
Eric slowly sees Holly is a special woman when she starts to help him get his footing at the clinic.

Holly actually kissed him on the cheek in front of half the town.
He kissed her during the thunderstorm.

For a few seconds, they observed the guests on the dance
floor, but when the music changed, Eric reached for her
hand. “Let’s dance,” he said, squeezing it for reassurance.
Holly hesitated. She couldn’t remember the last time
she’d danced with a man. “I don’t know, Eric.” She didn’t
want to give folks even more to gossip about.
“It’s harmless,” he said, giving her a dimpled smile.
“And you don’t want to miss the chance to be in my arms.”
Holly stifled a laugh. Eric could be so silly sometimes.

“You were the star of the evening. People will be talking
about that wedding cake for months to come,” Eric said as
they continued to sway to the music.
Being complimented by a handsome man wasn’t an
everyday occurrence. Holly was so glad that he couldn’t see
her blushing. The sexy tone of his voice and the words he’d
spoken made her swoon.
“I’m not going to lie, I was teasing you about wanting to
be in my arms,” he whispered. “But the truth is I’ve longed
for this moment since the last time we were together,” he
said softly, holding her against him.
A quiver went through Holly as she allowed his words
to sink in. Her world was changing right in front of her eyes,
and it wasn’t a fairytale. Eric was holding her like she was
the most precious thing in his life.
Holly looked up, her eyes meeting his. “I can’t think of a
better place than this moment. “It just feels so right.”
His eyes darkened with desire, and his hands remained
around her waist. Now she knew how Whitney Houston felt
when she danced with that guy in Waiting to Exhale. She’d
gotten so lost in being in Eric’s arms, she didn’t realize the
song had ended. The other guests were clapping—some
even whistled at them. Eric stopped, and she finally opened
her eyes, looking around to find that they were the only two
people on the dance floor.
Holly threw her hand up to her face and turned her
back. She was mortified. Eric laughed, catching her hand.
He playfully took a bow and prompted her to do the same.
He twirled her around one last time. “I really enjoyed that,
didn’t you?” he asked her. “Just me and you.”

They dynamics of two people who grew up in the same small town; one left and the other one stayed. I think the contrast of their lives and the way they see the world will be related. The book also speaks to what many of us can relate to having to take care of our parents. Falling in love unexpectedly can be both fascinating and scary. I believe the tenderness that Eric and Holly feel for each other is relatable. It’s a nice heartwarming story that I think readers will enjoy.

I’m currently working on Secrets From The Heart which is book #2 of the Welcome to Clover Creek Series. It should be released some time in 2021.

To enter Giveaway: Please complete the Rafflecopter form and Post a comment to this Q: Do you have something that was passed down from your grandmother?

Excerpt from Claiming The Doctor’s Heart:

Holly watched as all of Clover’s so-called high society
entered the ballroom to help Monica Hamilton and Billy
Kendrick celebrate their nuptials. Arm in arm, couple after
couple entered the room, dressed up like Hollywood royalty
as they were escorted to their tables. Holly found herself
smiling when she saw Eric and his mother at the door.
Like most of the men at the reception, he wore a black
tuxedo, fitting his broad shoulders to a T. Even with a room
filled with people, the only person she concentrated on was
him. He looks good in whatever he wears, she thought as she
watched him greet the other guests. He soon spotted her
and walked in her direction.
He completely stole her breath. He stood so close she
felt her eyes flutter. “You look beautiful,” he said, capturing
her hand in his.
His nearness, the smell of his cologne was so tempting,
she moved even closer to him. “And this cake,” he said,
pointing to it. “I don’t think I’ve ever seen anything like it.
I’m so proud of you,” he said, gently pulling her to his side.
Holly shifted her posture, standing even taller than her
already five foot eleven inch height. She’d always wanted to
create something of this magnitude, and her heart swelled
with pride. Eric noticing was like the icing on the cake, so to
speak. “I’m so exhausted.” Holly smiled.
Carolyn Bradley reached over and touched her arm.
“He couldn’t wait to come over. We didn’t get in the door
good.” She giggled.
“You look really nice, Mrs. Bradley,” Holly said, hoping
that her voice wasn’t trembling and her slight embarrassment
from Eric’s show of affection wasn’t obvious. She reached
out to shake his mother’s hand, needing to put a bit more
space between herself and Eric.
Carolyn Bradley wore a pastel pink chiffon gown with
rhinestone cuffs and collar. The simple yet elegant dress
showed off her slender figure.
“Thank you, my dear. It’s good to see you,” Carolyn
said before giving her a hug. “Eric told me that you made
the cake.”
Holly smiled proudly. “Yes, I did.”
“We’ll have to keep you in mind for the big galas,”
Carolyn said, squeezing Holly’s hand. “I used to love those
tea cakes your grandmother used to make.” She smiled.
“I didn’t know that. I’ll have to send you some soon.”
“Well, from the looks of this cake, all your hard work
is going to pay off once Mom starts bragging about how
talented you are to her friends. This is a thing of beauty,”
Eric said, pulling her close once again.
She could feel his breath on her neck and a tingle down
her spine. Caught off guard by his continued show of public
affection, Holly gave him a nervous smile. Hearing his words
and feeling the tenderness in his touch in front of his mother
startled Holly, but in a good way. She gathered herself and
relaxed, since everything felt natural.
She noticed his dark hair had been freshly cut, but what
stood out most to her at that moment were his sensual lips.
Holly drew in a sharp breath. He was standing so close
to her, placing his arm around her waist. He was doing it
again—touching her—and she loved it. She reminded herself
to relax, because she needed to concentrate. But right now,
her thoughts were about the sensual way her body felt when
he touched her.
She turned toward him. “Thank you, Eric,” she said,
glancing over at the cake. “You’re looking handsome,” she
managed to say, straightening his bow tie.
The music stopped, and everyone stood, awaiting the
entrance of the couple.
Eric leaned close. “We’re going to take our seats. I’ll be
back later.”

Dr. Eric Bradley left small-town Clover Creek, Tennessee to follow his dreams. But when his father is hospitalized after a stroke, Eric must fill in as the town doctor. He’s used to working in a medical research lab, not listening to patients go on about their grandkids and dodging questions about where he’s been for the last ten years. Small-town life has never been his style.

Without Holly Ransom, the receptionist, to keep things running smoothly, he wouldn’t survive. And seeing her every day is an unexpected upside. If only her sweet n’ sassy charm were enough to solve all his problems.

Eric has only thirty days to return to Atlanta or he’ll lose the opportunity of a lifetime. But how can he leave the woman he’s falling in love with and his family legacy behind?
Book Links: Amazon |  Goodreads |

Her debut novel TOTAL BLISS was published in 2005. At an early age, Sean found that she loved words and tried to read everything she could get her hands on. She joined her first book club “Sweet Pickles” at the age of 7. Writing would come later, when she wrote short stories for her own enjoyment, then she wrote the Easter play for the youth at her church at the age of 12.

Sean, a graphic/web designer loves building websites and graphics almost as much as she loves writing her stories. She loves working in her church and lives in Northwest Indiana with her family.
Website | Facebook | Twitter | | Instagram |