Today it is my pleasure to Welcome author Geri Krotow to HJ!

Hi Geri and welcome to HJ! We’re so excited to chat with you about your new release, Colton’s Mistaken Identity!

Hi Sara and Everyone! 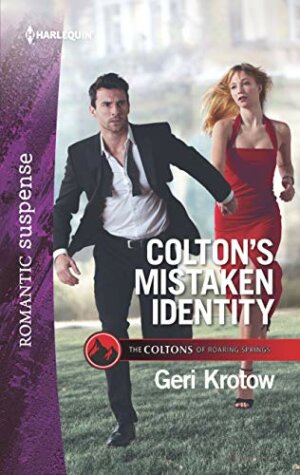 C is for Colorado, where the Coltons are at it again, O is for OMG this couple has some heat! L is for Love, which Phoebe and Prescott will find if they make it out alive, T is for the race against Time they’re in to evade a killer, O is for the truth that Phoebe is the Only woman for Prescott and N is for Never doubting that love will find a way for this glamorous couple!

The mountains began to glow with the sunrise, and the sky’s violet streaks yielded to a deeper summer blue as Phoebe Colton ran along the resort’s jogging path. The Chateau stood two miles behind her, on the other side of the copse of aspen birch trees ubiquitous to Colorado.

It’s the first time I’ve written a famous movie star, and Prescott Reynolds was so much fun to pair with Phoebe, a very successful Colton who isn’t afraid to go after what she wants, or to protect the people she loves like her twin sister Skye and now, it seems, Prescott.

Phoebe can’t help noticing how attractive Prescott is, but what really pulls her in is his sense of self–he knows he’s not the big star everyone sees, he’s more in that he has a life and there are more important things to him than celebrity status, like his family.
Prescott is drawn to Phoebe by her calm certainty amidst the chaos of the film festival. She’s

At the opening gala for the film festival, Phoebe and Prescott take a walk out on the huge veranda, and then step down into the English-style garden. It’s the perfect place for a first kiss–under the Colorado stars.

I love the following scene because Prescott is so clearly in tune with Phoebe (posing as Skye) and wants to protect her. And Phoebe is willing to let him!

You would have never caught his attention as yourself.
Phoebe knew it was true but didn’t want to accept it. What was happening between the two of them was organic and had nothing to with Skye. Except she couldn’t get past the fact that she was lying to him each time she let him call her Skye.
The traffic showed no sign of letting up, so she turned to walk the block to the main pedestrian crosswalk. She stepped back onto the curb, but she found herself blindsided as a rush of warm, stinky liquid assaulted her. She tried to get out from under the stream and inadvertently stepped off the curb. Phoebe heard the oncoming traffic and felt paralyzed on the spot.
“Look out!”
“Skye!”
Several witnesses cried out over the sounds of squealing breaks and car horns. Phoebe’s voice joined them as her ankle cruelly twisted in the high heels, forcing her first to her knees and then hands as she landed on the asphalt. Directly perpendicular to the traffic, she didn’t see but felt a car bumper hit her shoulder. Knocked on her side, she curled into a fetal position to save herself from the inevitable.
She was about to be run over.
But instead of the hot scrape of metal against her bare skin or the weight of a car smashing her onto the pavement, she heard the voice of life.
“Skye!” Strong hands were on her, removing her hands from her face. She opened her eyes and looked into Prescott’s concerned face. “Can you hear me?”
She nodded, unable to speak.
You’re in shock.
“Does anything hurt? Can you move your legs?” Warm hands were on her body, feeling for breaks.
“I—I-I’m good.” She pushed herself into a sitting position, leaning on her hip. Prescott’s arms were around her, holding her. “I think I might have messed up my ankle. And my dress, my hair…” Goodness, her makeup was probably ruined, too. If anyone local who knew both her and Skye saw her, her cover might be blown.
The sound of sirens reached them, and she tensed. “Oh no. I don’t want any extra attention.” She’d already noticed that traffic was stopped and a crowd had gathered.
“You’re going to have to be checked out. I’ll go with you to the hospital.”
“Is that our only way out of this?” She motioned with her hand to the scads of people surrounding them. Suddenly there wasn’t enough air, and she had a strong urge to run, anywhere, away from this scene.
“They’re almost here, hang on. I’ve got you.” He half held, half cradled her in the middle of the street, and she kept her face buried in his chest. He’d probably ruined his tuxedo helping her, but she’d get the resort dry cleaning to fix it.
Phoebe pulled her head back and looked up at Prescott, who was staring at her. The concern on his gaze made her forget about her twisted ankle and the fact she’d almost become roadkill. He should know who she was before this went any further.
“Prescott—”
“Nothing to see here, folks, we’re good.” The loud announcement by the arriving EMTs stopped her from breaking her role as Skye.

I would have told Phoebe to be herself with Prescott no matter what, and to not fear telling him who she really is. I’d have told Prescott to stop worrying that the next woman in his life would be as destructive as his ex.

I’m hard at work on another Colton’s book, for release summer 2020. There will be a new Silver Valley PD book in 2020, as well. I also have another bigger, “secret” project that’s taking a lot of my time. I never have a shortage of story ideas!

To enter Giveaway: Please complete the Rafflecopter form and Post a comment to this Q: Would you be able to date/fall in love with a celebrity? Why or why not? And, for fun, which celebrity do you have in mind? 🙂

The wrong twin…or the right one?
A Coltons of Roaring Springs romance
Marketing exec Skye Colton suddenly disappears, putting the Roaring Springs Film Festival in jeopardy. Enter Skye’s identical twin, Phoebe, who poses as her sister. In her starring role, Phoebe catches the eye of A-list actor Prescott Reynolds, and she can’t deny the electricity that erupts between them. With Skye still missing and a stalker at large, this is the worst time to fall in love, especially with danger racing toward them…
Book Links: Amazon | B&N | GoodReads

A U.S. Naval Academy graduate and former Naval Intelligence Officer, Geri left her Naval career to pursue a writing career. She has travelled the world, living in such far-flung places as Whidbey Island, Washington State and Moscow, Russia. Geri enjoys creating love stories that stand the test of time, and with settings that she has personally experienced. She’s lived it, now she writes it!