Today it is my pleasure to Welcome author Michelle Beattie to HJ!

Hi Michelle and welcome to HJ! We’re so excited to chat with you about your new release, Cowboy True! 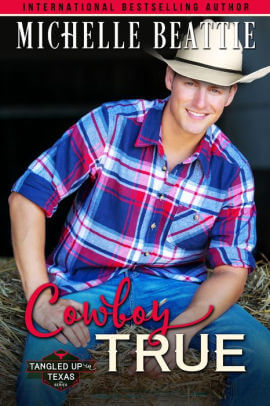 Cowboy True is the story of high school friends who bump into each other six years after graduation and finally give in to the attraction they had as teenagers. Unfortunately for my heroine, Faith, she still feels unworthy of a man like Gage and though the sex was even better than she’d ever fantasized about, she still can’t see a future with him.

Gage, on the other hand, has regretted letting her go since high school. He saw their hookup in a bar as a chance to finally be with the woman he hasn’t stopped loving in six years.

But when their one-night together leads to a pregnancy, it only further complicates things. By the time Faith comes to town to tell Gage, she’s made some hard decisions. Decisions that’ll rock Gage’s world and drive him to prove she is the one for him and that together they can have everything she’s ever really wanted.

When Faith Stone made up her mind, she stuck with it. So, despite her galloping heartbeat and sweaty palms, she kept her foot on the gas pedal. Well, she did slow down when her car crested the hill, but who could blame her?

Faith grew up feeling abandoned and unworthy. While she was strong enough to walk away as soon as she able, the scars linger. She’s strong enough to make her own life and stand on her own, but her determination to prove she doesn’t need anyone is a major hang-up between her and Gage.

Gage is the pleaser, the mediator. The glue. Even though he’s the baby of the family he’s the one everyone counts on. I had a powerful line in the book that I eventually took out but it still resonates with me. That his brothers were so busy looking ahead that they never turned around to see who was left behind. That feeling molded Gage into the man he is.

I like the scene at the beginning when they see each other for the first time since their hook-up three months ago. She’s hit the ditch with her car, is slightly hurt and Gage, on his way back from medically transporting a patient, sees the car and pulls the ambulance over. Faith can’t see him the way her car is positioned but the minute he gets closer she recognizes that cologne. It brings her back to a hotel room and a night she can’t forget. She has her eyes closed and is thinking, “please don’t be him” and then he says her name. With Gage’s partner there they can’t discuss that night but there’s so much sexual tension and awareness and I think that would play so well on the screen.

She wasn’t sure how long she sat there, her head leaning against the driver’s window. But when she finally dared open her eyes, her breathing sounded as though she were hyperventilating. Aware the engine was still running, Faith pried her stiff fingers off the steering wheel and turned the key.
The good news was the car hadn’t rolled. And the air bags hadn’t deployed. So the front end, at least, was fine. And, she realized with a shuddering breath, so was she.
Faith released the seat belt and pushed open the door. She took it as another good sign that it opened without protest.
Unfortunately, when she stepped out of the car and put her weight on her left leg, her knee wasn’t as agreeable. A hot stab of pain had her gasping and clasping the top of the door to keep upright.
Balancing on one leg, Faith glanced down at the other. Since she’d dressed in shorts, her knee was easy enough to examine. There wasn’t any blood. No bones sticking out where there shouldn’t be. It must have just gotten a good banging. Kinda like her head. It was throbbing, too.
She had acetaminophen in her purse and a half-full bottle of water in her cup holder. But it suddenly felt like too much effort to reach onto the floor—her handbag had gotten knocked off the seat—and grasp it. Of course, the fact that she suddenly felt light-headed didn’t help any.
“I’ll just sit a minute.”
Instead of inside the car, Faith dropped to the grass. Sitting between her vehicle and the open door, she bent her right leg and pressed her forehead to her thigh. She smelled the vanilla bean body butter she’d rubbed on after her shower that morning. She concentrated on that to keep her stomach from pitching out the candy bar she’d eaten after she’d stopped for gas.
The odds of keeping it down were swinging in her favor when she heard the sound of an approaching vehicle.
“Please keep going,” she muttered. While she was starting to feel better, she was still shaky and she’d prefer not to deal with anyone, even a well-meaning Good Samaritan, until she felt stronger.
But as luck would have it, the vehicle slowed then stopped. Two doors closed. She heard hurried footsteps rush through the long grass. Realizing they couldn’t see her since the car had ended up parallel to the road with the passenger side facing the highway, Faith lifted her head and called out, “I’m okay.”
She was bracing herself to stand when someone knelt at her side.
Her insides clutched. She knew that cologne. Oh, man, did she know it. Twelve weeks ago, she’d rolled around a bed with a man wearing nothing but that cologne.
Ever since, she’d had vivid dreams—awake and asleep—of how that scent had wrapped around her. How he’d wrapped around her. Faith clutched fistfuls of grass. It couldn’t be him. It was a popular brand. Loads of men wore it.
Please don’t be him.
Besides, he’d have no reason to be there. It wasn’t as though she’d called 911—or anyone else had since theirs was the first vehicle she’d heard. So, good. Whew. She still had some time before she faced him.
A warm hand settled lightly on her shoulder. “Faith?”
There’d been many times in her life when Faith had wished she could disappear. Just close her eyes and reappear somewhere else, anywhere else. As anyone else.
She’d never wished for it more than she did right then. Dammit. What was he even doing there?

That we are our own worst critics. So often, I think, we see ourselves harsher than others do. I’d like people to realize that and not be so hard on themselves. Also, that the past doesn’t dictate your future. You write your own story and you’re worthy of everything you ever dreamed of. You just have to have the courage to reach for it and believe you deserve it.

Giveaway: Ebook of Cowboy True as well as swag from Tule Publishing

To enter Giveaway: Please complete the Rafflecopter form and Post a comment to this Q: At first, Faith is devastated by news of her pregnancy. In the end, it becomes the best thing that ever happened to her. Has there been occasion in your life when something at first might seem like the worst thing ever but ended up being exactly the right thing?

She’s back in his life… and this time he’s not letting go.

Gage Granger knew back in high school that his friend and secret crush was desperate to get out of Last Stand, Texas. But with his roots running deep into the Hill Country soil of his family’s ranch, he couldn’t leave and so made the tough decision to let her go.

When Faith Stone runs into Gage in a San Antonio bar, she’s had just enough to drink to act on feelings that haven’t cooled in six years. And enough sense to flee the morning after. Yet almost twelve weeks later she’s back in her hometown and despite her life-altering news, her plan’s the same—leave Last Stand and its painful memories behind. Faith will never be anyone’s burden or responsibility again.

For Gage, Faith has always been the one. But he’ll have an uphill battle to convince her his heart is true.

Award-winning author Michelle Beattie began writing in 1995, almost immediately after returning from her honeymoon. It took 12 long years but she achieved her dream of seeing her name on the cover of a book when she sold her novel, What A Pirate Desires, in 2007. Since then she’s written and published several more historical novels as well a contemporary. Her pirate books have sold in several languages, been reviewed in Publisher’s Weekly and Romantic Times. Two of her independent self-published works went on to win the Reader’s Choice Silken Sands Self-Published Star Contest.

When Michelle isn’t writing she enjoys playing golf, reading, walking her dog, travelling and sitting outside enjoying the peace of country life. Michelle comes from a large family and treasures her brothers and sister as well as the dozens of aunts, uncles and cousins she’s proud to call family. She lives outside a tiny town in east-central Alberta, Canada with her husband, two teenage daughters and their dog, Ty.
Website | Facebook | Twitter | Instagram | GoodReads |