Hi Julie and welcome to HJ! We’re so excited to chat with you about your new release, Destroyed With You!

I’m so happy to be here! 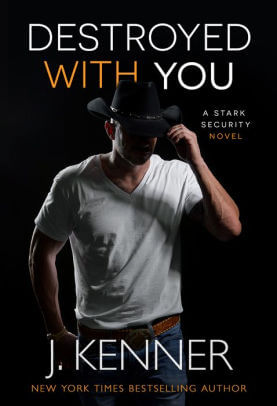 Sexy Stark Security agent Winston Starr is a broken man. Years ago, his wife was killed by a car bomb because of him–a punishment from the bad guys on whom he was closing in. He’s carried the guilt and loss all that time.

But now Linda is back. Alive and well, and the only thing stronger than Winston’s rage, is the intensity of the attraction he still feels for the woman who betrayed him.

“And he really didn’t tell you anything?” Emma leaned against Old Blue, Winston Starr’s ancient Ford pickup.
He was Colonel Anderson Seagrave of the Special Operations Command, an elite intelligence branch of the National Security Council known colloquially as the SOC. Seagrave’s call had interrupted Winston while he was celebrating with his friends at Emma’s sister’s engagement party.
“All he said was that we needed to meet,” Winston told her.

Winston is a former intelligence agent now working for Stark Security — he’s sexy, controlling former West Texas sheriff who was destroyed when his wife was killed. Linda has secrets of her own, not the least of which is that she’s not really dead…

My characters always surprise me when I write! That’s part of the fun!

Probably a scene soon after Winston discovers (at least part of) the truth:

“Goddammit, Winston, let me up.”
“Sure thing. I’ll get right on that.”
There’s sarcasm in his voice, but when he comes and stands right by me and starts to fiddle with the belt, I think maybe he really is going to free me. Then I hear the distinctive zzzzzp and realize that, no. All he’s done is tie me down even tighter with cable ties.
He steps back, the belt now in his hand. “There you go.”
“You son of a bitch.”
He grins. “Pretty much.”
I make a frustrated growling noise as I tug against the headboard, but to no effect. All I manage to do is make my wrists sore. But what the hell, right? I deserve the pain. I completely misjudged the situation, and all because being around this man has thrown me completely off my game.
I yank at the bonds again. “Let me go, damn you. What do you think you’re doing?”
“You should have done your homework better, sugar. You should have been more interested in what became of the man who was your husband.”
“Is my husband,” I say. “I’m alive, aren’t I?”
I see the comprehension on his face as he realizes the impact of my still walking this earth. But he doesn’t smile. There’s absolutely no hint on his gorgeous, rugged face, that still being tied to me could possibly be a good thing.
Fuck.
“I’m not too sure about that,” he says. “I don’t think you are my Linda anymore. After all, Linda Starr is legally dead. I know, because I’m the one they handed the death certificate to.”
My heart twists painfully in my chest. “Winston, I—”
“Doesn’t much matter, though, does it.” His eyes narrow from where he stands above me beside the bed. ”After all, you’re not my Linda. You’re Michelle Moon, and God knows, I’ve never met her.”

With all my books, I want to give readers a chance to escape to someplace where there is a guaranteed HEA. Destroyed is no exception, but I also want readers to experience that thrill of not only a second chance romance, but the certainty that love can survive even when it seems like there is no way through the forest.

Next up after Destroyed With You is My Beautiful Sin, the second book in my Fallen Saint series! I can’t wait! And I’m also working on the next two Stark Security stories — Memories of You (a 1001 Dark Nights novella) and Ravaged With You!

Giveaway: A digitally signed print copy of Destroyed With You by J. Kenner! US only, please.

Excerpt from Destroyed With You:

I love this flashback scene!

Former sheriff Winston Starr doesn’t think about the past. That dark day when he lost the sweet, innocent woman he’d loved, dead because of his mistake in a mission that had gone horribly wrong.

Now an operative with Stark Security, he’s left Texas behind, focusing only on his work and closing his heart to love even as his soul screams for revenge against the scum that killed his Linda. When old friends reveal new evidence, Winston learns that not only is Linda alive, she faked her death in the ultimate betrayal.

But things are not as Winston believes, and he soon finds himself on the run with the woman who ripped his heart out. Now, the only thing stronger than his rage is his desire for the woman who destroyed him.

J. Kenner (aka Julie Kenner) is the New York Times, USA Today, Publishers Weekly, Wall Street Journal and #1 International bestselling author of over one hundred novels, novellas and short stories in a variety of genres. She lives in Central Texas with her husband, kids, and two demanding cats.
Website | Facebook | Twitter | Instagram | GoodReads |

30 Responses to “Spotlight & Giveaway: Destroyed With You by J. Kenner”