Today it is my pleasure to Welcome author Kimberley Ash to HJ!

Hi Kimberley and welcome to HJ! We’re so excited to chat with you about your new release, Forgive Me! 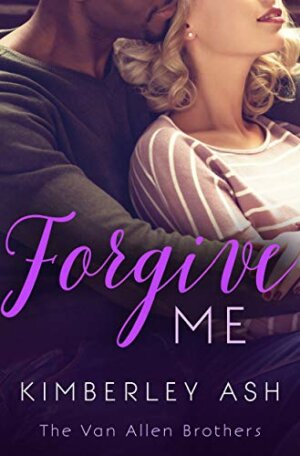 First, I should issue a trigger warning for losing a baby in childbirth. The book also deals with past incidents of rape.

Forgive Me is about two people who have been broken by traumas in their past. Lucas, an attorney in the sex crimes unit of the Manhattan DA’s office, feels responsible for his best friend’s death when they were kids. Piper, the front-desk manager at a boutique hotel, has fled to New York after losing a baby and her engagement. They have one hot New York summer to come together and learn that they both deserve joy and a happily-ever-after.

Justin slammed a hand onto the desk. “You can’t do this!”
“Three cars, Justin,” Piper Mahoney said, looking up at him, her heart thumping. Three months into her new job and she already had to fire someone. Someone she’d hired.
[if you want more than three lines…]
“Accidents!” he shouted. His pale skin had turned bright red in his fury.
“You’ve cost the hotel twenty thousand dollars in damages,” she said in her calmest voice, while she pressed her shaking hands onto her thighs under the desk. “You inconvenienced the guests while their cars were fixed. That pillar you nicked with the Mercedes cost twelve thousand dollars to repair. My predecessor would have fired you after that one, you know.”
“Take it out of my wages!” he yelped.
Piper sighed. He’d be paying it back until she became a Yankees fan.

Lucas has convinced himself he doesn’t deserve happiness, because of what happened with his best friend when he was 15. He also considers himself a product of his father, who was a violent alcoholic the last time Lucas saw him years ago. In penance for what he believes is the angry part of him inherited from his father, he does everything for everyone else, like taking the hardest job he could think of in the DA’s office. What I wasn’t expecting was that his ideal future includes a career as a college professor, but it kind of snuck up on me when he was sitting gloomily in his office one day.

Piper used to be the life of the party, but ever since she lost the baby and her engagement ended, she’s changed her whole personality, even dying her platinum blonde hair brown. She can’t see a way out when she meets Lucas again after a very brief fling they had three years ago. Thanks to Lucas, she slowly comes back to her real self. Through him, she volunteers at an animal shelter and I hadn’t foreseen how important that would be in her life. In the end, both of them find satisfaction not only in each other, but in completely different career paths than they’d expected.

Probably the first time they have dinner together, because the sexual compatibility needs to be there.

“Happy to help,” he said, his voice somehow lower, his hand turning up to cradle hers again. Her fingers curved into his palm, stroking his skin.
The buzz of energy in her ignited to desire in a heartbeat. In the low light of the restaurant, the planes of Lucas’s face were shadowed, his eyes looking hot and dark. Piper remembered their first meeting, the spark that had passed between them, and heat raced from her hand to her belly and throbbed there. Wake up, Piper.
First, she should clear up something. “Lucas, are you with anyone?”
He looked surprised. “No, of course not.”
“Okay, good,” Piper said. “Then I can do this.” And she leaned over the table and kissed him.
Given that it was their first kiss in three years, she should have known better. Planned it better. She should have known the first touch of his lips to hers would make her knees weak and force her to hold herself up with one hand.
His mouth was just as she’d remembered, soft and warm, with a bonus hint of wine. Lucas reached up his other hand and touched the back of her neck, holding her to him, seeming not to care that they were in a small room with patrons five feet away. He moved his lips over hers as if they had all the privacy in the world, slowly and with a light pressure that made her want to open her mouth. The small part of her that knew they were in a restaurant stopped her, but the fire he set burning in her was reflected in his eyes when he released her.
“Check, please.” He smiled.

Apart from a deep sense of satisfaction at the end? (That’s my favourite part of romances!) That self-love is the most important thing! Piper and Lucas have other people to learn to forgive, but they beat themselves up more, and so the title of the book is really about them learning to forgive themselves.

Well, not to spoil the big surprise (which you just might guess by the title of the series!), but Lucas eventually learns that his father had two more sons after him, and they are the subject of the next two Van Allen Brothers books coming from Tule this summer! Physically, they are completely different from Lucas, but they share many common traits by having the same father. They also have the same dimples when they smile, and who can resist that?!

To enter Giveaway: Please complete the Rafflecopter form and Post a comment to this Q: What’s your favorite place or activity in New York City? If you’ve never been there, what would your dream trip to the city be?

Excerpt from Forgive Me:

When past and present collide….

When Piper Mahoney and Lucas Richardson randomly run into each other in the lobby of a NYC hotel that Piper manages three years after they shared one steamy, impossible-to-forget afternoon together, the attraction is tangible. Neither feels ready to act though. Piper has left friends and family in Boston to reboot her life after a difficult loss while Lucas is vying for a promotion at the DA’s office and handling his own personal problems with his ailing mother. Impulsively Piper reaches out. Lucas can show her his favorite haunts in the city this summer while they enjoy a friends with benefits fling.

Lucas is tempted. He hasn’t relaxed or had fun in forever and Piper was always the one woman who got under his guard.

Can he keep Piper’s no-strings bargain even as he falls in love or will their pasts strangle any hope for a future?

Kimberley Ash is a British expat who has lived in and loved New Jersey for twenty years. When not writing romance or romantic women’s fiction, she can usually be found cleaning up after her two big white furry dogs and slightly less furry children. You can reach her at www.kimberleyash.com, and on Facebook, Twitter, Instagram and Goodreads.
Website | Facebook | Twitter | Instagram | GoodReads |

25 Responses to “Spotlight & Giveaway: Forgive Me by Kimberley Ash”