Today it is my pleasure to Welcome author Shelli Stevens to HJ!

Hi Shelli and welcome to HJ! We’re so excited to chat with you about your new release, Her Fake Boyfriend! 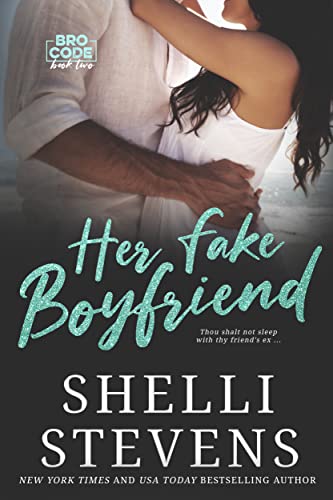 This story has the taboo romance of dating your friend’s ex. You’re just really not supposed to do it! But my hero, Eric, has been in love with the heroine, Hannah, for just about as long as he’s known her. And when someone starts stalking her, pretending to be in a fake relationship to protect her seems like the right thing to do. Also, it gives him the opportunity to get to know her better.

Where my heroine shows her cluelessness at some modern euphemisms.

She sighed. “I have to admit I’ve missed getting to see the usual group since James and I broke up. Anyway, it’ll be fun to hang out with you again. Netflix and chill, right?”
He shot her a quick look, not sure if she’d realized what she just said or not. His dick had heard the suggestion and twitched under his jeans.
But Hannah’s expression was pure innocence as she smiled at him.
“What?”
“Nothing.” He jerked his attention back to the road.
“It’s not nothing, you just gave me a weird look.”
He tightened his grip on the steering wheel. “It’s just . . . Not sure if you’re aware, but uh, ‘Netflix and chill’ can have a dirty meaning.”
“Dirty? What?” She shook her head, her brows drawing together. “It just means chilling out and watching some TV. People say it all the time.”
He cleared his throat. “Yeah, they do say it. And I guess if you take the words literally, it can mean that. But it’s also slang for, um, having sex.”
Her eyes widened and her lips parted. “No.”
“Yeah.”
Her cheeks held a bit of pink now. “Yeah, um, I didn’t mean it like that.”
“It’s cool. I knew you meant just watch shows or something.”
“Of course.” She clenched her hands in her lap. “Oh, how embarrassing. You must’ve thought I was hitting on you.”
“Nah.” Even if it was a fantasy of his. Forbidden as fuck, but still it was there.
“I would never do that.”
“I know.”
“Like ever.”
“Yup, I got it.” He gripped the steering wheel until his knuckles turned white.
Good lord, his self-esteem was really taking a number tonight.
She couldn’t make it any clearer that she held zero interest in him as anything other than a friend.

I love the forbidden tropes. So falling for your friend’s ex is a fun and tricky one to dive into. I also have the characters involved in Taekwondo, which I did for many years (I had a second-degree purple belt). And I love writing interracial romances, because that’s a reality in the world. My friend Rachel, who is Korean, inspired me with her interracial relationship and gave me lots of advice on this book and was my sensitivity reader. And I usually love to throw a bit of suspense at least in one book in a series I write, which is where the stalker came from.

I think as I wrote, I discovered my heroine was over her long-term relationship that ended in the last book. And that she likely had been for a while. She was ready to have fun and experience seeing other men. My characters always reveal themselves to me as I write. I’m a pantser.

I really enjoyed writing this sparring scene in Taekwondo, where she’s re-learning the martial art. The hero and heroine really start to realize the chemistry between them.

“You want to block my attack.” Eric did a lightning-fast front kick that grazed her uniform.
Her eyes rounded. “I thought this was no contact!”
“To the body. Contact with the uniform is a point.” He lifted his hands into a protective blocking position. “Block me. Like this.”
This time when he came at her with a front kick, it was slow, giving her enough time to understand the way to block him.
“Yes, good job. Try and get a point on me.”
Yeah, like that was even remotely possible. She hid a snort and glanced around at what others were doing. Seeing something that looked within her ability, she aimed a punch at his chest.
He deflected with his wrist, sending her arm careening harmlessly to the side. Which kind of just pissed her off.
With a growl, she attempted to land one of those front kicks near his stomach, like he’d done to her.
But—of course—he stopped it. Not just deflecting it, but catching her ankle in a strong grasp.
Hot and cold washed through her at the touch of his calloused fingers on her skin. The air rushed from her head, and she told herself it was simply because she was trying to maintain her balance.
She hopped on her one foot, trying to pull her other foot free from his strong fingers.
Oh, please tell me I shaved my legs this morning.
While she was distracted by the internal debate of how hairy her legs may or may not be, he scored a point with a kick to her side.
“Ooh,” she gasped and finally pulled her foot free. Then immediately fell. The hard studio floor rushed up to meet her back and she braced for it.
Before she could hit, his arm swung out to catch her, snapping her upright with enough force that she fell into his arms.
It felt like minutes that they were locked together, uniform to uniform, staring into each other’s eyes. But in reality, it was only seconds before he released her, steady on her feet again.
But that one interaction had rocked her to the core.
The way Eric watched her, with a mouth in a grim slash and a serious gaze, made her think she wasn’t alone in feeling that electricity between them.

Pushing the hero and heroine apart when they’re starting to connect is always a bit hard. Here’s the scene where that happens.

“And if I’m honest, I’m not surprised by any of this.” Blake took a bite of his burger and gave him a considering look. “I could tell there was something brewing between you two for the last year or so.”
Eric jerked his gaze up, his blood quickening. “What do you mean?”
“You guys were always hanging out at the barbecues. You made her laugh in a way I never saw James make her laugh. She spent more time with you than she did with James.”
“James was always busy doing other shit,” he argued defensively. “I didn’t want her to feel abandoned when she was over.”
“Look, I’m not defending him on that part. He definitely dropped the ball on his relationship with Hannah while going through law school. I’m just saying, I noticed there was some chemistry between you guys.” Blake lifted a shoulder and laughed. “I just didn’t think you’d be stupid enough to act on it.”
“I kind of want to punch that cocky smile off your face.”
“Yeah, I don’t blame you.” Blake’s grin widened. “Truth’s a bitch, ain’t it?”
It sure as hell was.
“Look, you haven’t slept with her yet. Not much damage done. Just keep it in your pants.”
“She only has one bedroom.”
“So, crash on her couch. It’s a no-brainer.”
He thought back to that moment when she’d made it clear what she wanted from him. Somewhat shy, but wonderfully confident, as she’d stared at him from beneath her lashes.
Let’s not even pretend you’re going to sleep on the couch. You’re going to sleep with me. In my bed.
God, could he even roll this all back? Sleep on the couch and keep his hands off her? Would she hate him for it?
“Anyway, that’s my advice. Keep her safe, but keep your hands off.” Blake sighed.

This very much showcases my writing style. The steamy contemporary romances, sometimes with a hint of suspense.

I hope they have fun and enjoy it, fall in love with love. And maybe learn some things about other cultures, that I wasn’t totally aware of either until talking to my Korean friend. It’s a diverse world and I like to bring that into my books.

I’m working on book 4 of the Bro Code series, one I decided to add on that won’t be out until next spring. I introduced a firefighter in book 1 and he really just needed his own story.

Giveaway: $5 Amazon gift card + an e-copy of Her Fake Boyfriend

To enter Giveaway: Please complete the Rafflecopter form and Post a comment to this Q: If you leave reviews, where do you tend to leave them?

Excerpt from Her Fake Boyfriend:

Thou shalt not sleep with thy friend’s ex…

Eric Nordland has been in love with his best friend’s girl since he met her. And now that she’s single, the temptation to make a move is killing him. Especially since their paths keep crossing. Dating your friend’s ex is a big bro code violation, but when Hannah comes to him in trouble, there’s no way he’ll leave her to fend for herself.

Coming out of the only romantic relationship she’s ever known, Hannah Jeong isn’t really looking for a rebound. But when the creepy parent of one of her students starts to stalk her, she jumps at Eric’s offer to pose as her fake boyfriend. What she didn’t expect was to start having feelings for a man she’d always seen as just a friend.

The line between right and wrong becomes fuzzier by the day as the attraction between them grows. Keeping Hannah safe from an obsessive man is just as much Eric’s mission as not giving his heart to a woman he can never have.

Shelli is a New York Times and USA Today Bestselling Author who read her first romance novel when she snatched it off her mother’s bookshelf at the age of eleven. One taste and she was forever hooked. It wasn’t until many years later that she decided to pursue writing stories of her own. By then she acknowledged the voices in her head didn’t make her crazy, they made her a writer.

Shelli is a true pluviophile (lover of rain) who currently lives in the Pacific Northwest with her husband and two daughters. She loves Disney, taking sunset pics (follow her on Instagram), baking, nature walking, and spontaneously bursting into song. She’s written various genres of romance, but is most known for her contemporary series such as Marshall Ranch, The McLaughlins, and A is for Alpha.
Website | Facebook | Twitter | Instagram | GoodReads |

« REVIEW: Cinder-Nanny by Sariah Wilson
Spotlight & Giveaway: Lucie Yi Is Not a Romantic by Lauren Ho »

41 Responses to “Spotlight & Giveaway: Her Fake Boyfriend by Shelli Stevens”