Hi Allison and welcome to HJ! We’re so excited to chat with you about your new release, Her Forbidden Highlander Husband! 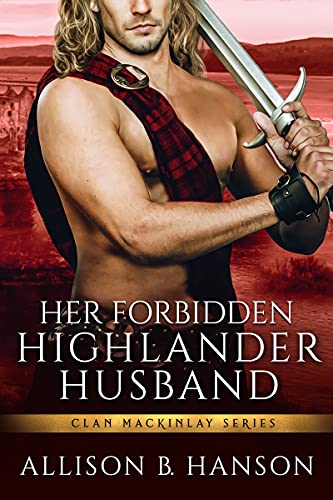 A woman who cannot trust marries a man who will never give up. Could their marriage set their clans to war?

Standing outside the laird’s study, Evelyn Stewart took a
deep, steadying breath before knocking. A summons from
her father could mean anything from a request to have the
maids change his bedding, to a lecture on her shortcomings
for hours on end.

Liam met Evelyn four years ago after she was rescued from some horrible men. He was tasked with escorting her back to her home. Along the way, he decided she was the one for him. In this book, he’s a grown man with a position of power in his clan and he’s going to see her father to ask for her hand.

“Kissing is best when it’s not just about two people
pressing their lips together.”
She tilted her head. “I thought that was exactly what
kissing was.”
“No. Well, yes. But I think more than the actual kiss, it’s
the anticipation that makes a truly great kiss.”
“And have you kissed many women?”
“You have set a fine trap for me, wife, but I’ll do my best
not to fall into it.” He winked at her so she knew he was
jesting. “I’ve kissed women, but whether it was many or just
a few, none of them will compare with you.”
He studied her dark eyes as they warmed over. He stood
and moved around the table. Still holding her hand, he
helped her to her feet and was encouraged when she swayed
toward him.
When he placed his other hand lightly on her cheek, she
closed her eyes. He waited another breath before leaning
down and touching his lips to hers.

“What if my father doesn’t give up? What if he comes
for me again? Because he likely will.”
He sat up and touched her chin. “I’ll take care of you.”
She couldn’t help but smile at his sincerity.
“I’m sure you would, but if he sent an army?”
He shook his head. “I doubt it would come to that. To
me, you’re priceless, but to your bastard of a father, I don’t
think he’ll waste many men to have ye back.”
“What if he’s so lost to his anger, he does the
unexpected?”
He let out a breath and took her hand. “Ev, when we
were in the stable and you were on your knees before me,
begging me to take you— Ow, woman.”
“That tale grows more ridiculous every time you tell it.”
“Aye.” He winced as he rubbed his arm where she’d
smacked him. “That’s how men tell stories. No one wants
to hear the telling the same way over and over, you must…
liven it up a bit each time.”
“Liven it up? I believe you mean exaggerate beyond
recollection.”
“Yes. Just that.” He laughed.
“Why don’t you ever say what really happened?” she
whispered against his lips. “That as soon as I suggested we
marry you grabbed me up and dragged me off to the first
clergyman you could find.”
He laughed and kissed her, a soft lingering kiss that had
her leaning closer so it wouldn’t end. But he pulled away
and looked into her eyes, his earlier joking gone.
“I was not a complete fool when we agreed to marry, Ev.
Yes, my heart was ahead of my mind on the matter, but I did
have time to think as we raced toward the clergyman.” His
lips pulled up a bit, but his face went back to seriousness. “I
knew your father would be displeased that I took ye. And
if he didn’t come after me to tie a rope around my neck,
he’d certainly curse me the rest of his days.” He shook his
head. “But I wanted only you as my wife. I decided I was
willing to endure the curses, and as long as I had you at
my side it didn’t matter much where we live.”

Mari came out and took the children. She glanced at
Liam and turned red again. He felt the flames licking at his
neck.
When she was gone, Cam crossed his arms. “What was
that about?” he asked, his brows creased.
“What was what?” Liam looked away.
“What did you do to my wife?”
“Nothing! I mean, we spoke on some things. Personal
things I came to speak to ye about, but she offered and—
Christ—I don’t think I’ll be able to look her in the eye the
rest of my days.”
Cam still looked angry but relaxed a bit. “What was it
you wanted to know?”
“Mari suggested I let Evelyn control things between us.
In our bed.”
Cam’s eyes went wide in surprise. “You spoke to my
wife of bedding?”
“As I said, I wanted to speak to you of it, but she insisted
she could help. In truth, she did help a great bit. But I wasn’t
able to ask her the most important part, for I was afraid our
embarrassment would be such that the house might burn
down around us.”
“What was the part you still want to know?” Cam’s
shoulders relaxed but his arms were still crossed.
“It’s fine. I’ll figure it out.”
“Liam, you must be desperate if you took to relying on
Mari for answers. Just have out with it.”
“You’ll make light of my situation.”
“Probably. But do you want to know or not?” Cam
grinned at him and smacked his shoulder.
Yes. He did want to know. “It’s just, I may not have
another opportunity with Ev if I don’t do it right the first
time. She’s skittish and even if she’s in control, I’m not sure
she would care do it a second time if I do not give her reason
to enjoy it. Do you ken what I’m saying?”
“Aye. You want to know how to please her.”
“Very much so.”
“I’m sure you have your own…ways of doing things.”
“I do, but I’m certain they’re not good enough. Mari
pointed out how women don’t like it to be over fast, and I
may have been rather hasty in the past.”
“Christ almighty, you spoke to my wife of such things?”
“Nay. She spoke to me of them.”
“Go slow,” Cam barked.
“Aye. I got that part already.” He definitely needed to
apologize to a number of the maids for his error when he
saw them again.
“When you do something, if she makes a good sound
about it, do it again.” Cam scratched his head and looked
away. Were his cheeks turning pink?

…if they love strong women who will do anything to protect those they love; and sweet, sexy heroes whose patience and kindness can help heal the deepest wounds.

I’m working on A New Earl, a Regency historical from my new Widows and Rogues series.

Giveaway: Highlander Gift set! Enjoy your morning beverage with a kilted hero and other fun treats! (For US residents only)

To enter Giveaway: Please complete the Rafflecopter form and Post a comment to this Q: Do you love cinnamon roll heroes? (Tough around the edges, but warm and sweet in the center)

Excerpt from Her Forbidden Highlander Husband:

Liam MacKinlay is certain that when he asks for Evelyn Stewart’s hand in marriage, the third time’s the charm. For hasn’t he risen to war chief of the clan MacKinlay, a seasoned warrior, and an honored member of the clan that took him in as a child? But once again, her father denies Liam the lass he lost his heart to years ago.

Daughter of the Laird of the Stewart clan, Evelyn is expected to perform her daughter’s duty, including marry for the better of the clan…. even if that’s against her will. But upon learning her father plans to trade her to an unknown clan in exchange for cattle, she will do almost anything to escape the future set out before her— including running away and marrying Liam MacKinlay.

Liam’s discovering that beneath Evelyn’s sweet disposition is an iron will to match any warrior. But now their marriage may start a war between the clans and Liam must fight for his new wife and his family. Even if it means raising his sword against those he calls “kin”…
Book Links: Amazon | B&N | iTunes | Goodreads |

One very early morning, Allison B. Hanson woke up with a conversation going on in her head.  It wasn’t so much a dream as being forced awake by her imagination. Unable to go back to sleep, she gave in, went to the computer, and began writing.  Years later it still hasn’t stopped.

36 Responses to “Spotlight & Giveaway: Her Forbidden Highlander Husband by Allison B. Hanson”