Today it is my pleasure to Welcome author Aliyah Burke to HJ!

Hi Aliyah and welcome to HJ! We’re so excited to chat with you about your new release, Her Marine Next Door!

Hi! Thank you so much for having me here today. It’s an honor and Happy Holidays! 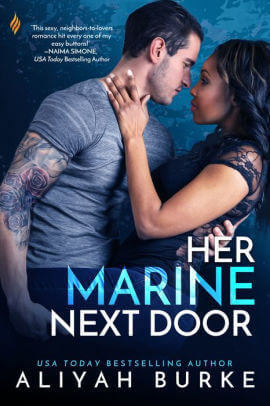 1 pain in the ass neighbor who she can’t stop fantasizing about + 1 unexpected development = him and her together in her house. What better time to act out those fantasies. Past pain, baby momma drama, meddling parents. It won’t be smooth sailing but he’s not giving up on them, he’s had her and he won’t let her go.

Skylar Radford jumped as she emitted a squeak at the unwanted, deep, and unmistakable rumble of the Harley roaring down the cul-de-sac. That obnoxious, earsplitting sound could only mean one thing. He had returned.
Parker Jax.
With a frustrated sigh—a mixture of sexual want and irritation—she climbed off the stool at her workstation and went to the window to steal a hungry look.

Looks were the first thing, as they are neighbors, but they each have their own reasons for staying on their side of the fence.

She turned to the man whose arm continued to feel so good against her and found him staring down at her. “Why would you pretend we’re together? You know that woman is a notorious gossip. Sweet as pie, but can’t keep her mouth shut to save her life.”
“Who said I was pretending?” He winked then kissed her.
Skylar’s entire world shifted on its axis. Knees trembling, she leaned into him with a whimper. This was no tender kiss. No. He possessed every inch of her with it, tongue surging through her mouth. He slid his around hers.
Christ. She’d forgotten what a kiss was like.
The man ended the kiss, tugging on her lower lip in a playful tease. “See you later, baby.” Parker smacked her on the ass, then he strode out the door without a look back.
Chest heaving, she closed the door and rested against it with a groan.

Ohh, unfair. Okay, so I have two but I will go with this one.

Skylar withdrew two bottles of Schnapps and placed them on the countertop. After grabbing a glass, she turned to carry all three items to the couch where she had every intention of indulging and not remembering a damn thing come morning and froze.
Standing in the open doorway leading to her backyard, dripping water on her light gray flooring, teddy bear in one small hand, was Cullen. His eyes were wide and even with the distance between them, the fear emanating from him was palpable. His tiny body shook.
“Bud, what happened? What are you doing over here?” She damn near sprinted over to him and ignored the sting of pain as her knees hit the floor; one of the bottles toppled over behind her but she didn’t care.
“Mama,” he sobbed, wrapping his thin arms around her as he buried his face into her neck. The bear dripped cold water down her back. Each clap of thunder had him shaking harder. Even his teeth chattered.
Her heart broke and she rose, keeping him in her arms. She headed straight for the bathroom and got him stripped and wrapped in a dry, thick towel. His blue gaze latched onto her, and he wasn’t releasing her.
“We have to leave Murray here for a bit with your wet clothes.”
Tears still fell from his eyes and he shivered. “Stay with Mama.”
“Yes, you’re here with me tonight.”

I would hope this one.

She appeared before him, on her knees. Skylar settled her hands on the outsides of his thighs, close to but not touching the envelope he held. In his periphery he noticed the drink beside him on the end table. “Parker.”
He lifted his gaze to hers and fell a bit further in love with this incredible woman, if that were possible.
“You don’t have to do anything you don’t want to.”
“This could change everything. It will. Either way.”
A muscle flexed in her jaw. “Do you really think that?”
“You don’t?”
A sad smile flashed across her features. She pinched her lips tight then moved her hands, reaching for the envelope, only to pause.
He waited.
“May I?” She gestured to the paper, head cocked to the side.
Parker handed it over. He stared at her fingers as they curved around the edges. Her pale, unpainted nails had some chips in them from work. There was a half-moon bruise on her thumbnail.
Sexy. He knew what she did and how she got those marks.
Once she held the results in her hand, she shuffled closer on her knees, pushing her way between his legs until she couldn’t get any closer. He closed his arms around her and rested his face against the side of her neck.
She smelled like home to him. Her scent, heat, and comforting feel of her made it all right.
I can take whatever the results are. So long as she’s here with me.

I hope to help them escape from everyday reality for a while, and just enjoy the ride that, while there will be ups and downs in the story, I always write one with a happily ever after. Our daily lives can be full of so much “other” it’s nice to just be able to dip your toes into a place where you know by the end, everything will be right. Villain loses, hero and heroine win.

I’m actually working on five right now. One being a story that links to this one with one of Parker’s friends. I’m rereleasing some books over this next year again that I’ve gotten back from publishers and finishing up some series. Right now, working on my third cozy, the one that follows Her Marine Next Door, some paranormals and a historical.
2021 is going to be a busy year, but I wouldn’t have it any other way!

Giveaway: Any ebook from my backlist. Thank you to everyone who stopped by! It was such a pleasure to be here..

To enter Giveaway: Please complete the Rafflecopter form and Post a comment to this Q: What is it that draws you to a book when you are looking? Cover? Blurb? And does it vary by genre?

Excerpt from Her Marine Next Door:

My next door neighbor Parker Jax is not my type. He’s covered in tats, rides a motorcycle, and his parties keep me up all night. The fact he’s sexy as sin doesn’t change the fact we are oil and water.
I’m a quiet artist. He’s a rowdy marine. I’ve got a broken heart. I’m convinced he doesn’t have a heart at all.
Thankfully, my bad-boy neighbor is on leave from the Marines for only thirty days. But then the jerk has to go and show me that he has a soft side beneath all those hard muscles. He actually leaves his own party to help me, and he didn’t even have to.
Fantastic. Now I owe him.
I’m not worried, though. What are the chances he’ll need me to do anything before the month is up?
But when a woman shows up with a kid at her side, knocking on Parker’s door, it turns out those chances are pretty good…
Book Links: Amazon | B&N | iTunes | Goodreads |

Aliyah Burke is a USA Today Bestselling Author who’s an avid reader and never far from pen and paper (or the computer). She is happily married to a career military man. They are owned by three Borzoi. She spends her days at the day job, writing, and working with her dogs. She loves to hear from her readers and can be reached here.

« REVIEW: Take Me Away by Kelly Elliott
Spotlight & Giveaway: Walking the Edge by Sue Ward Drake »

17 Responses to “Spotlight & Giveaway: Her Marine Next Door by Aliyah Burke”