Today it is my pleasure to Welcome author Nina Crespo to HJ!

Hi Nina and welcome to HJ! We’re so excited to chat with you about your new release, Her Sweet Temptation!

Hello Everyone! I’m excited to be here to share about Her Sweet Temptation. It’s the second standalone title in The Tillbridge Stables series. 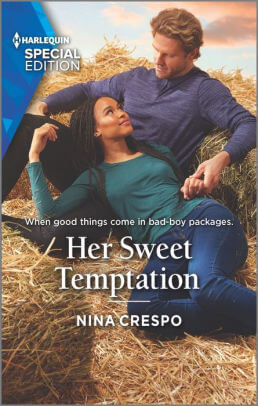 Rina Tillbridge has experienced some tough breaks, especially in her personal life. The “right” guy is someone who doesn’t take risks. But when stuntman Scott Halsey struts onto her property for his latest film, she’s more than just a little tempted. The thrill-seeking stuntman has no designs on commitment. But he meets Rina and all his red flags are igniting white-hot passion. The big question — is a Hollywood ending part of their future?

“She was beautiful…a force in her own right. Sometimes, he got the feeling she didn’t know how truly amazing she was.”

Rina Tillbridge is a secondary character in The Cowboy’s Claim, Tillbridge Stables, Book 1. Her interaction with there family in the first book set the tone for the second. She’s so resilient, independent, and loyal. Watching Scott ignite her passionate side in this book was fun to write.

Scott teaches Rina how to fly like Peter Pan. I’m still envious of her experience.

As Scott pulled down on the rope, the muscles in his arms and legs began to burn from repetition, but he endured it, mesmerized by the expression of bliss on Rina’s face as she flew through the air, her braids flowing behind her.

She laughed and the pure rich sound filled him with happiness…and a bit of sadness that this moment would come to an end. It was beautiful. She was beautiful…a force in her own right. Sometimes, he got the feeling she didn’t know how truly amazing she was.

That’s a hard question. In general, making sure there is a satisfying ending is something that’s important.

I hope Rina and Scott’s story is a great book escape for readers and they close the book with a smile.

I’m currently working on The Cowgirl’s Surprise Match, Tillbridge Stables, Book 3. My next release is on the steamy side of romance, The Last Rule of Makeups, Breakup Bash, Book 3.

Giveaway: Two winners. Two signed print copy of The Cowboy’s Claim up for grabs. U.S. Only

To enter Giveaway: Please complete the Rafflecopter form and Post a comment to this Q: What’s your favorite dessert to have while reading a book?

Excerpt from Her Sweet Temptation:

Nervous jitters intertwined with a healthy dose of excitement. In some ways, it was almost like riding a rollercoaster but not blindfolded. And he and Owen were both professionals. Safety and precautions were part of their job, not taking reckless chances. And this was a chance to fly like the free-spirited Peter Pan? How could she pass that up?

Owen took her keys and phone, and Scott helped her step into the harness that fit around and through her legs, around her back and across her chest. “Now I’m going to tighten this to a point that might feel a bit uncomfortable.”

“Do what you have to do.” He could make the harness more than a bit uncomfortable if it meant she wouldn’t fall out of it.

Scott smoothing his hands over the straps raised tingles. By the time he finished, her knees felt a little weak.

Once she was secure, Scott attached the wire to the back of the harness.

Owen stood near the scaffold, gloves on, holding on to the end of the rope. He pulled and the wire grew taut, tugging her from the back and lifting her slightly before settling her back down.

“Whoa.” She held her hands out to her sides as nerves loosed butterflies in her stomach.

Scott held her by the waist. “Relax. You’re good. I’ve got you.”

“His gentle but firm hold alleviated doubts, but his closeness wreaked havoc on her concentration.

As if sensing her mind wanting to drift, he gave her a slight squeeze before letting go. His expression, more serious than she’d ever seen him, snapped her thinking into place. “Slouching will make the harness really uncomfortable. Pretend you’re a ballet dancer. Head up, stand straight, engage your core.”

Rina thought about her riding days. To stay straight in the saddle, she’d often pretended there was a string pulling her up from the top of her head.

“Good. Just like that. We’re going to try a simple lift first. Owen’s going to pull you straight up then set you down, nice and slow. When you land, don’t lock your knees. Keep them soft.” Scott demonstrated, jumping up from the ground and landing with his knees slightly bent.

Using his body weight, Owen pulled down on the rope hand over hand.

As Rina lifted straight into the air, her breath whooshed out of her with a squeal of shock and delight.

“You alright up there?” Scott asked.

The harness cut into her inner thighs a little, but the wonderful weightless feeling made up for it. “Yes. I’m good.”

“Try some small graceful movements. Lift your hands to your sides. Up above your head. Good. Now pretend like you’re running in slow motion.”

Rina did the latter, moving her arms and bicycling her legs. She couldn’t stop a giggle as she imagined what she must look like running on air.

“Disappointment that she couldn’t stay up there made her slump, but the harness digging in reminded her to straighten up. Rina descended for a soft but wobbly landing. “Oh my gosh. Can we do it again? That was fun.”

Scott laughed. “You think that was fun?” He pointed her to a corner in the barn. “You’re going to start over there. When you’re lifted up, lean your body toward home. That’s the X.”

What was going to happen dawned on her. This was the flying part! Rina went to the corner and faced the X. “I’m ready.”

She was lifted up, and Rina leaned in as she flew back toward center. “Woooo!” She landed and when Owen lifted her back up, she soared back to the corner.

Again and again, she moved to the different starting places Scott indicated and flew through the air.

Owen had to leave and Scott took over.

As she kept flying, all of her cares and worries about the cafe and what was or wasn’t coming in the future magically slipped away.

As Scott pulled down on the rope, the muscles in his arms and legs began to burn from repetition, but he endured it, mesmerized by the expression of bliss on Rina’s face as she flew through the air, her braids flowing behind her.

She laughed and the pure rich sound filled him with happiness…and a bit of sadness that this moment would come to an end. It was beautiful. She was beautiful…a force in her own right. Sometimes, he got the feeling she didn’t know how truly amazing she was.

He lowered her slowly over the X.

Firmly on the ground, Rina leaned over from the waist and massaged her thighs. The tight straps were starting to take a toll on her.

“Stay there. I’ll disconnect you.” He secured the rope to the scaffold before walking over to her.
Scott detached her and helped her loosen the harness. When there was enough slack in the straps, she slipped the harness from her shoulders and pushed it past her hips to her feet.

“That was amazing.” She rubbed the sides of her ribcage and winced.

Concern made him drop the harness and lay his hands below hers on her waist. “I kept you up there too long.” Shit. He knew better than that. “Does it hurt when you breathe? How bad is it?”

“I’m fine. That experience was totally worth the pain.”

He’d rather have skipped that last part for her. “You really enjoyed it?”

“You know I did.” Rina looked up at him. “Thank you. This was exactly what I needed.” Seconds passed as she didn’t step back and he didn’t let her go. Then she moved a little closer.

Friendship. That’s what Rina wanted, and he respected that. But being near her like this chipped away at his resolve. The voice in his head telling him to let go was lost in the sound of his heart beating faster and echoing inside of him.

Rina laid her hands on his chest.

He leaned in a fraction, waiting and hoping she wouldn’t push him way. Scott lowered his mouth to hers and as soon as she opened to him, arousal flared. The control he’d held on to so closely around her for too many long weeks, days and hours weakened to nothing. Rina slid her arms around his neck and he wrapped his arms firmly around her. Every stroke and glide of their deepening kiss driving him nearer to pure want.

She pressed closer and her breasts pillowing against his chest short-circuited his brain to just one thought. More. Taking hold of her hips, he brought her against him, letting her feel how much he wanted her. But now wasn’t the time. Still he stroked his hands upward, gliding them under the hem of her shirt. The warmth of her skin seeped into him. He desperately wanted to kiss her there and any place the straps of the harness may have left a temporary mark or a bruise.

Rina eased back from the kiss.

He drew in an unsteady breath and stared into her eyes. “Just so you know, I’m not sorry that happened.”

“So does that mean we might get to do that again outside of the barn?”

Her gaze dropped as she slid her hands to his chest. His hopes sank in the silence. Had that kiss cost him everything?

She looked back up at him and smiled. “There’s more than a possibility that could happen again.”

“Bad Choices” should have been Rina Tillbridge’s middle name and it’s time to turn over a new leaf. But when stuntman Scott Halsey struts onto her property for his latest film, her impulsive alter ego threatens to make a comeback. The quintessential thrill-seeking stuntman has no designs on commitment. So why are all his red flags igniting white-hot passion…and inspiring dreams of a Hollywood ending?

Nina Crespo lives in Florida where she indulges in her favorite passions — the beach, a good glass of wine, date night with her own real-life hero and dancing.

Her lifelong addiction to romance began in her teens while on a “borrowing spree” in her older sister’s bedroom where she discovered her first romance novel.

Let Nina’s sensual contemporary stories and steamy paranormal tales feed your own addiction for love, romance, and happily ever after.

« REVIEW: In a Holidaze by Christina Lauren
Spotlight & Giveaway: Mistletoe and Mr. Right by Sarah Morgenthaler »

26 Responses to “Spotlight & Giveaway: Her Sweet Temptation by Nina Crespo”