Today it is my pleasure to Welcome author Pam Crooks to HJ!

Hi Pam and welcome to HJ! We’re so excited to chat with you about your new release, Her Texas Cowboy! 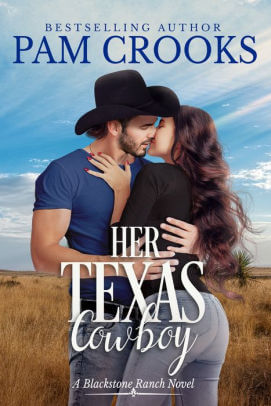 HER TEXAS COWBOY takes up where A COWBOY AND A PROMISE (Book #1 Blackstone Ranch series) leaves off. Lucienne Dunn and her best friend honor a promise they’d made on another friend’s deathbed–a promise that means they must leave their jobs behind in New York and travel all the way to the wilds of Texas to help with a vacation resort project. Lucienne has never been to Texas, has never seen a real cowboy, and detests dirt and manure. But she’s living a nightmare at home, and her escape to Texas offers a brief reprieve.

It doesn’t take Brock Paxton long to sense Lucienne is hiding something, especially when a hot-shot lawyer from New York starts snooping around on precious Paxton land. Brock is desperate to help save her from her troubles, but doing so would cost him his family’s legacy, and he has growing troubles of his own . . .

The following snippet is a fun way to show how out-of-place Brock thinks Lucienne is on his family’s ranch:

“Brock.” Her eyes turned electric blue, as if they’d shoot sparks at him if they could. “I need everything here.”
“Yeah?” He had no place challenging her on her definition of “need,” but he couldn’t help himself. “Define ‘everything.’”
“My sewing machine, for one. My ironing board and iron for another. Bolts of fabric. Some decorator pieces I found for the guesthouses that I need your mother’s approval on. And the luggage, well, I wasn’t sure what I’d need to have on hand, and I hear the shopping around here is, um, limited.”
His eyes narrowed. “That’s right.”
“I wanted to be prepared.”
“No malls. No shopping centers.”
“I know.”
“No Broadway shows to get all gussied up for. Not even a nightclub.”
“I know that, too.”
“Just little ol’ Paxton Springs.”

I always have a villain and a crime in my books, and HER TEXAS COWBOY was loosely based on an actual crime that happened here in my city. Also, Lucienne’s work with the non-profit she founded is inspired by a committee I served on at my church.

The beauty of writing series is introducing characters in one book that I can develop further in another. I already knew Lucienne fairly well in A COWBOY AND A PROMISE. The fun comes when I had to make her suffer from circumstances out of her control when I gave her her own book in HER TEXAS COWBOY.

Ditto with Brock. As a twin to the hero, he was necessary in the first book, allowing me to get a good feel for him. In HER TEXAS COWBOY, he’s feeling adrift without his brother, who now only has time for the new love in his life. When outsiders up to no good show up on his beloved ranch, he is thrown into the role of protector, not only for Lucienne, but his family, too.

I think most romance writers would agree the “first meet” between the hero and heroine is always a favorite. Here’s mine:

His eyes cracked open to a pair of black stilettos.
His lids dropped closed again. Damn. He must be hurt worse than he thought. Hallucinating from pain, seeing things that weren’t there. Should be cowboy boots planted on this floor, not a woman’s sexy high heels…
He forced his eyes open again. The stilettos were still there, next to him. Inches from his face. Nice ankles, too, and even nicer calves, sheathed in tight black jeans, showing off legs that could coax a man to keep looking higher—
“He’s coming to.”
The stilettos moved, but not away. They stayed by him. Close. He focused on those high heels. Easier than the voice, a woman’s voice. Different than Shandi’s. A voice he’d never heard before.

Like I mentioned above, Lucienne’s conflicts arise from another character’s criminal activities, from which she finds herself a victim. Since this is based on a true crime, I needed to make it as different as possible and the best fit for the story. Easier said than done! A critique partner and I brainstormed the plot again and again, and then my editor helped me re-work (and re-write it) again! Sheesh! But the end result is simpler and realistic.

Here is where I introduce Lucienne’s troubles to the reader in the first chapter, with her father and his attorney:

“She confessed immediately,” her father said. “She turned over all her records. She couldn’t have made it any easier for the feds.”
“The judge will look at that favorably.” Mason regarded her, as if his prediction would make everything right.
Which it wouldn’t. Not even close.
“She cooperated only because she got caught,” Lucienne said. “She’d still be milking the hospital dry today if she could.”
Her father frowned. “We don’t know that for sure, Lucienne.”
“Of course we do. Doesn’t every criminal keep committing their crimes until they can’t anymore?”
“She’d begun to taper off submitting those fake purchase orders for medicines and supplies,” Mason said. “Deposits to her personal account were on track to be half of what they were last year at this time.”
“Oh?” Lucienne’s brow shot up. “Is that supposed to make me feel better? And should I remind you it was my signature on those fake purchase orders she gave to the feds ?”
“I’m just saying she was pulling back. She knew what she was doing was wrong, and she was trying to stop.”
“Trying isn’t good enough!” Frustration spiked through Lucienne, hot and bitter. “She should’ve quit and confessed a long time ago.”
“In a perfect world, yes.” Even Mason appeared grim.
“In a perfect world, she would never have dragged me and my nonprofit into it. She would have recanted her accusations against me in a formal statement, admitting my innocence of her fraud.”
“Lucienne.” Her father reached toward her, as if he sought to take her hand, but the table was too big, and he couldn’t.
She fought for control. Now, more than ever, she had to be strong, because if she wasn’t, she’d shatter into a million pieces, and everything she’d ever done, had ever worked for, would be stolen from her forever.

Yep. This writing is all me. 🙂 And no, not much of a departure since I’ve been writing sweet romance for a number of years now. (Which is a huge departure from my Harlequin Historical days when love scenes were exceedingly important and expected.)

I hope they sigh and smile from being immersed in the world I’ve created. Specifically, a small town with characters whose lives are intertwined and that showcases the importance of family, land, and legacy–and that they are all worth fighting for, no matter the cost.

The third book of my Blackstone Ranch trilogy comes out March 16th. Woo-hoo! I hope y’all watch for MY KIND OF COWBOY featuring the last of the Paxton brothers. This book was such a delight to write, but bittersweet, too, since I had to say good-by to the characters that I loved so much. I think you’ll find the ending satisfying and a happy wrap-up to the series.

Giveaway: Ebook copies of A Cowboy and a Promise and Her Texas Cowboy

To enter Giveaway: Please complete the Rafflecopter form and Post a comment to this Q: HER TEXAS COWBOY is a ‘fish-out-of-water’ trope, the classic big-city-girl who lands in a small town with cowboys, of all people, as far away from corporate America as she could be. Have you ever found yourself somewhere where you felt completely out of place?

To give you an example, a few years ago, my husband and I attended a concert that featured a big name group who flashed bright laser lights for two and a half hours straight, played synthesized music, and sang songs not only that I didn’t recognize but I couldn’t understand the words to. And the audience was young. Way younger than me. The night dragged on, it was a total waste of my money, and I couldn’t get out of there fast enough!!

Excerpt from Her Texas Cowboy:

He can’t be fooled by a pretty face…

Brock Paxton’s love life is suffering, and there’s no woman around who can cure him—until a raven-haired beauty in stilettos drives into town to help at his family’s vacation resort. Her questions stir his suspicions and his instincts insist there’s more to her than she lets anyone see. So why does he still want her more than he should?

Facing false allegations back home in New York City, Lucienne Dunn has only one hope left to save herself: asking her father for help. Though his ruthless solution goes against everything she’s ever believed in, she must go along with his plan, even if it means clashing with a sexy, ex-military cowboy…

But the Paxtons refuse to sell, and there’s danger brewing on the ranch. Everything in Lucienne’s life is falling apart. How can she live without Brock when it does?

While expecting her first child (more years back than she cares to count), Pam Crooks read her very first romance novel, and she’s been in love with them ever since. She grew up in the ranch country of western Nebraska, and it was inevitable she’d eventually write lots of books about cowboys. Pam still lives in Nebraska with her husband (who is not a cowboy), four married daughters and nine perfect grandchildren.

She’s a long-time member of RWA and RAH, her local chapter. Pam is also one of the founders of Petticoats & Pistols, a popular blogsite for western romance. She loves to cook, hang out at her lake cabin, and decorate birthday cakes for anyone who will let her.
Website | Facebook | Twitter | Instagram | GoodReads |

« Spotlight & Giveaway: Broken by Evelyn Sola
REVIEW: Back in the Texan’s Bed by Naima Simone »

27 Responses to “Spotlight & Giveaway: Her Texas Cowboy by Pam Crooks”