Today it is my pleasure to Welcome author Sophie Sullivan to HJ!

Hi Sophie and welcome to HJ! We’re so excited to chat with you about your new release, How to Love Your Neighbor: A Novel! 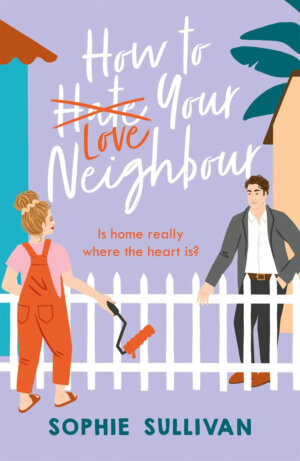 How to Love Your Neighbor is an enemy to lovers, fixer-upper book. Noah Jansen is the brother of my male mc in Ten Rules. He follows his brother to California intending to put down roots and figure out what he really wants out of life. Gracie Travis has inherited the tiny bungalow next door to Noah’s sprawling home. She already knows what she wants out of life: her career as an interior designer, a family to call her own, and this house. Noah has plans to get in her way and she has plans not to let him.

If she’d had to lay down money on which of her motley crew would cause the most trouble, Grace Travis would not have picked the chihuahua. As she waited for Tequila, one of the two bull mastiffs, to finish sniffing an apparently odorous swatch of sidewalk, she looked toward the water. She loved it here.

There are several dogs, a grumpy old man, and a nod to Trading Spaces, the first design show I was ever hooked on. There is witty banter, some unfortunately awkward moments, and lots of kissing.

Gracie is an almost thirty year old woman who is finishing up her schooling to be a graphic designer. She’s got a tough exterior, having been knocked down more than once. I think the most pleasantly surprising thing about Grace is that even with reasons to see the glass as half empty, she doesn’t.
Noah is a classic middle child who is much more than he seems to those outside of his circle. Seen as the joker and the playboy, I think what’s most surprising about him is his desire to be truly seen and loved even when he messes up.

Oh, this is a fantastic question. The following scene is still in their enemy phase but Noah has found a crack in Grace’s armor: coffee.

God. He had absolutely no right to look sexy in running gear at this time in the morning when she woke up like a bear two weeks early from hibernation. He left the guys he was talking to and sauntered over, amusement etched on his stupid-gorgeous features.
“Trying to break something else of mine?” One side of his mouth quirked up even as he tipped his chin down.
Grace clenched her fingers into fists at her side, tried to push her temper down. “Why are you making this much noise at this hour on a Sunday?”
Noah had the nerve to laugh. “Wow. You do not wake up friendly.”
She pointed to the pressure-washing dude and gestured to the others, who were looking their way. “Not when I’m woken by a herd of steel-toe-booted elephants, blasting music and water when I’ve worked all night.” Okay, slight exaggeration. She tended to wake up on the grumpy side anyway, but he wasn’t helping.
“All night? Pretty sure I heard your car roll in just after midnight.” He leaned closer, his gaze more intense. “What kept you up all night, Gracie?”
You. Wondering where I’m going to get the money to paint my half of the fence. She poked the air, just short of jabbing him in the chest. “It is too early for all of this. There are laws against this sort of thing. Plus, it’s unneighborly.”
There. That ought to put him in his place. Instead, he crossed his arms over his chest. “Correct. Bylaws that state I can make noise after eight on a Sunday.” He looked at his fancy watch, then back at Grace. “It’s almost ten. Speaking of being unneighborly, are you always this grumpy in the morning?”
Her retort died in her mouth. No. Not to this extent. “I need coffee.”
Without a word, Noah turned on his heel and walked away. Disappearing behind a truck, he was back in under a minute with a white to-go cup bearing her favorite logo. Yeah, yeah, she craved the competition. What Ellie didn’t know about wouldn’t hurt her.
Noah handed her the coffee. “Untouched. It’s mine. One of the guys brought it. There’s cream and sugar in it. Maybe not the way you take it but consider it a peace offering.”
The stiffness went out of her stance, her lungs deflating, as her pulse did a double beat. Which Noah is this? Please don’t have a third persona. It’s too hard to keep up. “You don’t have to do that.” The fact that they took their coffee the same way did not mean anything.
“I wouldn’t do it if I didn’t want to. Take it,” he said, smiling as he extended his arm.
A peace offering. Did that mean he was willing to negotiate on the timing of the fence painting and repair? Grace took the drink, brought it to her lips, taking a generous sip while telling herself the actual glow inside of her was from the sweet taste in her mouth, not the way Noah’s fingers brushed her own.
“Hmm,” Noah said, leaning a hip on the fence.
With both hands around the warm cup, she glanced at him through lowered lashes. “Hmm, what?”
“Just making mental notes. The way to calm Gracie in the morning is coffee. Noted.”
She narrowed her gaze. “Grace.”
“Grace before coffee but Gracie after. Your whole body softened with your first sip.”

I want them to fall for the main characters, to root for them. I hope, when they close the book, they have a smile on their face and they think of Grace and Noah now and again, wish they could check in on them and see how they’re doing.

At the moment of answering these questions, I’m actually 1/3 of the way through my edits on Wes’ story. He’s the oldest Jansen brother who joins the other two in California. In addition to that, I’ve got some cozy mysteries coming out under my Jody Holford name so I’m working on the third in a new series. I’m also writing a fun new series that I hope will one day hit the shelves.

Giveaway: One print copy of How to Love Your Neighbor by Sophie Sullivan –  US Winner Only

To enter Giveaway: Please complete the Rafflecopter form and Leave a comment with your thoughts on this book…

A frothy, effervescent romantic comedy from the author of Ten Rules for Faking It, Sophie Sullivan delivers another read that will have you delighted from start to finish.

Sexy, grumpy neighbor who is going to get in the way of your plans? Check. Unfortunately.

Grace Travis has it all figured out. In between finishing school and working a million odd jobs, she’ll get her degree and her dream job. Most importantly, she’ll have a place to belong, something her harsh mother could never make. When an opportunity to fix up—and live in—a little house on the beach comes along, Grace is all in. Until her biggest roadblock moves in next door.

Noah Jansen knows how to make a deal. As a real estate developer, he knows when he’s found something special. Something he could even call home. Provided he can expand by taking over the house next door–the house with the combative and beautiful woman living in it.

With the rules for being neighborly going out the window, Grace and Noah are in an all-out feud. But sometimes, your nemesis can show you that home is always where the heart is.

SOPHIE SULLIVAN is a Canadian author as well as a cookie-eating, Diet Pepsi-drinking, Disney enthusiast who loves reading and writing romance in almost equal measure. She writes around her day job as a teacher and spends her spare time with her sweet family watching reruns of Friends. Ten Rules For Faking It is her romcom debut novel, but she’s had plenty of practice writing happily ever after as her alter ego, Jody Holford.
Website | Facebook | Twitter | Instagram | GoodReads |

34 Responses to “Spotlight & Giveaway: How to Love Your Neighbor by Sophie Sullivan”