Hi Sawyer and welcome to HJ! We’re so excited to chat with you about your new release, Jett! 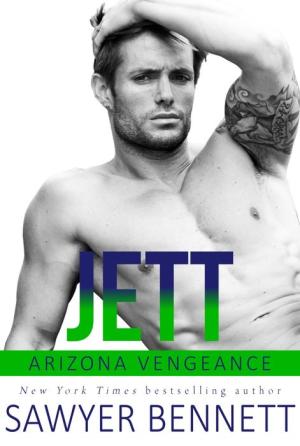 Jett is a friends-to-lovers, workplace, single mom hockey romance. *whew–that’s a mouthful* He’s a hockey hunk who falls for the new VP of Digital Marketing. She’s a single mom who doesn’t want anything to do with him, so he friend zones himself instead.

I love that Emory is so reserved and protective of her daughter and her life, but that Jett isn’t scared by any of that. He knows she’s worth the effort, and he makes room for her and her reservations…

“I’d like to see you again. Take you on a date.”
Emory’s not surprised by my request. Her eyes don’t flare wide and she doesn’t jerk her chin in as if my idea is preposterous. Instead, she smiles sadly. “My life is complicated right now.”
“Mine isn’t,” I say cheerily. “I’ve got room for complicated.”

Jett falls for Emory the first time he sees her, which is actually featured in Steele, the previous book in the series. Here’s a look at Jett’s lust-at-first-sight…

“Mr. Carlson has decided to focus our digital marketing efforts on our social media platforms, and he’s hired an expert to guide us. Now, I’m so old school I don’t even know what that means, but you are young enough to. Without further ado, I’m going to introduce the new Vice President of Digital Marketing and Analytics to you.”
He motions for one of the trainers to open the door, then waves someone in.
And if a wave of electricity went through the room over the announcement of Baden, a tsunami of pure male pheromones swarms through at the sight of the woman who enters.
She’s tall and lithe, wearing a form-fitting purple dress with no sleeves and a wide black belt. The hem comes down to just below her knees, and her black stilettos add a good four inches onto her height while showcasing the slight definition of her calf muscles. Her hair is midnight black, pulled into a severe bun at the nape of her neck, but that only highlights her flawless face, which is reminiscent of Angelina Jolie. I’m sure it’s the full, puffy lips that have me thinking that. Honestly, though, it’s her light blue eyes surrounded by black-framed glasses that make her beauty unique.
She struts like a woman on a mission, carrying an iPad with her to the podium.
Jett groans, and I cut my eyes his way. His tongue is practically hanging out of his head. “Is she a teacher? Because I’m totally hot for teacher.”
I snort, glancing at the woman. Those glasses with her hair pulled back, which makes her appear a bit like a disciplinarian, definitely give off a teacher vibe. But the coach said she’s a vice president in the front office, so she holds a high position, even though she can’t be more than mid-twenties.
Jett’s not the only one affected by her beauty as many of the players are murmuring God knows what to their fellow teammates.
Coach Perron smiles at her as she reaches the podium, then he steps away. The woman takes his place and scans the arena before her, six rows filled with big, burly hockey players, a good number who are not-so-secretly lusting after her. Her blue eyes don’t even blink, not intimidated in the slightest.
“Hello,” she says into the microphone. “My name is Emory Holland and as Coach Perron said, I’m the team’s new VP of Digital Marketing and Analytics.”
“Fuck me all to hell,” Jett mutters as he slumps in his seat. “She has a British accent. Why does that make her hotter?”
I snort, but I don’t look his way. If she’s being introduced on a game day there must be some measure of urgency, so I pay attention.
“For those who don’t understand my title,” she continues in that crisp, dry accent that has just a bit of a Mary Poppins lilt at the end, “Basically, I control every aspect of the Vengeance social media as well as the website marketing. Mr. Carlson feels we must continue to build on the momentum of our Cup win and resulting popularity to increase our fan base.”
Someone behind me challenges that—politely, at least. “I’m pretty sure our fan base is already set and fairly expansive.”
Miss Holland smiles, nodding in affirmation. “True, but it can be bigger. This team went from underdogs to champions in a year. However, our research shows the majority of Vengeance fans are still congregated here within your home state with little reach outward.”
“Holy shit,” Jett murmurs. “Kill me now… I’m in love.”

I just love Emory. She’s so confident, but at the same time, when it comes to taking the next step with Jett, she’s kind of awkward. Because she’s been hurt, and it’s been a minute since she’s had a physical relationship, and she’s a little scared. And I think her vulnerability is pretty adorable!

Jett’s car is really nice, and I have no clue what it is. Never much paid attention to those things, but I also know he makes millions and can afford whatever he wants. And in the weeks I’ve known him—since that first day he hit on me and I coldly turned him down—I’ve never had the need or opportunity to even consider his wealth.
But now we’re in what’s a very expensive vehicle, heading to his downtown condo, which I’m betting is posh and only for the elite of Phoenix, and wondering what I’ve gotten myself into.
Sex, Emory.
That’s what you’re getting yourself into.
A tiny giggle escapes me, because I’m nervous and this is so awkward.
“What’s so funny?” Jett asks, his tone curious and filled with good nature as he glances at me.
I snicker, softly at first, then snort as I turn my head his way. He frowns, probably wondering if I’ve managed to go crazy in the two minutes since we’ve gotten in his car.
“Emory?” he asks hesitantly, before putting his eyes back on the road.
I fumble at the opening of my purse sitting on my lap and reach in, pulling out a small box of condoms. I hold them up for him to see. His eyes come back my way, see the box, and then his eyebrows climb right up his forehead.
A second passes, then two, before he says, “You certainly are prepared.”
I laugh again, shoving the condoms back down into my purse. I clamp down tight, forcing myself to stop this unholy chortling sound, then end up coughing.
“I’m sorry,” I finally say, shaking my head. Another snort, and I clap my hand over my mouth.
I risk a glance at Jett and his eyes are crinkled in amusement, perfectly full lips quirked. “Nervous, huh?”
“Oh, am I ever,” I drawl as I remove my hand from my mouth. Then I ramble. “I mean… lost my virginity my senior year in high school. That was an event I hardly even remember because it was that unremarkable. Then there was the proverbial partying and a few one-night stands in college, and then… well, I met Felicity’s dad and that’s all there was. Just him.”
I sneak another peek at him, and while he’s looking back at the road, I can see understanding in his expression. “I’m guessing it’s been a while for you, huh?”
Nodding, I admit, “A long time. A long, long time.”
“Well, you’re not getting graded on this assignment,” he assures me. “And we don’t have to do anything but have a drink.”
A sigh escapes me, my body’s way of saying just calm down. “I know. But…”
The silence is heavy as I go super shy all of a sudden.
“But what?” Jett prompts.
“It’s just… it’s hard to explain. Being a parent—especially a mom, no offense to dads—especially a single parent, you put yourself last. Everything else is put ahead of your own wants and needs. So, I’m rationalizing that I’m finally taking something for myself, and that’s good. I deserve it. But at the same time, the thing I’ve chosen to take—”
“Which would be me?” he interrupts with a grin.
I nod with another giggle. “That would be you, and a casual type of fling… well, it’s just awkward. I’ve chosen to do something totally out of my comfort zone and I’m out of practice and what if I’m awful—”
Jett takes my hand and squeezes it, the move so sudden my words cut off. “You can’t be out of practice,” he assures me. “It’s like riding a bike. And if you are out of practice, I’ll give you plenty of opportunities to practice. It won’t be a hardship on me.”

Jett is the perfect summer read! Flirty and fun, hot and sexy, with low angst and a beautiful love story.

I’ve got more hockey coming your way! Riggs will be the next Arizona Vengeance release on October 27. I’m also working on more in the Jameson Force Security series, with Code Name: Tiara releasing September 7 and Code Name: Disavowed on December 14.

Giveaway: Signed paperback of JETT by Sawyer Bennett. US only.

To enter Giveaway: Please complete the Rafflecopter form and Post a comment to this Q: Friends with benefits–yes or no?

I love my life—the thrill of being on the ice as part of the Arizona Vengeance, the rush of winning, the adoration of the fans. And if that adoration means I don’t have to spend the night alone, well even better. I’m content being single and always ready to mingle.

But the day Emory Holland walks into a Vengeance team meeting my attention is caught like never before. I can tell right away she’s full of smarts and sass, and the fact that she’s hot as hell sure doesn’t hurt either. She immediately shuts down my advances, so I opt for the road less traveled—straight to the friend zone.

My approach works like a charm, and when she invites me into her bed for a no-strings, friends-with-benefits arrangement, I vow to give her everything I have. She’s been hurt before, and if I’m able to help her heal while giving her a spectacularly satisfying time *pats self on back*, then I’ll be happy.

Or at least that’s the lie I keep telling myself as the time ticks down on the final buzzer of our “relationship”. Now the real question is, can I score the winning goal in a game neither of us realized we were playing?
Book Links: Amazon | B&N | iTunes | kobo | Google |

« Spotlight & Giveaway: Billionaire’s Road Trip To Forever by Michelle Douglas
REVIEW: Secrets of a One Night Stand by Naima Simone »