Hi Terry and welcome to HJ! We’re so excited to chat with you about your new release, Joy to the Wolves! 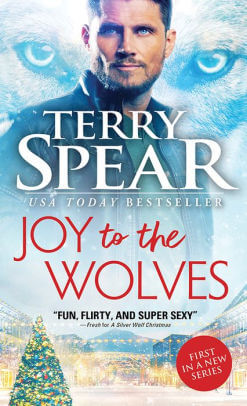 It’s nearly Christmas and Brooke Cerise is ready for her open house at the antique and gift shop, when she finds a reindeer calf on her back patio. Police Detective Josh Wilding shows up to question her—since the reindeer calf belongs at his and his brother’s ranch. He thinks she’s guilty; she wants him to go away so she can enjoy her open house. She intends to do what her great aunt wanted—to keep the shop until the time when she can sell it and finally do something else with her life. But one little reindeer and one hot, sexy detective red wolf change everything for her.
Josh has no intention of getting hooked on a red wolf who might have been involved in stealing the reindeer calf from his ranch. He is a police detective, after all. And she has motive and the stolen property. But the more he learns about the trouble she inherited when she received the antique shop from her deceased great aunt, the more he finds ways to see her—to serve and protect. He just has to learn who is causing all the trouble and stop them before it’s too late.

When Josh arrived at the reindeer ranch, he parked his car and headed inside the sprawling ranch house to have pizza and beer with his brother.
“What was that all about?” Maverick frowned at him as he brought the pizza out of the oven.
Josh pulled a couple of beers out of the fridge, and they sat at the table to enjoy their cheese, pepperoni, hamburger, and sausage deep-­dish pizza. “If you mean questioning the she-­wolf at her shop for being in possession of Jingles, I was doing my job.”
“She’s a red wolf.”
“I noticed.” Josh pulled off a slice of pizza and took a bite.
“She wouldn’t have done it.”
“She had motive.”
Maverick shook his head. “You know, when you’re like this, it’s because you’re interested in the woman but you don’t want to show that you are.”

When Josh arrived at the reindeer ranch, he parked his car and headed inside the sprawling ranch house to have pizza and beer with his brother.
“What was that all about?” Maverick frowned at him as he brought the pizza out of the oven.
Josh pulled a couple of beers out of the fridge, and they sat at the table to enjoy their cheese, pepperoni, hamburger, and sausage deep-­dish pizza. “If you mean questioning the she-­wolf at her shop for being in possession of Jingles, I was doing my job.”
“She’s a red wolf.”
“I noticed.” Josh pulled off a slice of pizza and took a bite.
“She wouldn’t have done it.”
“She had motive.”
Maverick shook his head. “You know, when you’re like this, it’s because you’re interested in the woman but you don’t want to show that you are.”

Giveaway: A paperback copy of JOY TO THE WOLVES by Terry Spear

To enter Giveaway: Please complete the Rafflecopter form and Post a comment to this Q: What would you do if you found a reindeer on your patio and a hot wolf who was there to interrogate you about it?

Excerpt from Joy to the Wolves:

By the time she went to bed, she realized what a fortune she could have just in vinyl records. Even at the low price of a few hundred dollars per record, she could have between $50,000 and $200,000. Her great-­aunt had managed to collect a few first editions, and they were worth from several hundred dollars to $35,000 apiece.
Things were looking up.
Dressed in her red flannel pajamas covered in little reindeer—­which made her think of Jingles—­and lying in bed, Brooke placed her arms behind her head on her pillow, looked at the ceiling, and smiled. This had been one perfect open house, as crazy as the day had started out. She took a deep breath and thought about running in the woods as a wolf, the perfect way to end an already great day.
Her phone on the bedside table played a little of the “Carol of the Bells,” and she frowned, wondering who would be calling her at eleven at night. When she looked at the caller ID, she saw it was Josh Wilding.
What now? He’d better not want to question her any further tonight about how Jingles had arrived in her courtyard this morning.
When she answered the phone, Josh asked, “Did you lock your gate tonight?”
“I’m in bed, trying to get to sleep. Some people need their sleep, you know. Oh, but I was surprised and pleased to find a new shiny latch on the gate.”
He didn’t say anything, so she figured he hadn’t replaced the latch. She let out her breath. “I hope you find your real suspect soon.” Then she hung up on him.
She really wanted to sock him! He had no business calling her at this time of night, making sure she did what he’d told her to do.

When Brooke Cerise hung up on Josh, he chuckled. She had a temper to go with the fiery-­red hair. He could envision her cheeks flushing, like they’d done earlier when he’d questioned her about Jingles. He meant to ask her about the unknown male wolf who’d been at their place, tampering with their security equipment. He wanted to know if she knew any other male wolves. If she’d heard anything the night before that would indicate someone had slipped into her courtyard where they’d left the reindeer. But the first words out of his mouth had been about her locking her gate—­his main concern.
When he checked the gate to her courtyard earlier, he’d smelled the scent of the male wolf there too. In the courtyard. But not in the store. Would Josh smell him in her house?
Once he’d discovered her gate latch wasn’t latching properly every time, Josh had run to the hardware store on the next block over and picked up a replacement, hoping that would keep the gate from opening on a whim. He was glad she had been pleased, but he hadn’t even had time to say he did it before she hung up on him. He smiled again.
Then he ran his hands through his hair and looked out the window at the ranch and the barn where the reindeer were sleeping. He knew the thief couldn’t have been from one of the reindeer ranch competitors. If he had been, the whole thing had backfired because, according to Maverick, they’d received more business than they’d had all season with all the media coverage. The chances a competitor would hire a wolf to do the sabotage would be practically nil. But it did make Josh think they’d made an enemy of a wolf. Someone they didn’t know.
He kept thinking about Jingles and how happy he’d been in Miss Cerise’s shop. How she’d taken him inside to keep an eye on him. Or hide him? Except if that had been her intent, it hadn’t worked, because all her customers had shared on social media about the little lost reindeer. It had made for a great special-­interest story for the news at Christmastime.
“Do you know where your reindeer is at this hour?” one woman had texted with a cute picture of Jingles sleeping underneath the Christmas tree in the shop. Another had said, “Have you hugged your reindeer today?” Then she’d had someone else take a picture of her hugging Jingles.
He found the store’s Facebook page and read through the hundreds of comments. “I wish we had a reindeer ranch near us.” “Aww, isn’t he cute.” “I want one for Christmas.”
He smiled. At least having Jingles there had been good for business. Then he lost the smile. He had other cases to investigate tomorrow, but as soon as he had time, he was dropping by the antique shop to question the little red wolf some more. He had to know if she knew any other wolves in the area. And if she knew anything about working with security equipment. Or knew anyone who could work on security equipment. Her reaction should help him judge if she knew something about their video equipment.

As Christmas approaches, red wolf shifter Brooke Cerise unexpectedly inherits an antique shop in Portland, Oregon. But when a missing reindeer calf turns up on her property, she becomes embroiled in a kidnapping case and the primary suspect of far-too-intriguing shifter Detective Josh Wilding.

Josh doesn’t intend to fall for the mysterious new woman in town, but Brooke gets under his skin from the moment they meet, and he can’t help his instinct to protect her. These red wolves are both on the hunt for love, but there’s a mystery to solve before they can enjoy their holiday happy-ever-after.

USA Today bestselling author Terry Spear has written over forty paranormal romances. Heart of the Wolf was named a Publishers Weekly Best Book of the Year and Billionaire in Wolf’s Clothing was a Romantic Times Top Pick. A retired officer of the U.S. Army Reserves, Terry also creates award-winning teddy bears. She lives in Spring, Texas.

30 Responses to “Spotlight & Giveaway: Joy to the Wolves by Terry Spear”