Hi Sawyer and welcome to HJ! We’re so excited to chat with you about your new release, Kane! 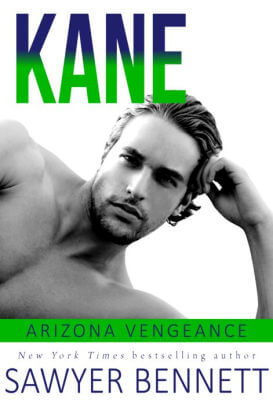 Kane is an EPIC friends-to-lovers hockey romance standalone. Kane and Mollie have been besties since college, but have never crossed that ‘friend’ line. Well, fine. There was that *one* time when they got really drunk, but that was it. I swear. 😉 Mollie comes to Kane’s house for a visit and things in their friendship ending changing forever.

Opening my arms wide, I say, “If you need that type of itch scratched, Molls, you’ve got me right here to take advantage of.”

It’s always fun to write an Arizona Vengeance book, because it’s a little like visiting a big, boisterous family. We get a check-in with all of the former Vengeance couples in Kane, plus a peek at some future stories. But in the meantime, a FUN visual for you…there is a scene that involves a very naked Mollie and some strategically placed ribbon. Imagine, if you will, meet at my laptop, writing this scene and twisting back and forth trying to make sure everything wrapped in the correct direction and made sense. It was like my own little game of Twister to write that scene.

Kane and Mollie have been friends for years, but when they first met, they were connected by the fact they were both Southern Californians attending college in Boston. And, of course, there was a bit of physical attraction too. 😉

What about swooning? Kane is such a sweet guy, and he’s all in where Mollie is concerned. Here’s a little look at him taking her to the rink for a little fun…

“When are you going to tell me why we’re here?” Mollie asks for what might be about the tenth time since I told her I had a surprise for her.
“You’ll see when we get there,” I reply, which is the same reply I’ve given her every time. Patience has never been one of Mollie’s virtues.
On the bottom floor of the arena, which sits underground, there’s a hallway that goes around the entire rounded building perimeter. I take her past janitorial services, the electrical room, the family gathering room, the locker room, and then straight to the small tunnel that connects out onto the ice.
“Whoa,” she murmurs as we walk up to the swinging gate that would let us step directly onto the ice. She releases my hand, places her palms on top of the gate, and leans over. Mollie’s gaze sweeps the empty stadium, the seats, and the glistening rink before us. “This is so cool.”
“About to get cooler,” I reply as I reach down to pick up the two pairs of ice skates I’d placed there earlier. “Let’s get you out on the ice.”
She turns to me, eyes wide, glancing only briefly at the skates I’m holding up. “Really?”
“Really,” I reply with a laugh.
Mollie doesn’t know how to ice skate. It’s a running joke with us. I mean, she’s a southern California girl, so why would she have ever learned? During my time in college, there wasn’t time to teach her—not that she wanted to learn. But over the years, we’ve teased each other over the fact that my best friend doesn’t know how to ice skate. It’s inexcusable now.
We sit on the rubber matting to put on our skates. I help her up, then keep a strong hold on her arm and waist as I guide her over the tiny lip created by the swinging door and onto the ice.
Her legs immediately start to spread as she tries to figure out her balance. Being on ice is no different to me than walking on flat ground in tennis shoes, so I’m easily able to hold her steady. After a few pointers, I take her hands in mine. With me skating backward and her just holding on for the ride, I start to lead her around the rink.

Kane is such a fun friends-to-lovers journey. There is a little bit of seriousness tossed in, but overall, this is a light-hearted read where two friends find their footing to being so much more. It honestly just made my heart happy to write their story and I hope readers love their journey is much as I do.

I’ve actually just announced an all-new series coming in 2021! The Chronicles of Stone Veil series is a five-book urban fantasy/paranormal romance kicking off on February 9 with the release of The Revelation of Light and Dark. Stop by my website to get full details on that series! I’ll also be continuing the Arizona Vengeance and Jameson Force Security series in 2021 as well.

Giveaway: A signed paperback of Kane. US only.

To enter Giveaway: Please complete the Rafflecopter form and Post a comment to this Q: What is your favorite trope?

Are you ready for Kane Bellan’s story?

I have a problem.

I’m not really sure. Here’s the deal.

There’s this girl—isn’t that how it always starts?—and her name is Mollie. I like her. I mean really like her. I hope that doesn’t make me seem less manly than my professional hockey player persona implies. But here’s the issue—she’s my best friend. The one person I can count on for everything, who’s been there with me for all the moments, big and small.

When Mollie shows up at my door, travel weary and scared following an incident with an ex, my instinct to protect her goes into overdrive. It’s then that I know she’s more than just my best friend and the skates are swept out from under me when I find out she feels the same way.

Our transition from friends to lovers to potentially something more is seamless, the Arizona Vengeance is back on the ice looking for a repeat championship, and my life has never been better. Just when I think I’ve got it all figured out, the realities of us both having careers which keep us on the road put our blossoming relationship on ice.

It feels like the game just went into overtime and I’m on the verge of either the biggest win or most disappointing loss of my life. And losing is never an option.
Book Links: Amazon | B&N | iTunes | kobo | Google |