Today it is my pleasure to Welcome author Julia London to HJ!

Hi Julia London and welcome to HJ! We’re so excited to chat with you about your new release, Last Duke Standing! 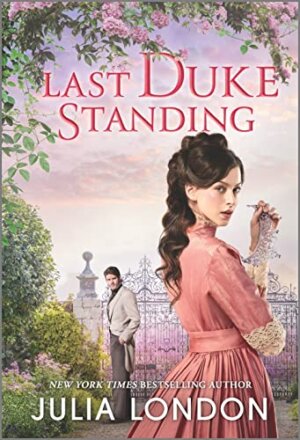 Crown Princess Justine Ivanosen is going to be the queen of Wesloria sooner rather than later—her father, the king, is dying from tuberculosis. But the Prime Minister is dead set against having a young woman ascend the throne without a man to guide her. Imagine the chaos and carnage! So he talks her mother, the queen, into employing the Victorian equivalent of matchmaker to the stars. They pack Princess Justine off to England to apprentice with Queen Victoria, with strict instructions to Lady Aleksander that she is to return with a fiance. The prime minister won’t leave the selection of the lucky fellow to chance, and persuades one of his old cronies to send his handsome son to London to “help” in the selection process. In other words, spy.

William Douglas, the future Duke of Hamilton, has been around the block a time or two, and met the princess several years earlier. She was hardly more than a girl then, and what he remembers is a snippy little princess who didn’t like losing parlor games. Granted, the parlor games were being played at a Christmas party where everyone was three sheets to the wind, but he remembers it all pretty darn well all the same. The last thing he wants to do is babysit that child. But he does as his father is making him do, and discovers the girl in his memory is now a very attractive grown woman. She likes the term Your Royal Highness a little more than is practical, and expressly forbids him from offering his advice. So of course, he’s going to. And he’s got an opinion about every man that comes to meet her. Pretty soon, it’s apparent that he may be the last duke standing.

“To begin, you will recognize that I am to be queen soon, and you are not at liberty to tell me what to do, under any circumstance.”

His eyes widened with surprise. “Now there’s a winning scheme if ever I heard one—befriend others by beaning them on the head with your scepter.”

I based Princess Justine in part on Queen Victoria. Queen Victoria was 18 when she took the throne after leading a very sheltered life. Needless to say, in her newfound freedom, she made a few mistakes. She also had a healthy sexual appetite, which we know because she wrote about it in her diaries. I thought it would be awesome to have Queen Victoria pass these things along to Justine, mostly over cake. In her later years, Queen Victoria ate a lot. I am hoping she had lots of cake.

There is a scene where one suitor brings a wagonload of flowers. I spent a lot of research time (translation – procrastination time) scrolling through Instagram to look at flowers in England. I found a couple of sites that take the most gorgeous pictures, and now I download their photos to use as wallpaper for my phone. It’s so nice to see a bouquet of peonies when you open your phone in the morning.

I created my own “European” language for the series. It’s a mix of Estonian, Latin, Danish, German, and a little bit of nonsense thrown in. It was fun!

It depends on the idea. Sometimes the hero comes to me first, but for this series, it was the heroine. I was attracted to the idea of a young woman about to be queen. She is in her twenties, and when I think of myself at that age, I can’t imagine sitting on a throne and making big decisions. I mean, I still look back and think it’s a small miracle I graduated college and got an actual job. It was pretty touch and go from time to time. 🙂 Being a queen? Nope. No thank you. I’m much better sitting in a corner and daydreaming.

I go back to the flower scene again. A suitor brings them, and William, the hero, is allergic to something in the mix. He is determined not to leave the princess alone with the other guy, but his eyes are swelling shut, his nose feels like a balloon, and he can’t stop sneezing. Someone even says his eyes are getting fat. I amused myself very much with this scene. Here’s a snippet:

As Aggiani whispered into Justine’s ear, Lady Aleksander whispered to William. “You can’t deny that they make a lovely couple. Can you imagine the beautiful children they would bring into the world?”
He gave her a startled look. “That’s putting the cart before the horse, aye?” From where he was sitting, the peacock Aggiani was the worst possible match for Justine. “I think, madam, that you do no’ know my old friend as well as you think.”
“Really? Tell me everything about the man you are not really acquainted with, but whom you refer to as your old friend.”
William gave her a withering look, which lost its intended impact when the butler leaned between them and poured tea. William sneezed again. His eyes were watering, and his nose felt even larger. He had a decision to make—he could sit here and watch Aggiani charm his way into a crown, or he could remove himself before he couldn’t breathe at all.
He could do without breath for a few more minutes.

I am finishing up The Duke Not Taken, (9/28/22), which is the next book in this series. It’s about Princess Justine’s younger sister, Princess Amelia. She is Princess Margaret to Justine’s Queen Elizabeth and has a reputation for looking for love in all the wrong palaces. After that, I have two more books to write for the A Royal Match Series, and a rom-com.

To enter Giveaway: Please complete the Rafflecopter form and Post a comment to this Q: Queen Elizabeth just celebrated an awesome and inspiring seventy years on the throne. She was twenty-five when she became queen, about the age Justine is. I told you what kind of queen I would have been—a messy one. What kind of queen would you have been at 25? Knowing yourself, is that something you think you would have done well? (Bonus – you get to keep the wardrobe and the jewels no matter what you decide)

CHAPTER ONE
1855
In the capital city of St. Edys
Wesloria

Excerpted from The Last Duke Standing by Julia London. Copyright © 2022 by Dinah Dinwiddie. Published by arrangement with Harlequin Books S.A.

When Crown Princess Justine of Wesloria is sent to England to learn the ropes of royalty, she falls under the tutelage of none other than Queen Victoria herself. She’s also in the market for a proper husband—one fit to marry the future Queen of Wesloria.

Because he knows simply everyone, William, Lord Douglas (the notoriously rakish heir to the Duke of Hamilton seat in Scotland, and decidedly not husband material), is on hand as an escort of sorts. William has been recruited to keep an eye on the royal matchmaker for the Weslorian Prime Minister, tasked to ensure the princess is matched with a man of quality…and one who will be sympathetic to the prime minister’s views. As William and Justine are forced to scrutinize an endless parade of England’s best bachelors, they become friends. But when the crowd of potential grooms is steadily culled, what if William is the last bachelor standing?
Book Links: Book Links: Amazon | B&N | iTunes | kobo | Google |

Julia London is a New York Times and USA Today bestselling author of over fifty novels of historical and contemporary romance. She is the author of the popular Highland Grooms series as well as A Royal Wedding, her most recent series. Julia is the recipient of the RT Bookclub Award for Best Historical Romance and a six-time finalist for the prestigious RITA award for excellence in romantic fiction. She lives in Austin, Texas. Visit her at www.julialondon.com.
Website | Facebook | Twitter | Instagram | GoodReads |