Today, HJ is pleased to share with you Lauren Ho’s new release: Lucie Yi Is Not a Romantic

An ambitious career woman signs up for a co-parenting website only to find a match she never expected, in this unflinchingly funny and honest novel … 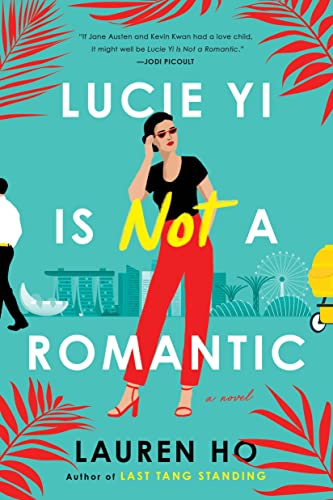 Management consultant Lucie Yi is done waiting for Mr. Right. After a harrowing breakup foiled her plans for children—and drove her to a meltdown in a Tribeca baby store—she’s ready to take matters into her own hands. She signs up for an elective co-parenting website to find a suitable partner with whom to procreate—as platonic as family planning can be.

Collin Read checks all of Lucie’s boxes; he shares a similar cultural background, he’s honest, and most important, he’s ready to become a father. When they match, it doesn’t take long for Lucie to take a leap of faith for her future. So what if her conservative family might not approve? When Lucie becomes pregnant, the pair return to Singapore and, sure enough, her parents refuse to look on the bright side.

Even more complicated, Lucie’s ex-fiancé reappears, sparking unresolved feelings and compounding work pressures and the baffling ways her body is changing. Suddenly her straightforward arrangement is falling apart before her very eyes, and Lucie will have to decide how to juggle the demands of the people she loves while pursuing the life she really wants.

Enjoy an exclusive excerpt from Lucie Yi Is Not a Romantic

Excerpt. ©Lauren Ho. Posted by arrangement with the publisher. All rights reserved.

Giveaway: A print copy of LUCIE YI IS NOT A ROMANTIC by Lauren Ho

Lauren Ho is a reformed legal counsel who now prefers to write for pleasure. Hailing from Malaysia, she is currently based in Singapore, where she’s ostensibly working on her next novel while attempting to parent. She is also the author of Last Tang Standing.

22 Responses to “Spotlight & Giveaway: Lucie Yi Is Not a Romantic by Lauren Ho”