Hi Jade and welcome to HJ! We’re so excited to chat with you about your new release, Lyon Hearted!

Hello, and thanks so much for having me! 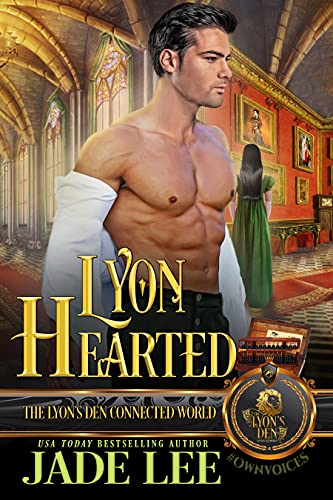 Last year, I launched the Lyon’s Den shared world with Into the Lyon’s Den. It was my job to set up the gaming hell—the Lyon’s Den—with interesting characters. One of the people I created was the Abacus Woman—Li-Na, a Chinese woman who handled all the money. She never spoke above a whisper and every young buck wanted to try to claim her as his own. Almost instantly, readers wanted to know more about her. Who was she? How did she come to London?

Lyon Hearted is Li-Na’s story. She’s been trapped for five years doing nothing but painting in the mornings (her secret love) and accounting for the Lyon’s Den. When a handsome art dealer—Lord Daniel—sees her painting one morning, he is determined to sell her art to all the Chinoise-mad aristocrats. But Li-Na’s paintings mean a great deal more to her than just spots on the canvas. Lord Daniel and Mrs. Dove-Lyon (the hell owner) hatch an exciting scheme to get Li-Na to trust him. It starts in London, goes to a remote corner of Cornwall, and then lands them finally in Carlton House in front of the Prince Regent. It’s a fantastic ride, and I was so lucky that I got to write this story.

Today was a squiggly day.

Lord Daniel sees Li-Na’s art. He’s an art dealer, and she’s painting in the Chinese way. Given that the ton was mad for all kinds of Chinoiserie, he could make a fortune selling her art. That starts the story rolling, but what he really loves about her is the way she fights for what she wants in a very different way than he’s used to seeing. As for her, well, he’s different than any man she’s ever met. Patient, kind, and with a view of the world that expands her thoughts. This book is a meeting of minds that expands them both as they discover their bodies as well.

Regency Scotland! Lord Scot comes out later this month, and I’m starting to toy with its sequel Lady Scot.

Giveaway: Enter to win a signed copy of Into the Lyon’s Den, a connected Lyon’s Den book , or an eBook copy, if the winner prefers. Plus, receive a $20 Amazon gift card to pick up a copy of Lyon Hearted, or any other titles that strike the winner’s fancy!

To enter Giveaway: Please complete the Rafflecopter form and Post a comment to this Q: I wanted to see more diverse characters like Li-Na in historical romances, so I started writing more of them! What do you want to see more of in your romance books?

Li-Na lives in a black and white world, painting her feelings onto canvas by day and counting money in the Lyon’s Den at night. She’s found safety in the dark ink and the heavy clack of her abacus, but is it really a life?

Lord Daniel can’t draw worth a damn, but he can sell what he finds. And what he finds is Li-Na, a woman of such sublime talent that he will go to extraordinary measures to capture her art. When she refuses to leave her safe cocoon, he conspires with Mrs. Dove-Lyons to bring her to Cornwall where she will have everything she needs to paint. And if her art requires a more personal connection, then he willingly offers up himself as inspiration.

Li-Na will not give up her soul to this powerful man, no matter how many castles he owns. She paints him as a tiger hunting in the jungle. She feels him watching her, protecting her, and tempting her until her canvas is filled with his eyes, his mouth, and his caress. But she cannot surrender the only part of her still alive. Unless being consumed by him is the only way to bring color back to her heart.
Book Links: Amazon | B&N | iTunes | kobo | Google |

A USA Today Bestseller, Jade Lee has been scripting love stories since she first picked up a set of paper dolls. Ball gowns and rakish lords caught her attention early (thank you Georgette Heyer), and her fascination with the Regency began. An author of more than 40 romance novels and winner of dozens of industry awards, her latest releases are the Lords of The Masquerade series, Lyon Hearted, and Lord Scot (Coming October29) .

And don’t forget Kathy Lyons! She’s Jade’s paranormal half. Check out her new shifter series Were-Geeks Save the World.