Today it is my pleasure to Welcome author Kelly Hunter to HJ!

Hi Kelly and welcome to HJ! We’re so excited to chat with you about your new release, Matilda Next Door! 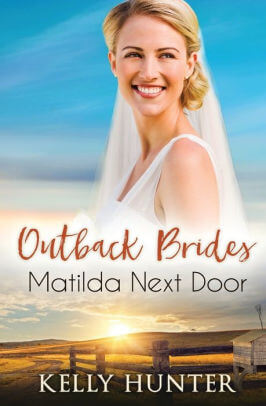 Matilda Moore is farm born and bred, and she’s known Henry Church since childhood when he came to live on his grandparents farm next door. So it’s a boy/girl next door kind of deal, except they’re all grown up now and Tilly’s house-sitting for Henry in London while he’s back in Wirralong visiting his grandparents. And just as Tilly’s getting a little too comfortable with Henry’s sock drawer, a motherless baby turns up on his doorstep, and turns lives and plans upside down.

I love first-meets, but if the characters have known each other forever, I have to make do with a first catchup in a while. This is Henry back in Wirralong and meeting up with Tilly a few days before she heads to London.

‘Henry!’ A quick lean forward so she could press her lips lightly to his cheek was probably enough.
‘Matilda.’
His voice held a world of reserve, so she stepped back with a roll of her eyes. Henry never had done casual affection, and apparently that hadn’t changed. ‘I’m guessing a hug is out of the question?’
‘We haven’t seen each other in four years.’
‘Yes, but it’s not as if we don’t know each other. We’ve cavorted together naked. I have pictures to prove it.’
‘I was four.’

Place. I write into this small-town Australian farming community alongside four other Aussie authors, and we’ve spent many books exploring the people and the land, the community and the connections. It’s never a hardship to revisit this story world. I love it.

Story focus wise, I wanted to explore how easy it was to have a generous and open heart when supported by a loving family (Tilly), and contrast that with someone (like Henry) who hadn’t been raised with a lot of love. Expressing love comes so easily to Matilda. Not so for Henry. Even if he loves deeply and completely, what if he has no idea how to show it? It’s a gorgeous dynamic to explore.

A few lines from the Robert Frost poem Stopping by the Woods on a Snowy Evening also kept me company when writing this one. Inspiring words scribbled on a post-it note next to the computer.

I got to know Tilly by exploring her reaction to London—her first trip abroad. She’s there by herself and is daunted by the size and bustle of the city. Henry’s flat is her refuge. Even though she wants to be an intrepid adventurer she has to steel herself to set forth and explore. She’s a hometown girl at heart.

Henry was harder to know, but I wrote a scene with him and his grandfather and thought gotcha.

That scene with Henry and his grandfather:

His grandfather waited until they were back at the car and Henry had settled the baby in the car carrier, before laying in. ‘So, you and Matilda Moore are engaged now. Since when?’
‘Last night.’ He still needed to get her a ring. Something flawless. Not too ostentatious. Had to be a diamond. He hoped she liked platinum. ‘It works for us. Why question it?’
‘Son, you question everything. It’s what you do. And now I’m questioning you. I thought you weren’t going to take advantage of Matilda.’
‘I’m not taking advantage of her,’ he grated. ‘Why are you automatically discounting the thought that I have feelings for her?’
His grandfather clamped his lips shut and stayed stubbornly silent, and it was this … this silence … that cut at Henry like the sharpest of knives. He never knew what the other man meant. Was he agreeing with his wife when she said Henry would never make good? Silence is consent? Was he too disappointed in Henry’s behaviour for words? What did all that silence ever mean?
‘Shall I answer for you?’ he offered, and then went right ahead. ‘Henry’s intellectual pursuits are all consuming—he doesn’t have time to understand people. Henry doesn’t trust women. Henry doesn’t know how to love. God help whoever marries him, because they’ll have their work cut out for them. Have I missed any?’
‘Son—’
‘I’m not your son. I’m no one’s son, and that’s another black mark, isn’t it? I had no notion of what father figures did at all, until you came along. But for all your encouragement when no one else was looking, I never quite won you over. You never stood up for me, not once. You let your wife spew her anger all over me, and never once raised your voice in my defence. You let me think I was too broken to fix. Best keep me away from anything of value, because I’ll destroy it, right? Poor Tilly. Doesn’t know what she’s taking on.’
‘I didn’t say that.’
‘Well, you sure as shit didn’t say congratulations.’

The scenes where Henry questions why the baby’s mother never told him about the baby were hard to get right. I fiddled with them a lot, thinking about Henry’s anger at being kept in the dark and whether he would forgive the now dead Amanda for her subterfuge. Lots to think about and work through. For Tilly too. She wades in with her thoughts at times.

‘This morning was hard.’ Tilly gave them both that much. ‘For me, it hit home that Rowan will never know her birth mother, and that’s something to mourn. By your account, Amanda was a worthy colleague and someone you thought enough of to go to bed with. She was smart. She tried to solve her own problems. Cancer beat her. Cancer beats a lot of people in the end. I think she tried to anticipate your wishes, by not foisting the unintended consequences of your night together off on you. And you might think less of her for that, and I see your point of view, but she doesn’t get a do-over. Amanda will never see her baby grow to be an amazing young woman. She’ll never get to see you be the wonderful dad she thought you could be. You didn’t put one rock on the cairn I made for her this morning.’

No departure here. It’s right in my wheelhouse.

That learning to love can be the most rewarding journey of all.

Giveaway: An ebook copy of Matilda Next Door & 3 Tule ebooks of your choice

To enter Giveaway: Please complete the Rafflecopter form and Post a comment to this Q: An easy question or two: Are you a homebody or an intrepid explorer? And if you’re away from home what’s the one thing you miss the most?

Excerpt from Matilda Next Door:

When a long-anticipated holiday takes an unexpected turn…

Aussie farm girl Matilda Moore kicks off her dream trip to London by flat-sitting for her childhood friend. But London is daunting, crowded and noisy, and that’s before Tilly finds a baby on the doorstep. There’s a note attached: “Henry, if you’re reading this, please know the worst has happened.”

Probability expert Henry Church has finally returned home to Wirralong, Australia, to see his grandparents when he gets a phone call from Tilly that breaks every statistical analysis. The probability of him being the father is marginal. Plus, he knows nothing about caring for a baby. Emotions and socializing are even bigger mysteries. He begs Tilly for help—can she cut her holiday short and bring the baby to Wirralong?

Tilly will do almost anything for her childhood best friend, but falling in love with him and his motherless baby is an emphatic no. Out of the question. Or is it?

Accidentally educated in the sciences, Kelly Hunter didn’t think to start writing romances until she was surrounded by the jungles of Malaysia for a year and didn’t have anything to read. Eventually she decided that writing romance suited her far better than throwing sterile screw-worm flies out of airplane windows, and changed careers. Kelly now lives in Australia, surrounded by lush farmland and family, 2 dogs, 3 miniature cows, a miniature pig, a 3-legged cat and a small flock of curious chickens. There are still flies, but their maggots don’t feed on flesh. Bargain. Kelly is a USA Today bestselling author, a three-time Romance Writers of America RITA finalist and loves writing to the short contemporary romance form.
Website | Facebook | Twitter | Instagram | GoodReads |

18 Responses to “Spotlight & Giveaway: Matilda Next Door by Kelly Hunter”