Today it is my pleasure to Welcome romance author Laura Brown to HJ!

Hi Laura and welcome to HJ! We’re so excited to chat with you about your new release, Matzah Ball Surprise!

Hi! I’m so excited to be here! 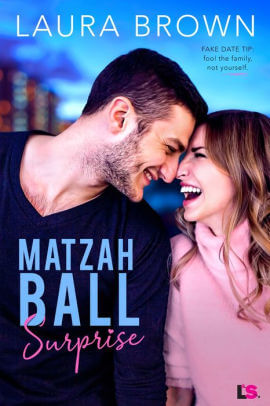 Gaby needs a fake date for Passover, and the hot guy at her gym looks like the perfect person to get her meddling family off her back. Only he’s Deaf, she doesn’t know ASL, and they may be fooling themselves more than her family.

Of all the places in the world to discuss impending doom, the gym would not have been Gaby Fineberg’s first choice. A bar would have been her first choice. And yet, there she sweated—in both the external and internal ways.

“It’s bad enough Tom ended the relationship,” Gaby said through panting breaths. “But Mom blaming me is the icing on the cake—as if the whole split was my grand idea.”

Hero: Levi is at first intrigued by this hearing woman who keeps talking to him. There’s a physical attraction there, but the way she blushes as she tries to communicate has him roped in.
Heroine: Gaby has been watching Levi at the gym for months. Not a huge fan of exercising, she drools over this guy using weights with controlled efficiency. He’s a perfect option when she needs a fake date!

Falling for the fake date.

Since this is a fake date situation, my hero comes up with a plan: he’ll squeeze Gaby’s arm twice if he thinks it’s needed for their ploy. When the time comes, she’s more than ready to give those lips a test run!

My favorite scene is after Levi gets hurt and Gaby does her best to take care of him, even though the sight of blood makes her gag! (Note that the speaking in this scene is ASL, not spoken English.)

She steeled herself and turned to a very amused Levi standing there, crossed arms, and—oh God—a large red stain on his bicep. She swayed a little, and the grin wiped clean off his face. He reached an arm out to her, the bad one, and the blood spot came closer. She really didn’t want
to find out how it felt to have heavy Passover food come back up. She inched back, leaning on the vanity counter, and gestured to his shirt. “O-D-D.”

His eyebrows lowered, and she went over the alphabet in her head, namely her frequent mistakes.

His lips curved again, completely unfazed by the fact he was injured and bleeding and freaking her out, seeming more amused by her demand for him to strip.

Goodness, she had demanded he strip.

Since my characters don’t share a language, setting up how they communicate would be crucial, and a lot of fun, in a movie!

He read the paper, then put it down on the table before shifting to face her. His knee bent toward the back of the couch, and she had the urge to crawl into his lap. But all urges stopped when he picked up her hand, his touch going straight to her head. He formed her hand into a fist, then held his up the same way.

Gaby scrunched her face. What the hell was he doing?

He picked up the paper and wrote one letter: A, then pointed to her hand and his, which was back in the shape.

He tapped his nose then took her hand again, rearranging her fingers to be straight, with her thumb across her palm.

He was teaching her the alphabet. And since each touch of his hand to hers made her all tingly, she had to concentrate extra hard. This would work, if she could pay attention.

Because it’s a lot of fun! I think I’ve used that word a lot in this spotlight, but this is my first romcom and I’ve had a blast writing it. I love being able to write characters that share my marginalizations, why my hero is Deaf (I’m Hard of Hearing) and both are Jewish. We need more diverse stories and I love putting those parts of myself in a novel where it doesn’t overshadow the central plot: a romance with a lot of laughs.

Right now I’m working on a cruise fling romance that’s publishing next year, another romcom! I have a second book in the series to Matzah Ball Surprise coming later this year, featuring Gaby’s sister. And I also have plans to continue working on a series of mine revolving around social workers.

A funny expression crossed her face, but he didn’t have time to decode her, not yet. He dropped his phone to his lap and slowly performed the sign for turkey.

Gaby’s face scrunched up, as if he signed something more complex than a single hand-shape—G—doing a single movement—wiggling under the chin—but then realization dawned, and she copied him, still using the wrong hand-shape—H. He shook his head and took her hand, ignoring how smooth her skin felt, and reformed her fingers, before lightly moving her arm to the motion, careful to do so high enough he wouldn’t accidentally brush her chest. Not that he’d ever had that issue before, but her body was like a beacon tempting him forward.

She nodded, and he let go and leaned back, needing space and air. She did the sign again on her own, correctly this time. All in all, she moved smoothly…too smooth for someone who had only started learning ASL a few days ago.

He tried to think of words he’d need over the next few days and jumped in with the first that came to mind. He didn’t have enough groundwork to really show her the words, so he settled for fingerspelling and then showing.

“W. A. N. T. Want.” He signed each letter slowly, waiting on comprehension to show on her face before moving to the actual word—hands outstretched, palms up, then fingers curling, arms moving close to the body, and then he realized his error.

He wanted her. That’s why he chose this sign. Not for wanting food, or privacy, or space, or to leave early. No, a very different kind of want.

If Gaby was onto him, she didn’t show it, her face open and ready. And that open face, giving him her full attention, copying his motions, signing want, had his dick stirring in his pants. She probably wanted a bathroom break, or to get the hell back on the road. Not to feel his hands on her body the way he wanted to feel hers.

He switched to dinner, kicking himself when the D handshape tapping the side of the mouth only drew his attention to her lips, making him wonder how they would taste pressed against his own. He quickly switched to table, pushing forward to keep his mind off things he shouldn’t be thinking of, and she even supplied some words herself, growing her vocabulary. She was eager, that much was clear, asking more and more questions, and if it were anyone else, he would’ve cut them off because they wouldn’t remember so much. But Gaby just might.

Still, he needed to cut this short before the sun shifted further in the sky and the light angled more on her face, bringing out those smooth cheeks. He pointed to the building, signing want, to see if she needed anything.

She nodded, her cheeks turning pink, and he realized another sign he forgot to teach her. He shaped his hand into a T, then shook it lightly side to side. “T. O. I. L. E. T.” The word was a little outdated, but it explained the T handshape.

She nodded again, cheeks now red, and scurried out of the car. He laughed as she walked away, the space between them allowing him to breathe a little easier. She was open and honest and eager to learn, but also shy and reserved at times. She would be a bit of a challenge to decode—one he wanted more than anything.

This Passover is starting to feel like the ten plagues might be coming back to haunt them before the weekend is over…one hilarious misstep after the next.

Gaby Fineberg just wants to get through Passover Seder without her “well meaning” family playing matchmaker. She needs a date, just for one simple meal—that includes singing, the history of her forefathers, and not one bit of yeast. The hot guy at her gym would be perfect. He probably hates bread, anyway, with a body like that. But when she finally works up the nerve to ask him…he doesn’t hear a word she said.

Levi Miller is deaf and happily single. Initially, he doesn’t know why this beautiful woman is talking to him, but it’s clear she needs help—and suddenly so does he. In a very complicated situation, Levi finds a simple solution. Gaby will pretend to be his new girlfriend to bail him out, and he’ll return the favor. But he didn’t bargain for a family dinner quite like this one…
Book Links: Amazon | B&N | iTunes | Goodreads |

After spending her childhood coming up with new episodes to her favorite sitcoms instead of sleeping, Laura Brown decided to try her hand at writing and never looked back. A hopeless romantic, she married her high school sweetheart. They live in Massachusetts with their two cats and son. Laura’s been hard of hearing her entire life but didn’t start learning ASL until college, when her disability morphed from an inconvenience to a positive part of her identity. At home the closed captioning is always on, lights flash with the doorbell, and hearing aids are sometimes optional.
Website | Facebook | Twitter | | Instagram |