Hi Kaylie and welcome to HJ! We’re so excited to chat with you about your new release, Montana Christmas Magic! 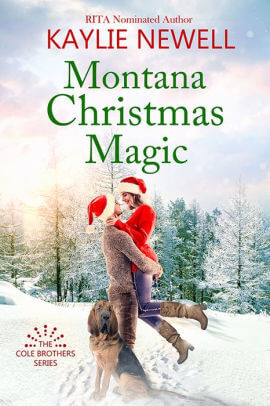 Montana Christmas Magic is about learning to open your heart and rediscover the magic of the holiday season. Griffin Cole, our hero, is the son of an aging rock star who had a huge Christmas hit in the nineties. He moves to Montana to get away from the spotlight, and to have as normal a life as possible. Trusting doesn’t come easily for him, as he spent his entire childhood watching people take advantage of his famous dad.

Our heroine, Raelyssa Woods, is Griffin’s polar opposite. She loves people. And she loves Christmas, something that Griffin could do without. But when Rae takes in a homeless dog named Noel, and her grumpy landlord threatens to toss her out, she asks Griffin for a favor- keep Noel long enough to find her a new family. As Rae and Griffin spend more time together, their love for Noel will eventually turn to love for each other. But trusting the magic between them won’t be easy.

One of my readers liked this line: (Griffin and Rae are having a cup of hot chocolate on their way to the dog park.) “It smelled heavenly- like a candy cane and a chocolate bar had fallen for each other, and had a love child.”

At its heart, this is an opposites attract romance. Rae and Griffin are so different, and for me, that’s always fun. Writing their story was only part of the creative process, though. I usually spend most of my time with my characters throughout the day- walking the dog, or taking a shower, etc. They talk to me (I promise this is normal for writers!) and that’s how I get to know them best. Griffin turned out to be much more of a softie than I was expecting. I liked that.

I’d say my favorite scene was where Griffin and Rae kissed for the first time underneath some mistletoe at Copper Mountain Chocolate Shop. Here’s a peek…

“Nice to see you, Carol,” he said over his shoulder.
“Wait, kids!” she called. “Wait just a second!”
Griffin had opened the door, and Rae was just getting ready to step through. They looked at each other, and then slowly turned to Carol again.
The other woman was smiling wide, her eyes sparkling. She pointed above their heads. “Mistletoe!”
Rae looked up, her mouth hanging open.
Carol Bingly! The woman was insufferable.
Griffin shifted on his feet. “Uh…”
“Well, go on,” Carol said. “You can kiss him, Raelyssa. It’s just like that song…” She snapped her fingers. “‘Mistletoe Magic’?”
Rae put her hands on her hips and pulled in a breath. “I…”
“Oh, come on,” Carol said. “It’s tradition.”
Griffin watched her, his face a blank canvas. “It is just like the damn song,” he said under his breath. “And you said you wanted to reintroduce me to the magic. So to speak…”
She stared up at him. He was supposed to be on her side.
“Besides,” he whispered. “I don’t think she’s going to give up anytime soon.”
Rae looked over at Carol who was waiting patiently, her arms crossed over her bosom.
“Oh, good grief.” She stomped her foot. Then sighed and stood on her tiptoes to give him a peck on the mouth.
Her knit cap slid to the side, and she jammed it down on her head again. She shot Carol a look, but the other woman seemed oblivious. And absolutely delighted.
“Now, was that so hard?” Carol asked. “I just love mistletoe, don’t you?”
Rae’s lips were still tingling. Griffin was staring down at her, his mouth tilted slightly. She felt like she’d opened Pandora’s Box. How in the world was she going to unkiss him, now? The answer to that, of course, was that she couldn’t. It was too late. Now she knew what he smelled like up close. How his lips felt against hers.
This was going to make it extra hard, if not impossible, not to get her heart broken. They weren’t a good fit. They weren’t even a decent fit; he’d just said it himself. Fundamentally different, that’s exactly what he’d said. And then she’d be getting a big, fat I told you so from Ellie and Gus. It was a given.
Griffin reached out and pulled the door open again. The little bell above it tinkled merrily. Carol waved from across the shop. Noel wiggled when she saw them, her tail slapping the light pole. But the only thing Rae was truly paying attention to was the warning that kept running across her brain.
You’ve really done it this time…

It’s always hard to write the dark moment. Griffin tries so hard not to fall for Rae. This scene is where he’s pushing her away the most…

“I care about you, Griffin. I’d never want to hurt you.”
Too late. He thought of his mother then, and how she’d cared too. She’d been conflicted too. And she’d ended up leaving. It was a free damn country. People could leave if they wanted to. But he sure as hell didn’t have to be the one being left. And wouldn’t be, if he could help it.
“Look, Rae. We’ve been having fun. It wasn’t anything serious. It’s okay, really.”
He’d deliberately used past tense. And she noticed.
She looked down at her hands. There was a part of him that wanted to get up and go to her. To pull her into his arms and brush her hair back to kiss her temple. But it was the other part that wouldn’t allow it. Somewhere along the way he’d grown so callous, he didn’t recognize himself anymore.
“I just thought…” She looked up again and her eyes were bright. “I just thought it was a little more than having fun.”
He didn’t trust himself to say anything. Because what he wanted to say was that he wished he could go back and ask her to a movie. Or to dinner, so she’d known for a fact how he felt about her. He wished he’d done it in the beginning, so that he would’ve given himself time to warm to this. To grow with it. But instead, it had knocked him to his knees.

I’m leaning into sweet romances more and more. They’re definitely a departure from my earlier books, which are steamy. I’m really enjoying digging into the emotional part of the story and trying to make the setting come alive, which I feel is one of the things I do best. I want my readers to feel like they’re inside a Hallmark movie when they read one of my stories!

I’d love it if people read this book and got excited for the holidays. Day made.

Montana Christmas Magic is the first book in my Cole Brothers series. I just turned in the second book today — Montana Rancher’s Kiss. That will be out early next year!

Giveaway: An ebook copy of Montana Christmas Magic & 3 Tule ebooks of your choice

To enter Giveaway: Please complete the Rafflecopter form and Post a comment to this Q: If you could spend your holidays anywhere, where would you go?

All accountant Griffin Cole wants for Christmas is stability. After spending his childhood traveling the world with his one-hit wonder rocker dad, he loves his quiet and unremarkable life in Marietta. Then the beautiful Raelyssa Woods knocks on his door. Her bold spirit immediately turns his predictable life upside down, and suddenly Griffin wants to ask Santa for so much more.

Rae Woods loves running her café in the small Montana town she calls home. She specializes in comfort food because she loves spreading joy to everyone she meets—two-footed or four. But after she impulsively takes in a homeless dog she names Noel, her big heart lands her in bigger trouble when her landlord threatens to toss her out. Grasping at holiday straws, she remembers a cute accountant who owes her a favor—and she happens to know he’s got a fenced yard and hidden soft spot.

When Griffin reluctantly agrees to foster Noel, he inadvertently sets in motion several Christmas miracles that neither he nor Rae could have ever seen coming.

For Kaylie Newell, storytelling is in the blood. Growing up the daughter of two writers, she knew eventually she’d want to follow in their footsteps. She’s now the proud author of over a dozen books, including the RITA® finalists, Christmas at The Graff and Tanner’s Promise.