Today, HJ is pleased to share with you Julie Moffett’s new release: No Questions Asked

One last fling (with danger) before the ring? Nothing’s that simple when you’re a geek girl. Julie Moffett’s beloved Lexi Carmichael mystery series returns with No Questions Asked. 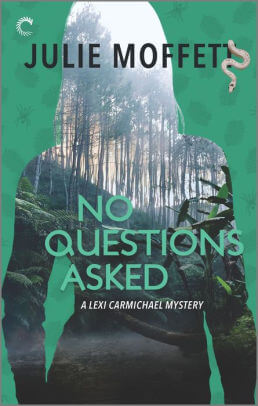 Lexi Carmichael: saving scientists one snake at a time.

Weddings aren’t my thing—never have been. But eloping would break my mother’s heart, especially since the president of the United States put in a good word for me with his daughter’s wedding planner. I’m going to have the wedding of the year…whether I like it or not.

Before we can say I do, Slash and I are flying off to the Brazilian rain forest. Our mission: stop hackers from stealing a vaccine that could save millions of lives. I thought it’d be easy, but from the moment we step off the plane, I’m up to my neck in trouble.

After an attack by drug-runners, being kidnapped and discovering that the bad guy is even worse than we’d imagined, I’m pretty sure someone in our group is working for the enemy. And they’re succeeding. I’ll have to use all my geek skills to stop the bad guys if I’m going to make it home in time to tie that knot.

And don’t miss the rest of Julie Moffett’s Lexi Carmichael Mysteries, available now from Carina Press: No Stone Unturned, No One Lives Twice, No One to Trust, No Money Down, No Place Like Rome, No Biz Like Showbiz, No Test for the Wicked, No Woman Left Behind, No Room for Error, No Strings Attached, No Living Soul and No Regrets.

Enjoy an exclusive excerpt from No Questions Asked

Excerpt. ©Julie Moffett. Posted by arrangement with the publisher. All rights reserved.

Giveaway: One (1) ebook copy of NO QUESTIONS ASKED by Julie Moffett (open internationally)

Julie is a military brat (Air Force) and has traveled extensively. Her more exciting exploits include attending high school in Okinawa, Japan; backpacking around Europe and Scandinavia for several months; a year-long college graduate study in Warsaw, Poland; and a wonderful trip to Scotland and Ireland where she fell in love with castles, kilts and brogues.

Julie has a B.A. in Political Science and Russian Language from Colorado College, a M.A. in International Affairs from The George Washington University in Washington, D.C. and an M.Ed from Liberty University. She has worked as a proposal writer, journalist, teacher, librarian and researcher. Julie speaks Russian and Polish and has two sons.

18 Responses to “Spotlight & Giveaway: No Questions Asked by Julie Moffett”