Hi Annie and welcome to HJ! We’re so excited to chat with you about your new release, Pregnant with His Majesty’s Heir!

Hellooo! It’s brilliant to be here again, and talking about a new book. What would be more fun?

Here’s the summary I sent to my editor as I was writing: 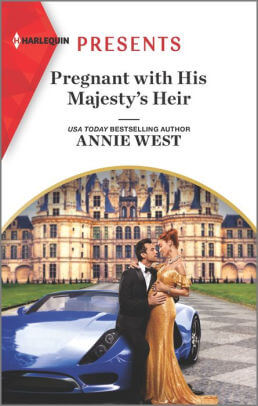 His Majesty’s Pregnant Cinderella! Two lost souls find solace together but their passionate night has consequences. Now newly crowned King Lucien, on the verge of a royal marriage, discovers the stranger he can’t forget carries his heir. They’ve sparked a worldwide scandal. Can they find love in the spotlight’s glare?
Think passion, high-stakes emotion and two people who face down their doubts and fears to do the best for their unborn child, in the face of public speculation and considerable pressure. I loved this pair. The attraction between them was instant and all-consuming but their paths lay in different directions. By the time they meet again, with a pregnancy between them, it seems the odds of them finding a happy ever after is slim. But they don’t give up. I loved that!

I had a fair idea who they were before I began writing, but, as ever, I only really got to know them fully as they appeared on the pages, reacting to each other and the circumstances they found themselves in. I discovered Aurélie was an intriguing mix of vulnerability and feistiness while Lucien battled the to combine duty and his own desires. I liked that each had their own weaknesses and strengths and gradually learned how to deal with them.

One that made me grin was when Aurélie discovers the wild stories the press is printing about her and Lucien and decides that, instead of hiding out of sight, she’ll brave the paparazzi and go out by herself. Lucien finds out and comes to meet her, then takes her to meet his formidable great aunt, the sort who can quell anyone with an icy stare. Aurélie needs all her courage and faces a few surprises, but I think it’s a really heartwarming scene. I won’t share it here as I don’t want to give too many spoilers, but I hope if you read the story you’ll enjoy it as much as I did.

Surprisingly it was probably the opening, which was also one of my favourites. I had to show an instant, consuming attraction between a couple who usually don’t act on the spur of the moment and who are both battling their own demons. I feared I might not get the balance right but feedback from readers seems to be that it works for them. Whew! I’m relieved. I loved it, but I want others to as well.

Here’s a snippet:
‘What are you doing?’ Aurélie was on her feet.
He didn’t look at her. He wore that closed expression she’d seen in the restaurant and out on the street.
‘Thanks for your hospitality, Aurélie. I appreciate it. Now it’s time I left.’
‘You can’t go.’ Her voice rose. ‘It’s not safe to drive and you haven’t got a place to stay.’ Why hadn’t she made that a priority?
He shrugged and reached for his pullover. ‘I’ll sleep in the car. I have to leave now.’
Aurélie stood in front of him, forcing him to look at her. When he did, the impact of that glittering stare almost rocked her back on her feet. Yet it was nothing to the urgent emotions within.
‘Why?’
He paused, hands fisting in the dark wool, his bare chest rising sharply on a ragged breath.
‘Because I want you, Aurélie.’
He dragged in another breath that sawed loud in the silence while his words demolished something inside her.
‘I’ve wanted you from the first moment you smiled and led me to my table. I watched you walk in front of me, your scent fresh as spring, the sway of your hips, the perfect curves of your backside…even the damned swing of your ponytail beckoned me.’ His voice ground low, hitting a husky note that dragged through her like fingers raking velvet.

This book is smack, bang in the middle of Annie West territory. It features strong yet vulnerable characters. Star-crossed lovers who seemingly have the fates against them getting together. There’s a Cinderella element in the book and my poor heroine battles as a fish out of water, trying to cope in a world very different to her own. But she doesn’t let that deter her. She rises to the occasion, as does her hero, who, after letting duty rule his life, decides he’ll do whatever it takes for the woman he loves. It’s passionate, very, very emotional and sexy, all things I think characterise my books. The setting is rich too, perfect escape territory to a wonderful kingdom nestled in the European Alps.

As ever, a big, satisfied smile. I’d love to think readers will remember this story, this couple, and the world of their story and that they bring joy even after after the book is finished.

My next release (Aug/Sept) is ‘A Consequence Made in Greece’ which has a definite touch of enemies to lovers and includes a scandalous proposal. My heroine is determined to take the arrogant (but adorable) hero down a peg or two and she succeeds, but with unexpected consequences.
After that is a bodyguard story set in Australia that I’ve been having lots of fun with.
To keep up to date with my books, feel free to sign up to my newsletter via my website at annie-west.com so you don’t miss a story, or a giveaway. I don’t spam and I don’t share email addresses.

To enter Giveaway: Please complete the Rafflecopter form and Post a comment to this Q: I have several places where I love to relax and read, and it depends on the time of day and the weather. What’s your favourite place for reading?

Excerpt from Pregnant with His Majesty’s Heir:

Poor Lucien doesn’t seem friendly in this snippet, but he’s in the middle of rehearsing his wedding (to a woman he doesn’t love but is expected to marry), when the woman he’s been pining for arrives out of the blue! To say he’s thrown is an understatment:

The father of her baby…

Is none other than the king!

After the death of his beloved uncle and cousin, reluctant royal Lucien is seeking escape. Which he finds with an irresistible waitress who stokes an uncontrollable fire within him…

Her one reckless night with an unforgettable stranger leaves Aurelie a mother-to-be. She’s scandalized to discover her baby’s father is the brand-new king of Vallort! And as much as ordinary Aurelie can barely imagine her place in this opulent kingdom, she has no choice. She must confess all to Lucien and await His Majesty’s reaction…

USA Today Bestselling author Annie West loves writing passionate, intense love stories. She has devoted her life to an in depth study of tall, dark, charismatic heroes who cause the best kind of trouble in the lives of their heroines. Creating heroines who are a perfect match for those strong, stubborn men is one of her all time favorite things. As a sideline she’s also researched dreamy locations for romance, from vibrant cities to desert encampments and fairytale castles. She lives on the east coast of Australia and her favorite things are books, good company, good food and travel.
Website | Facebook | Twitter | Instagram | GoodReads |

29 Responses to “Spotlight & Giveaway: Pregnant with His Majesty’s Heir by Annie West”