A delightfully refreshing take on contemporary romance, narrated by the distinctive, quirky voice of a lovable pug named Doug, who becomes a cupid of sorts when he decides to fix his owner’s love life with his own four paws. 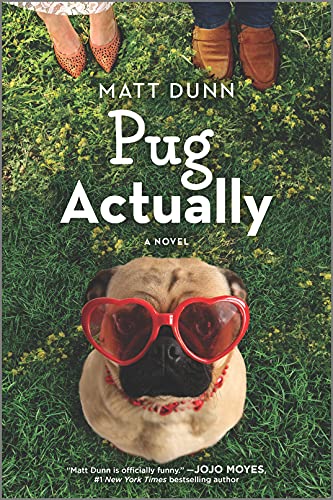 Not all heroes wear capes, some of them wear collars.

Rescue dog Doug, a pug, wants his owner, Julie, to be happy. He loves her unconditionally, and he’s loyal – two things that can’t be said about Julie’s boss, Luke. Luke and Julie are sleeping together. But Luke is married. And despite repeated promises he’ll leave his wife soon, Doug’s certain he’s just stringing Julie along. But Julie refuses to break off the affair, worried that this is as good as it will get, and she might end up like her crazy, cat-owning neighbor. It’s a prospect that horrifies Doug as much as her being with Luke does.

Newly-divorced Tom, on the other hand, is perfect for her and everyone around them can see it – except for Tom and Julie. Perhaps, with Doug’s help, they can get over their initial animosity towards each other.

Doug struggles to understand, navigate, and influence the quirks of human relationships, but he knows he can’t give up on Julie – after all, being a “rescue” dog works both ways…

“Was that Luke I just saw driving away?”
Julie’s other best friend Priya has just arrived. This is good because a) she’s brought wine and snacks (though I’m not a fan of the former given how much of it Julie drinks on an all-too-regular basis, the more of it she consumes, the more of the latter I get), and b) given the amount of wine Priya’s brought, and the fact that she’s just seen Luke leave, she and Julie are inevitably going to have a pretty heavy conversation about Luke at some point this evening. And maybe—just maybe—this time, some of it might sink in.
“Might have been,” says Julie, then she hurries off to fetch a couple of glasses from the kitchen, to avoid further ques¬tioning. Ever since Luke became a feature in our lives, Priya’s been pretty vocal in her disapproval, mainly of Julie’s ongoing belief that Luke will eventually leave his wife for her.
“Right. Only he didn’t seem that happy.”
Julie seems to be considering trying to explain what hap¬pened, then evidently thinks better of it. “Probably because he was going home to her.”
“Oh Jules, I’m sorry.”
“What are you sorry for? We haven’t split up, or anything.”
“That’s what I’m sorry about!” Priya lets out a slightly over-the-top laugh, then, with a super-friendly “Hey, Doug!” she kneels down to scratch the wrinkles on the top of my head, following it up with an impressed-sounding “Big stretch!” when I perform my usual warm-up move. “And?”
“And nothing. He was just passing by. Called in for a quick…”
Priya holds a hand up as if she’s going for a high five. “If you’re about to add an i and an e to the end of that last word, then that’s way too much information!” she says.
“Visit, I was going to say.”
“Right.” Priya gives me a final pet, then hauls herself back to her feet. “Not had an argument, have you?”
“Just a difference of opinion. That’s all.”
“Do I want to know?”
“Don’t you always?”
“Sorry, Jules. I just don’t want to see you get hurt. And I’m afraid Luke is never going to leave his…”
“P!” It’s Julie’s turn to do the high-five thing. “I don’t want to hear it.”
Priya gives me a look as if she and I are in on a secret, then she nods at the wineglasses, so Julie pours them both a drink, then empties a packet of Kettle Chips into a large bowl, which she sets down on the sofa between them. I take up my usual position on the rug in front of the sofa and stare expectantly up at the bowl. Julie picks up the TV remote, stabs at a cou¬ple of buttons, unmutes the volume, and the familiar Game of Thrones theme tune blasts out into the room.
“Winter is coming,” she says, in a funny voice, and Priya frowns.
“We still talking about you and Luke?” she says, and Julie does that openmouthed thing that’s supposed to indicate both disbelief and displeasure.
“Priya, just drop it, will you?”
“Okay, okay.” Priya takes a huge gulp from her wineglass. “It’s just…”
“He will leave her. He promised. He said it again tonight. He just has to get all his ducks in a row, and…”
“That’s ducks with a d instead of an f, right?”
Priya’s very quick-witted. She comes out with a lot of this kind of thing, and possibly despite herself, Julie smiles.
“P, please. Not all of us have it as easy as you and Sanj, you know?”
Sanj is Priya’s husband, and the point Julie’s making is that Priya didn’t have to lift (or even swipe right with) a finger to find Sanj. Their parents introduced them, and it’s why Julie quite often tells Priya she doesn’t have “a leg to stand on” when commenting on her and Luke. Although to her credit, Priya won’t be put off.
“Maybe so,” she says. “But just tell me this—how long are you going to give him?”
Julie helps herself to a chip, and while I hope I might be getting one too, she’s too preoccupied with Priya’s question to think of me.
“As long as it takes.”
“And what if it takes forever? You want a family, right? Kids?”
Julie chews thoughtfully. “Eventually,” she says, in the same way you might say “obviously,” and Priya leaves a dramatic pause before tapping the face of her watch.

Giveaway: Enter to win a finished copy of PUG ACTUALLY. Open to US/CA entrants only

To enter Giveaway: Please complete the Rafflecopter form and post a comment to this Q: What did you think of the
excerpt spotlighted here? Leave a comment with your thoughts on the book…

Matt Dunn is a UK author who has written thirteen previous novels, including Then I Met You and The Ex-Boyfriend’s Handbook, with over 400,000 copies sold in digital alone. He’s also written about life, love and relationships for various publications including The Times, The Guardian, Glamour, Cosmopolitan, Company, Elle and The Sun.
https://bookshop.org/books/pug-actually/9780778311232