Today, HJ is pleased to share with you Karen Rose’s new release: Quarter to Midnight

Discover New York Times and USA Today bestselling author Karen Rose’s brand-new series set in the sultry, crime-ridden city of New Orleans and featuring a tough team of high-end private investigators who are after justice—no matter what they have to do to get it.

There are good cops. And there are bad cops. The question is…who wins? 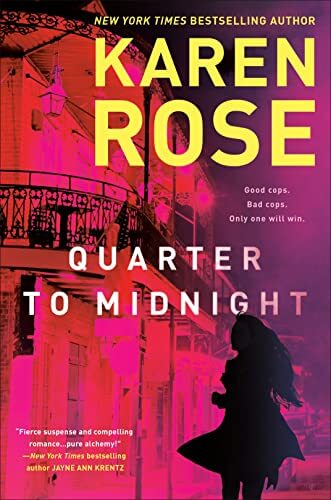 After completing her tours with the Marines in Iraq, Molly Sutton knew she could take down any bad guy she met. But when a family tragedy exposes the dark side of her local police, she joined up with her former CO Burke Broussard, who left New Orleans PD to set up a private investigative service for people who couldn’t find justice elsewhere.

Gabe Hebert saw the toll that working for the NOPD took on his dad and decided instead to make a name for himself as one of the best young chefs in the French Quarter. But when his father’s death is ruled a suicide after a deliberately botched investigation by his former captain, Gabe knows his dad stumbled onto a truth that someone wants silenced.

Gabe goes to his father’s best friend, Burke, for help. Burke assigns the toughest member of his team, Molly, to the case. Molly can’t believe she’s being asked to work with the smoking hot chef whose chocolate cake is not the only thing that makes her mouth water. Sparks fly as they follow the leads Gabe’s dad left them, unraveling a web of crimes, corruption, and murder that runs all the way to the top.

Enjoy an exclusive excerpt from Quarter to Midnight

Excerpt. ©Karen Rose. Posted by arrangement with the publisher. All rights reserved.

Giveaway: One copy of QUARTER TO MIDNIGHT for a U.S. only winner.

Karen Rose is the award-winning, #1 international bestselling author of twenty-five novels, including the bestselling Baltimore and Cincinnati series. She has been translated into twenty-three languages, and her books have placed on the New York Times, the Sunday Times (UK), and Germany’s der Spiegel bestseller lists.

26 Responses to “Spotlight & Giveaway: Quarter to Midnight by Karen Rose”