Hi Joanne and welcome to HJ! We’re so excited to chat with you about your new release, Rancher in Her Bed!

Thank you! I’m so glad to be back with a June release. It’s always fun to have a book out for beach reading! 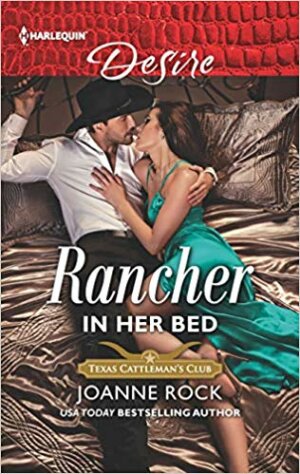 A fiery cowgirl tangles with her rancher boss, and sparks fly! This one is a Texas Cattleman’s Club story, and the character of a Cinderella cowgirl really appealed to me.

Frankie Walsh understood that her generation had killed romance.
Sure, some people said that dating apps were responsible. And it was true the swipe-left mentality definitely smothered every last hope of spontaneity and excitement. But whether the blame rested with millennials or apps or the parenting that had let a crop of kids grow up thinking they were the center of the universe, Frankie agreed with the consensus among her girlfriends that romance was a thing of the past.

The hero, Xander, has a dark past that haunts him. Unwrapping the layers of those hurts is always interesting from a writerly standpoint. The heroine’s past is darker than she realizes, and she gets a big surprise about her past that I can’t share without spoilers! But that was fun to develop. She is also trying to raise funds for veterinary school, which was a different goal for a character, but worked well with her love of animals and involvement on the ranch.

“Frankie.”
A man’s voice cut clean through her tumultuous thoughts. Her head snapped up to see her Xander Currin striding toward her.
Purposefully.
A thrill shot through her at the sight of him in his in dark jeans and a fitted black button down. His Stetson was the same one he usually wore, but his boots were an upgrade from the ones he wore for work. His blue eyes zeroed in on her face, stirring more butterflies.
“Yes?” Puzzled that he would seek her out, she listened hard to hear over her galloping heartbeat.
He didn’t look pleased. He couldn’t possibly still be mad about taking Carmen out the other day?
“I just saw Reggie.” Her boss stopped a few feet away from her, closer than he’d ever stood to her before. “He told me you’re entering the saddle bronc event.”
“That’s right.” Relief seeped through the awareness of him. He wasn’t here to give her a hard time about riding Carmen. “There’s a ladies’ competition tonight.”
“Do you have any idea how dangerous rough stock events can be?” His voice was all sharp edges and accusation, just like the last time they’d spoken.
Defensiveness flared. How was it she could irritate this man just by existing?
“I work with horses and cattle every day, the same as you do. I suppose I know a thing or two about them.” She folded her arms, refusing to let him intimidate her here. Off the Currin Ranch grounds.
She’d worked too hard in life to be steamrolled by people who thought they knew what was best for her.
“That doesn’t mean you’re ready to ride a surly, pissed off beast trained to buck.” His jaw clenched. “Do you know how hard riders prepare for this event?”
A burst of applause broke out at a nearby midway game while she reeled from Xander’s sexist audacity.
“Did you give Reggie the same speech you’re giving me?” She felt a flash of impatience that bordered on anger. “Or Wyatt, the greenest of your employees entering a competition tonight?”
Xander’s lips flattened into a thin line. “No. But–.”
“Then don’t you think you’re being chauvinist to call me out for doing an event that I have spent time preparing for and that I’m actually good at?”
His expression shifted slightly, some of the tension around his eyes easing a fraction. He seemed to force in a deep breath before responding.
“You have a reputation as a very hard worker around the ranch, but if you’ve been training for this, it’s the first I’ve heard,” he acknowledged, dialing back the confrontational tone.
Taking a bit of the wind from her sails along with it.
“Well, I don’t have much spare time to train given my schedule.” Some days she ached so much from the physical grind of the labor she did, she could barely force her arms to shovel food in her mouth before showering and heading to bed. “I take as many hours as I can to make ends meet.”
She lifted her chin, daring him to find fault in that. There was no shame in hard work.
The country band playing nearby launched into a crowd-pleasing favorite, eliciting whistles and shouts from the dancers on the other side of the Ferris Wheel. Neon lights blinked in varying shades as the spokes of the ride spun past them.
“I don’t want you in that arena tonight,” Xander informed her, blue eyes utterly serious.
She reminded herself she worked for him. That she didn’t want to land on the wrong side of the powerful Currin family. But damn it, who did he think he was to call the shots for her tonight?
“That’s too bad,” she found herself saying anyhow, “because I’m not on the clock now, which means you can’t order me around.”
Xander glanced away from her and then back again. More gently, he asked, “Can you tell me why it’s so important to you to enter an event so fundamentally dangerous?”
Something in his voice compelled her. So she decided to be honest.
“I’m working hard all the time trying to earn enough money to put myself through veterinarian school, and I don’t get many breaks.” She forced herself to unclasp her folded arms. To stand up straighter and own her thoughts and feelings. “And when I heard about the Texas Cattleman’s Club Flood Relief Gala, I thought that was the kind of break I’d love—something fun and different that would let me have a glimpse of the life I’m working toward. A chance to see the reward with my own eyes to keep me on the path. You know?”
Xander cocked his head like he didn’t quite understand.
“You want to go to the Flood Relief Gala,” he said slowly.
“I do. It’s healthy to give yourself some tangible rewards in the process of working toward a big goal,” she explained, sharing an insight gleaned from a college counselor who’d helped her figure out how to start on a path toward achieving her big dreams. “And the prize money tonight will give me enough to afford a ticket to the gala.”
The loudspeaker blared a call for the competitors in her event. Nerves fluttered in her stomach.
Because of the upcoming ride or the man?
“I’ve got to go.” She took a step forward, but he stepped in front of her.
“You can’t enter, Frankie. I mean it.”
How had she missed all the signs that her boss was this bull-headed? “You can’t fire me for being in the rodeo when you’ve got five other employees entering.”
Eyes on the arena, she didn’t want to lose her spot. She started forward again.
“Then, I’ll make you a deal,” Xander offered, his voice deep. “If you don’t set foot in that arena tonight, I’ll take you to the gala as my guest.”

Eagerness to read the next Texas Cattleman’s Club: Houston story! There is a lot going on in this continuity. But I’m always glad for readers to simply enjoy the time they’ve spent in a world I’ve worked hard to build. Ideally, reading Rancher in Her Bed gives you the feeling of taking a fun (and sexy!) trip to Houston.

I’m currently writing the fourth book in my upcoming Mesa Falls Ranch series for Harlequin Desire. Next up for me is GAME ON, the second of my Texas Playmakers baseball stories for Tule Publishing in August 2019. Then my Mesa Falls series begins with:
The Rebel, 11/19
The Rival 12/19
The Rule Breaker 2/20
The Heartbreaker 3/20 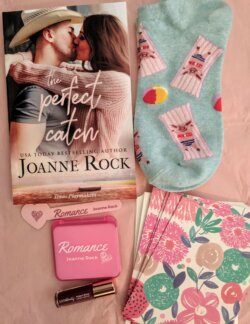 Giveaway: I’m giving away two prizes! For US readers only, I have a prize pack with The Perfect Catch, cute socks, notecards, lip gloss and book swag. For all readers, including INTL readers, there is a digital download of my May 2019 release, The Perfect Catch.

To enter Giveaway: Please complete the Rafflecopter form and Post a comment to this Q: Rancher In Her Bed has a pivotal scene under a small town Ferris Wheel! Which ride would you brave at your local county fair or rodeo?

Excerpt from Rancher in Her Bed:

“Just because we leave the party doesn’t mean the night has to end.”

Rancher Xander Currin won’t commit to anyone after tragedy broke his heart. But when his feisty ranch hand Frankie Walsh puts herself at risk to secure her future, his protective instincts kick in. He offers her a ticket to the rich and connected at the Texas Cattleman’s Club gala. But soon combustible desires consume them both…and someone’s going to get burned.

« Spotlight & Giveaway: The Two-Week Arrangement by Kendall Ryan
REVIEW: Texan for the Taking by Charlene Sands »

47 Responses to “Spotlight & Giveaway: Rancher in Her Bed by Joanne Rock”