Today, HJ is pleased to share with you Katie Ruggle’s new release: Risk It All 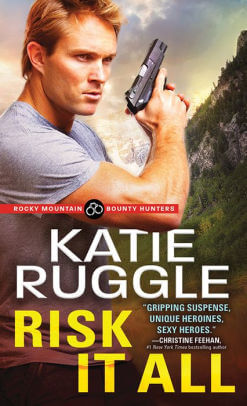 Cara Pax never wanted to be a bounty hunter. She’s happy to leave chasing criminals and tackling skips to her sisters. But if she wants her dreams of escaping the family business to come true, she’s got one last job to finish… Only problem is, she doesn’t think her bounty is guilty.

Henry Kavenski is a man with innocence to prove. When he realizes that Cara believes him, he’ll do anything to keep her out of harm’s way. Escaping criminals and dodging cops might not be the best time to fall in love, but Henry and Cara won’t give up, not when there’s a chance at a new life ahead—if they can survive the fall.

Enjoy an exclusive excerpt from Risk It All

Thank you for having me! This is one of my favorite bits of Risk It All, the second book in my Rocky Mountain Bounty Hunters series.

I love how Henry and Cara try to protect each other, despite being on opposite sides of the law. Enjoy!

Giveaway: A paperback copy of Risk It All (Rocky Mountain Bounty Hunters series) by Katie Ruggle

To enter Giveaway: Please complete the Rafflecopter form and post a comment to this Q: In Risk It All, Cara aspires to be a kindergarten teacher while working for her family’s bounty-hunting business. What would your ideal job be?..

When she’s not writing, Katie Ruggle rides horses, trains her three dogs, and travels to warm places to scuba dive. A police academy graduate, Katie readily admits she’s a forensics nerd. Connect with Katie at http://katieruggle.com/, https://www.facebook.com/katierugglebooks, or on Twitter and Instagram @KatieRuggle.

44 Responses to “Spotlight & Giveaway: Risk It All by Katie Ruggle”