Today it is my pleasure to Welcome author Shannon Stults to HJ!

Hi Shannon and welcome to HJ! We’re so excited to chat with you about your new release, Risking It All! 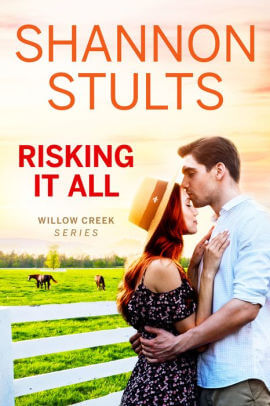 Darby has been living all over the country, settling in one place for only a few months at a time, for the last seven years. Now in serious debt she needs to pay off, she makes a quick stop in Willow Creek to try to borrow money from her cousin, Logan Kase, and ends up getting stuck there for the foreseeable future and working at the local horse ranch with Caleb Forester. Darby and Caleb are old friends from her summers spent in Willow Creek, but they haven’t spoken in years and things didn’t exactly end well the last time they were together. Darby makes it her goal to win him over and fix their friendship, much to his annoyance, while simultaneously trying to figure out how to pay off her immense debts and get out of the small town before she can get too comfortable.

Darby Watkins’s red curls ruffled in the wind of the open window as she drove down Main Street toward the center of town, her eyes drifting over the familiar line of historic homes and storefronts. She pulled her car into an empty spot just outside the small art gallery she’d visited occasionally during her annual summer stays with her aunt, uncle, and cousin as a kid.
Her stomach clenched as she surveyed the calm street, the nearly empty sidewalks, searching for any faces she might recognize or who might recognize her. But, truth be told, there was really only one face she was worried about.

This book went through so many titles. My working title was originally Heads or Tails, which became Finding Home once the book was done. Then when my publishers and I decided we didn’t love that one, it became Stealing Home, then Letting it Ride. We bounced around a million ideas before we all finally agreed on Risking It All.

Book research is one of my favorites, especially for this one. Getting ready for Risking It All, my sister and I went on a three-week road trip traveling from Georgia to California and back. It was so much fun, and we hit up so many great places.

Darby is one of those people who is always on the move, always answering that call of wanderlust. She also has a tendency to stick her foot in her mouth, so making friends has never been easy for her. Caleb is her opposite, always in control of what he says and does and is dead set on staying put in the only town that has felt like home since he entered the foster care system as a kid. He looks forward to the kind of love his adoptive parents had while he was growing up, and Darby views love as something temporary that will inevitably end in heartbreak. As kids, their friendship was so strong because they managed to balance each other out, but as they get older those differences become a hurdle they struggle to get over together.

There is a scene when they are teenagers, sitting together on the beach and watching the sunrise just after Caleb has gotten some difficult news. It’s a very emotional scene and a perfect example of just how connected they are to each other.

Darby turned and grinned up at him. “You know I love you?”
He smiled back. He did, even if it wasn’t quite the same way a part of him wished she meant it. “I know.”
“And I’ll always be here for you, no matter what. You say the word and I’ll come running.”
He nodded.
“Good. Now you hold on to this coin. There may still be some luck in it yet,” she said, pulling his grandpa’s silver coin from her front pocket and pressing it into his hand.

No matter what stage of life you’re in, don’t feel like you have to have everything mapped out ahead of you. You’re allowed to take your time, try different things until you find out what it is you want to do. And then you’re allowed to change your mind. You are not chained down by the choices you make when you’re practically still a child fresh out of high school or college. Just do what you want to do in life.

Risking It All is the last of the Willow Creek series for now. I’ve just started working on a new story about rival wedding planners, but it’s in the very beginning stages right now…along with about a million other projects and ideas I have.

Giveaway: An ebook copy of Risking It All and Tule swag (US only)

To enter Giveaway: Please complete the Rafflecopter form and Post a comment to this Q: If you had to pick one city in the world to move to and start fresh right now, where would you go and why?

Excerpt from Risking It All:

Darby Watkins hasn’t been back to Willow Creek in years, and with good reason. But when an accident causes damage at the local equestrian center, what’s meant to be a quick visit turns into an indefinite stay while she works to pay back the owner. And as if that weren’t bad enough, she is also forced to work with Caleb Forester, the childhood best friend she hasn’t seen or spoken to since she abruptly left him and the small town behind.

Darby is determined to get out of Willow Creek and back on the road as soon as possible, but as she and Caleb rebuild their old friendship, feelings start to grow beyond the familiar and into something new and real and infinitely more terrifying that she’s sure will only lead to heartbreak.

Now Darby must choose between moving on and taking a chance on the one person who could finally be worth staying put for.

A small-town Georgia girl, Shannon finds no greater joy than stepping into the lives and worlds created by the written word. Despite a severe aversion to reading as a child, Shannon has since found a passion for literature that she’s nurtured with incessant reading and a Bachelor’s degree in English. It’s this passion that lets her bring her own imagination to life. Living in Athens, Ga with her sister and their four-legged furry friends, she is almost always in the middle of a book, working on her own stories, or traveling to seek inspiration in the world around her.
Website | Facebook | Twitter | Instagram | GoodReads |

26 Responses to “Spotlight & Giveaway: Risking It All by Shannon Stults”