Hi Joanne and welcome to HJ! We’re so excited to chat with you about your new release, Rule Breaker!

Hello! I hope you’re having a great day! Very glad to be here for a visit about my new Harlequin Desire. 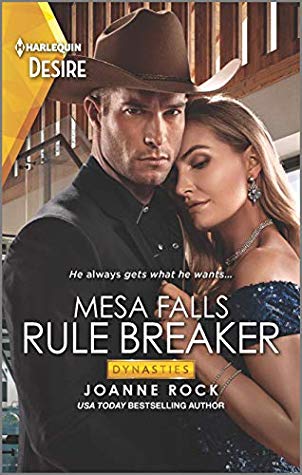 This is book 3 in my Mesa Falls series for Harlequin Desire, and it picks up with one of the owners of a luxury guest ranch in western Montana. He’s got secrets to keep when the heroine– a financial investigator– arrives at Mesa Falls to trace some missing money. Weston Rivera is tasked with keeping an eye on her investigation, but that leads to a whole lot of sizzly together time.

“Maybe a wiser man would have blocked her number….”

The heroine’s first attraction to the hero actually started in the book before this one– The Rival. The heroine sees him working with a skittish horse, and her heart melts at his gentle way with the animal. Weston’s first attracted to April when he makes the trek up the mountain and finds her more prepared than he expected. He begins to see her quiet competence, a quality that draws him to her over and over again in this story.

I adore snowed in stories, so I loved this…

If you love prime time soap operas, with juicy scandal, sizzle, and secrets, this book is for you!

I’m working on the final story in the Mesa Falls series right now! The Heir will be out in early 2021. But until then, readers can look for book 4 in the series- Heartbreaker, in March 2020, followed by my Texas Cattleman’s Club story, Her Texas Renegade in May. Those books are both Harlequin Desires. I also have a book for Tule coming out in May, and it will be the last of my Texas Playmakers, set in Last Stand, Texas.

Giveaway: Open INTL – digital copies of The Rebel and The Rival, the first two books in the Mesa Falls series from Joanne Rock and Harlequin Desire

To enter Giveaway: Please complete the Rafflecopter form and Post a comment to this Q: This story starts on a snowy mountain. What outdoor activity would you enjoy if you were spending a day at a snowy mountain? Skiiing? Snowboarding? Hiking? Sledding? Let me know for a chance to win the giveaway!

On the road from Fallon’s house back to his retreat cabin, Weston glanced over at his lovely but silent passenger. Squinting in the low light from the setting sun, he acknowledged that April wasn’t an easy woman to read. Had her investigative work taught her the impassive observation skills she employed so easily? He hated to think that her life experience—the teenage stunt that had gone so awry for her—had resulted in her becoming more of a bystander to her life than an active participant.
But there was no denying that she seemed reserved tonight. Introspective.
“You’ve been quiet since we left Fallon’s,” Weston noted after he’d pulled into the long driveway that led to his cabin. “Are you having second thoughts about staying in Kalispell? We can get back on the road if you prefer.”
He’d been thinking about kissing her again all day long, his hunger becoming even more insistent after he’d shared the details from his past and she hadn’t seemed to judge him harshly for his failures. Her acceptance had made him rethink what he wanted out of their time together, and he couldn’t deny that—more than anything—he wanted her.
“No second thoughts here,” she assured him as he parked the Land Rover in the double garage. “I was just thinking through my next steps on the investigation so I can set work aside for the night.”
Her words sparked along his skin, igniting a flame he hadn’t wanted to fan until he was certain how she wanted the night to end.
“That sounds promising.” He shut off the engine and moved to the passenger side of the vehicle to open her door, stepping around the snowy tracks left by the tire treads.
She took his hand and let him help her down, her boots stepping close to his. The overhead light in the garage cast uneven shadows, but he caught a flash of something like anticipation in her blue gaze.
“How about we ban all work conversation over dinner?” she suggested, not moving away from him. “No talking about Salazars or finances.”
“Excellent idea.” He shifted his hold on her hand, threading his fingers deliberately through hers. Squeezing. “While we’re at it, we could rule out discussion of our pasts, too. Live in the moment.”
A smile hitched at the corner of her lips.
“This is sounding better all the while. Although I’m not entirely sure I know how to live in the moment if I’m not climbing a mountain.”
It clicked in his head then why she loved climbing. Why she’d seemed different on the mountain—less reserved. Freer, somehow. She left her cares behind when she hiked, forgetting about all the things that tethered her to her day-to-day life.
He could understand that. He’d logged plenty of miles running from his own demons.
“I know how to fix that,” he assured her, drawing her with him toward the entrance to the house. “I’ve got a surefire way to keep you anchored in the present.”
She followed him up two steps and through the door to the mudroom. Inside, a motion light clicked on to illuminate the muted gray travertine tiles and wrought iron coat hooks on the walls, a slim mirror reflecting the image of the two of them.
“You do?” She let go of his hand to shrug off her coat, but he took over the task for her, forcing his hands not to linger on her shoulders. He hung the long wool trench on a hook beside his shearling jacket. “I’ve tried meditation, but I’m not good at it.”
He laughed lightly, returning to her side even though he knew he should start dinner. They’d had a long day, and he wanted to be a good host.
But he’d been ignoring the need for her for hours, and every moment he spent with her wound him tighter.
“Meditation isn’t going to do the job.” He shook his head and stepped closer to her, contemplating the vision she made in her elegant black pantsuit and the long, wild curls that had rebelled more as the day wore on. Her hair had grown springier and fuller.
“No?” Her eyes tracked him, darting back and forth, as if she couldn’t quite figure out what was next.
“No.” He couldn’t wait to touch her any longer, so he didn’t. He slid his hands under all that luscious hair, letting it tickle his knuckles while his fingers splayed over her shoulders and back. Breathing deep, he caught a hint of her fragrance, something subtly spicy and vaguely floral, too. “If you want to feel the present moment, to really dwell in the here and now, you need to make the moment memorable. Make it worth cataloging every minute detail.”
Sliding one of his feet between hers, he let himself feel the heat of her body close to his without pressing himself against her. He felt a warm, delectable anticipation of what was to come.
Her eyes widened, her lips rounding into a small, silent O of either acknowledgment or surprise. Her breath huffed over his mouth, scented with mint and lemongrass tea. Her lips were bare, the natural pink color calling for closer examination before he could describe it.
He looked forward to that. But first, he lowered his voice for close range, stroking a finger just beneath the curve of her jaw.
“The secret to making a moment last, April,” he confided, his whole body tense with wanting. Waiting. “Is kissing.”

He always gets what he wants…She’s strictly off-limits.

That’s never stopped him before.
Rebellious rancher Weston Rivera knows saving April Stephens during a blizzard at his luxury retreat is risky. But it’s not nearly as dangerous as the desire blazing between them. After all, Weston is a prime target of April’s current financial investigation at Mesa Falls—and he’s hiding secrets. Now their searing passion is melting the lines between business and pleasure…even as it threatens Weston’s entire world.
Book Links:  Amazon | B&N | iTunes | kobo | Google |

Joanne Rock is a USA Today bestselling author. She’s written over one hundred books, most recently focusing on sexy contemporaries and small-town family sagas. She enjoys romance for prioritizing relationships and encouraging readers to follow their dreams. A frequent speaker at regional and national writing conferences she enjoys giving back to the writing community that nurtured and inspired her early career. She has a Masters degree in Literature from the University of Louisville. When she’s not writing, Joanne enjoys travel to gather new ideas.
Website | Facebook | Twitter | Instagram | GoodReads |

« Spotlight & Giveaway: Heart of the Texas Warrior by Eve Gaddy
REVIEW: Something in the Air by L.H. Cosway »