Hi Nicole and welcome to HJ! We’re so excited to chat with you about your new release, Runaway to the Outback!

Hi HJ, thanks for having me. I love visiting your blog!! 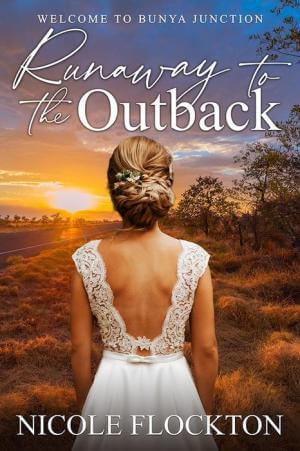 Runaway to the Outback is, for Pandora, about reclaiming her life back. Taking a risk that ended up paying off for her. For Jonas, it’s about learning that not always being in control of everything is okay and that accepting someone’s help isn’t a bad thing.

Oh you know there are a few that I like, but I won’t share them all. I’ll only share a couple. Here’s the first one:
“Should we expect an angry groom and other members of a wedding party to come crashing through the doors shortly?”
I mean, what else is Jonas, our hero, supposed to ask when a fully decked out bride walks into his country pub?

Jonas also has a serious case of foot in mouth disease during his first encounter with Pandora. Here’s a gem from him:

Although,” he paused and looked back at the door his sister had exited out of, “I’m not sure why she seems so starstruck by you.”
“Ouch. Way to make a girl feel special.”

And one last one:

“Will you need any help getting out of your dress?”
“You offering?” Pandora arched an eyebrow, accentuating her sparkling blue eyes.

I wouldn’t say any one thing inspired this book. I’m very much a pantser so I don’t plan or plot things out or use inspiration boards when it comes to my writing. I don’t even search the internet for pictures to base my characters off. I have a basic blurb, a rough idea of what I want to write and go from there. I let my subconscious do the work and it usually comes up with some good ideas to add into the book as I write it.

Jonas is a hard worker who, in my original story proposal was going to be the town policeman, but making him the pub owner worked out better in so many different ways. He does have a bit of a hero complex so he always wants to fix things and he fights with himself to not dive in and fix Pandora’s problems – which end up biting him in the butt afterwards because he makes assumptions he shouldn’t.

Like Jonas, Pandora is a hard worker, but I think it’s something she subconsciously does more than consciously. One split decision changed the trajectory of her career and her life. It turned out to be the best thing for her and it wasn’t until she took time to herself, did she work out what she really wanted.

From my answer above I don’t really do a lot to get to know my characters, they evolve onto the page as I write them so that’s how I get to know who they are and their quirks.

I think my favorite scene will be the opening one. The idea for it has been sitting in my mind for years and now I’ve finally been able to bring it out into the world and share it.

SILENCE DESCENDED LIKE a dark thundercloud over the room. The only sound came from the rugby game blasting from the televisions. Jonas Carruthers stopped wiping the wooden bartop and looked toward the door to see what had made the afternoon patrons of his pub cease their conversations. He blinked once, then again, convinced his eyes were playing tricks on him.
But no, they weren’t.
Standing in the doorway surveying the room was a bride. An honest-to-goodness I’m about to walk down the aisle bride. And she definitely wasn’t a Bunya Junction resident. If she was, Jonas would know her. He knew everyone in the place.
How she managed to squeeze the dress she wore through the door was a feat in itself. The top was moulded to her body like it had been painted on. Delicate lace covered her creamy coloured shoulders. The bodice was sprinkled with crystals, which caught the light and cast tiny rainbows around her.
The bottom of the gown ballooned out at the waist like a bell. A mass of frothy white fabric he was sure both his sisters would love. And the only reason he had any knowledge whatsoever to do with wedding dresses, was because his older sister, Sindy, had just got engaged and she made a habit of spreading her bridal magazines in front of him, asking for his opinion. What the heck did he know about which wedding dress style would suit her? His love for his sister was the only reason he listened to her go on about empire waist, A-line, and mermaid-style dresses.

The scene where the town was waiting for news on one of the residents who needed surgery. This character is a side character but he’s a town favorite so everyone was worried about him.

“The length of surgery depends on what they find when they go in. I think Scott mentioned Ray had two arteries blocked, so they’ll need to work on those and sometimes, once they get in there, there’re more issues. But Ray is a fighter. I don’t believe he will give up without one hell of a battle.”
The door opened and everyone spun around to see who had entered. Sindy let out a little squeal of happiness and raced over to Ryan. His arms closed around his fiancée and Jonas met his gaze. He could see the question in Ryan’s eyes at Sindy’s reaction to seeing him, but he shook his head. Jonas would tell him later, when things had calmed down.
“Do you think he knows anything?” Pandora asked.
Out of reflex he slung an arm around her shoulders and pulled her close to him. His body heated from the contact and when her arm slid around his waist he almost fist pumped the air. A silly thought to what was probably a reflex reaction for her as well. Although she’d never reciprocated when he’d done it before. “I’m not sure,” he said. “Maybe.”
As Ryan and Sindy made their way close to where he stood, Jonas could make out the fine lines of exhaustion surrounding Ryan’s eyes. While he wanted to keep Pandora close, he reluctantly pulled his arm away. “You look like you need a drink.”
“I’d love nothing more than a scotch, but I’m never real- ly off duty, so just give me a Coke.”
“Coming up. Any news on Ray?” He figured he’d ask the question he knew was on the tip of everyone’s tongue.
Ryan sighed. “Not yet. Which means, he’s been in sur- gery for about six hours now, so they’ve obviously had to do more than they initially thought.”
The atmosphere in the room seemed to get even more sombre, if that was possible.

Yes, this book is a quintessential Nicole Flockton book. It has heart, sass, sparkle and plenty of romance.

I always want my readers to feel good after they’ve read one of my books. I hope they get a sense of community and friendship from the residents of Bunya Junction. And a few laughs as well.

I’m about to start the third book in a series I first started and published back in 2015. Finally my schedule has freed up for me to tackle the final two books of the series. In November I have a release in my Station 7: Crew 5 series that I write in Susan Stoker’s fan fiction world. Book 3 and 4 of Welcome Bunya Junction will release in January 2022 and March 2022 respectively.

Giveaway: An ebook copy of Runaway to the Outback & 3 Tule ebooks

To enter Giveaway: Please complete the Rafflecopter form and Post a comment to this Q: Have you ever made a decision that changed the direction you thought your life would go in?

Excerpt from Runaway to the Outback:

Running away never felt so good…

When overworked supermodel Pandora Sebastian flees a taxing photoshoot and takes refuge in Bunya Junction’s only pub—all while dressed as a bride—the locals are unexpectedly welcoming. Pandora may not be a runaway bride, but she does need a break from her high-powered career. Why not stay in this idyllic little country town and consider her options?

Jonas Carruthers thinks he’s seen it all—until Pandora bursts into his pub and his life. She’s everything he doesn’t expect her to be: kind, compassionate, hardworking, and interested in him. And despite wanting to help her, she’s also the only one who can own her mistakes, fix the PR mess she’s in, and rescue her career.

As much as she wants to stay hidden in Bunya Junction, Pandora needs to face the press and wear the consequences. Jonas has been great, but there’s no way he’ll step up to support her choices. Or will he?

19 Responses to “Spotlight & Giveaway: Runaway to the Outback by Nicole Flockton”