Today it is my pleasure to Welcome author Miranda Liasson to HJ!

Hi Miranda and welcome to HJ! We’re so excited to chat with you about your new release, SEA GLASS SUMMER! 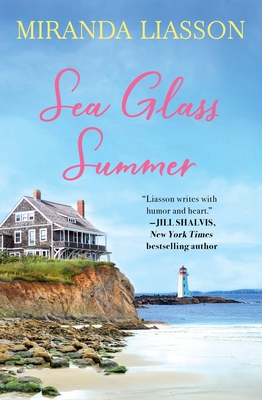 Kit Blakemore is a military widow trying to get her life started again and give her young son Oliver a great summer in the process in the beach town where she grew up. But they are both struggling.

Enter her deceased husband’s brother-in-arms, Alex de la Cruz, a man who’s always been aloof to Kit, to renovate the old house she must sell in order for her to kickstart her and Ollie’s lives.

Alex bears a heavy burden of survivor’s guilt. This drives him, in the name of his best friend, to desperately want to help Kit to secure her future.

Sparks fly between these two while they work through layers of grief and guilt to find understanding, self acceptance and…love! Kit’s two lifelong best friends are there to help her along the way. It’s an emotional book but also funny and hopeful…not depressing!

“If you can’t take things a day at a time because they’re too overwhelming, then take them a half day at a time.”

This derives from the Spanish version of our American saying “Take things a day at a time.” I love this because it reminds me when I’m overwhelmed by something, to just look at things piece by piece, bit by bit.

Alex, Kit’s deceased husband Carson’s best friend and brother-in-arms, has come to renovate a delapidated old house, Carson’s inheritance. He’ll do the work and Kit can pay him for the cost of materials once the house sells.

At first, they don’t get along at all. He is prickly and she knows that he doesn’t like her, plus he’s come to help despite Kit explicitly telling him not to. But they can’t help but share a bond of grief, and this is what initially draws them to one another. They see and feel the palpable and deep-seated loneliness in each other. Kit understands that Alex has come to help out of his love for Carson.

Plus, he makes terrible decorating decisions, and for the first time in a long time, Kit finds that that matters to her a lot. She gets involved herself because she can’t bear what he wants to do to the house!

This is Kit and Alex arguing about the renovation of the house:

“I think it would be best to just let me do what I came here to do.”
Kit folded her arms and looked at Alex. “Just to let you know, I choose to ignore any male who starts a sentence with ‘I think it would be best.’”
His other brow shot up, but he didn’t say a thing.
“Maybe we can compromise,” Kit said in an overly cheerful tone. “If I help pick things out while you keep working, we both win.”
He sighed heavily and pinched his nose. Mr. Cool and Calm had an irritation point she was clearly hitting the bull’s-eye on. Repeatedly. She was poking the bear, but she couldn’t seem to stop.
And heaven help her, watching him get agitated was actually a little…fun.
“What’s wrong with the pink toilet?” he asked with measured patience.
“Nothing, if it were 1957,” she said sweetly.

…if you love lots of emotion, fun banter between the hero and heroine, the beach setting, lifelong women’s friendships, and little Ollie, who I think steals the show! SEA GLASS SUMMER is an emotional, heartwarming read that is perfect to take to the beach or read on your porch while sipping your cold drink!

I just turned in the third Seashell Harbor book, titled THE SUMER OF SECOND CHANCES, about Kit’s friend Darla, a cancer survivor who has a tenuous and tumultuous relationship with her ex-husband, Nick. And I’m in edits with the second book in the Sweetheart series for Entangled Publishing, called THE SWEETHEART FIX, a series about three sisters whose family owns a boulangerie in a small Indiana town. I’m happy to be busy writing!

Giveaway: A print copy of SEA GLASS SUMMER, U.S. and Canada only

Kit was just texting back when she heard pounding. Harsh, metal-biting-rock kind of pounding. The distinct, sharp chink of a heavy implement repeatedly splitting stone, echoing through the early morning quiet. She rose from the peeling old chair and carefully walked down the crooked back porch steps, along the side of the house and around the tangled, overgrown shrubbery and low-hanging tree branches. All of which gave her plentiful cover as she cautiously rounded the front, hovering her finger over the final 1 in 911, just in case. What she saw made her gasp.
A shirtless man was taking a sledgehammer to the already-crumbling steps. And the sight stopped her dead in her tracks.
It wasn’t the awful steps that drew her attention or the enormous sledgehammer glinting in the morning light as he ripped out the old mortar and cracked sandstones that were scattered all about.
A flush of heat rose all through her as she noted the fine smooth lines of tensing muscle, the elegant movements, his lean but strong build. Whoever this man was, he moved with a confident fluidity, with a grace akin to a dancer, and it was mesmerizing.
Lift the hammer, swing down hard—chink went the stone. Another lift and repeat.
No wonder his shirt was off. He was probably burning a thousand calories a minute. Bet his friends didn’t have to drag him out of bed to force him to jog three miles on a chilly morning.
Also, he was way too hot to be cold.
She laughed at the silly joke. It wasn’t like her to be giddy. Well, the old Kit would’ve been, for sure. A sense of relief rushed through her that maybe her old self really was in there somewhere.
Also…her ovaries were still clearly functioning.
Suddenly, the man straightened up. She watched as he ran the back of his hand along his forehead. Then he turned, his expression foreboding, brows drawn down over dark eyes.
Busted.
A shock reverberated clear through her as recognition hit. His pitch-black hair was wavy and longish now, grown out from the high-and-tight military cut when she’d seen him last. And his skin wasn’t tan—that illusion came from his natural Latino coloring. She forced herself to look directly at him. But the intensity of his dark gaze wasn’t any less calming.
Alex de la Cruz. Here, working on Carson’s house. Despite the fact that she’d told him thanks but no thanks. A quick scan showed a shiny black pickup sitting in the driveway. She hadn’t seen it since they’d jogged along the coastline and approached from the backyard.
He took in her leggings, Carson’s old sweatshirt, and her multicolored knit cap with dual pom-poms, a gift from Ollie last Christmas. She saw the moment recognition widened his eyes—and he looked about as pleased as she was.
“Hello, Katherine,” he said, his voice deep and as calm as if they met passing on the street. It sounded mocking because no one had called her Katherine since she’d gotten detention in high school for passing notes in Lit class.
Come to think of it, he’d been the one she’d gotten in trouble with for that. They’d also been chem lab partners, and they’d joked around and had fun. In the days before he’d developed a branch up his butt.
He might as well have called her Mrs. Blakemore for all the formality brimming in the deep baritone of his voice.
He’d always been a little odd. When Carson was around, Alex rarely even glanced at her, giving the air of barely being able to tolerate her. She’d written it off as him being one of those men who simply didn’t “see” women—as equals, anyway. Still, she’d put up with him because Carson had loved him.
Anger welled up. Because besides ignoring the fact that she’d told him not to come, he was doing things to Carson’s house uninvited. Actually, worse than that. In defiance.
“Hello, Alex,” she managed as she struggled to choke down her fury. “What are you doing here?”

Kit Blakemore is ready to live again. After her husband died while serving in the military, she was in a haze of grief. Now she wants to reclaim her former self—finish her degree and find a better career to provide for their sweet little boy, Oliver. To do that, she’ll need to sell her late husband’s dilapidated Victorian in Seashell Harbor. But first, Kit intends to give Ollie the kind of unforgettable seaside summer she had growing up, making lifelong memories and friendships.

Of course, nothing goes exactly as she planned. Ollie is struggling with his confidence, and frankly, so is Kit. But everything changes when her husband’s best friend, Alex de la Cruz, returns to town, offering to help her renovate. She doesn’t expect Alex to temporarily move in…or for him to bond with Ollie…or for her numb heart to begin thawing. Slowly he’s helping Kit and Ollie heal, and it scares her to death.

Kit swore she wouldn’t leave herself open to the pain of loss again. But if she’s going to teach her son to be brave and move forward, Kit must first face her own fears.
Book Links:  Amazon | B&N | iTunes | kobo | Google |

Miranda Liasson is a bestselling author who writes about the important relationships in women’s lives as well as the self-discovery and wisdom gained along the way. Her heartwarming and humorous romances have won numerous accolades and have been praised by Entertainment Weekly for the way she “deals with so much of what makes life hard . . . without ever losing the warmth and heart that characterize her writing.”

A proud native of Northeast Ohio, she and her husband live in a neighborhood of old homes that serve as inspiration for her books. She loves to hear from readers!
Website | Facebook | Twitter | Instagram | GoodReads |

« Spotlight & Giveaway: Gage by Sawyer Bennett
REVIEW: A Paramedic To Change Her Life by Alison Roberts »