Hi Terri and welcome to HJ! We’re so excited to chat with you about your new release, Secret Mountain Hideout! 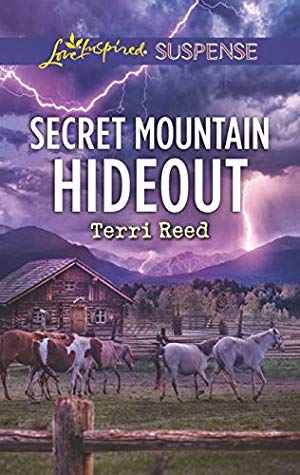 This is the story a young woman who witnesses a murder, goes on the run for fear of her life, ends up in a small mountain town where she feels safe, until the murderer finds her. Now she must rely on a handsome deputy sheriff to protect not only her life by her heart.

She stopped and slowly turned to face him with a stunned expression. She held up her hands as if to ward off his statement. “I don’t know how to ride a horse.”
Moving to her side, he said, “I’m a novice, as well, but we’ll figure it out. Together.” He held out his hand.
After a moment of hesitation, she slipped her hand into his, their palms melding against each other. The heat of her touch raced up his arm and wrapped around him. She was placing her trust in him. He prayed he didn’t fail her.

While writing this book I went through several boxes of hot tamales candy. Cinnamon is supposed to be good for your blood sugar but I think the actual sugar in the candy negates that fact. And the sugar also made me a bit hyper which required me taking breaks to dance around my office to my Spotify playlist, a mix of country and pop songs.

What first attract Ashley to Chase is kindness and charm. He makes her feel seen and cared for, something that has been lacking in her life.
Chase is attracted to Ashley’s bravery in the face of evil and her willingness to be vulnerable when she could easily be callous.

*Ashley had never ridden a horse before and Chase was a novice, so putting them on horseback was fun. I had to remember what it felt like the first time I rode a horse. The awkwardness, the fear of falling and also the wonderfulness of being on the large beast.

Ashley pulled back on the reins like Kaitlyn had taught her. The pale brown horse stopped so abruptly Ashley almost went headfirst over the horse’s snout. Behind her she could feel Chase’s horse bumping up against her horse’s rear flank.
“Whoa,” Chase said.
She glanced back to see his horse dance a little, turning him in a circle. Relieved her horse wasn’t doing the same, she patted her horse’s neck. “Good boy, Othello.”
Othello pawed the ground, no doubt anxious to keep moving or get rid of this uneducated and inexperienced rider on its back.

escape from the post-holiday ho-hums

I’m currently working on the third book set in the same world as Secret Mountain Hideout. Book three will star Deputy Kaitlyn Lanz and the wealthy Nick Delaney, a secret baby, a plane crash, and of course horses. This book will be out next Christmas.
This coming July, Explosive Situation, book four of the True Blue K-9 Unit:Brooklyn, will be released. This is the story of K-9 officer being investigated by an Internal Affairs officer but when a bomber starts terrorizing Brooklyn, they work together, along with a bomb sniffing Beagle, to bring the bomber to justice.

To enter Giveaway: Please complete the Rafflecopter form and Post a comment to this Q: Have you ridden a horse, and if so, what was your first experience like?

“Jane! Wait.”
Hesitating, Ashley warily turned to find Deputy Chase Fredrick striding toward her, looking handsome in his brown uniform. His sandy blond hair swept over his forehead in an appealing way and his intense blue eyes bore into her. He’d always been kind and charming when he’d come into the Java Bean for coffee.
In different circumstances, she might have been tempted to flirt with him, but there was no place in her life for a man. It was bad enough she’d made friends who were going to be hurt and disappointed by her departure. She regretted causing anyone pain and wouldn’t make that mistake again.
What did the deputy want? Dread clawed through her. Was her ruse up? Would she find herself in jail? Or worse—dead?
Desperate to get on the bus, Ashley thrust her ticket to the driver, but he didn’t reach for it as he stared at her a moment and then turned his gaze to the deputy who’d come to a halt at her side and touched her elbow.
Panic revved Ashley’s pulse. “What are you doing here?”
“I could ask you the same thing.” His blue gaze searched her face. “Why are you leaving town?”
Stiffening her spine, she replied, “It’s none of your business.”
“It is my business if you’re a criminal,” he stated in a low voice.
She drew back. Fear fluttered in her chest. “I don’t know what you’re talking about.”

Staying hidden has kept her alive…

But now she’s been found.

A remote Colorado mountain town and a fake identity have been Ashley Willis’s safe haven since fleeing after she witnessed a murder—but now the killer has found her trail. Desperate and terrified, she’s prepared to run again…but Deputy Sheriff Chase Fredrick won’t let her. With the lawman by her side, can she face danger head-on…and live long enough to bring a murderer to justice?
Book Links: Amazon | B&N | iTunes | kobo | Google |

« REVIEW: Hunting for a Highlander by Lynsay Sands
Spotlight & Giveaway: The Love We Keep by Toni Blake »