Hi Tara and welcome to HJ! We’re so excited to chat with you about your new release, Shielded in the Shadows, Book 17 of Where Secrets Are Safe!

So good to be back again! Thank you! 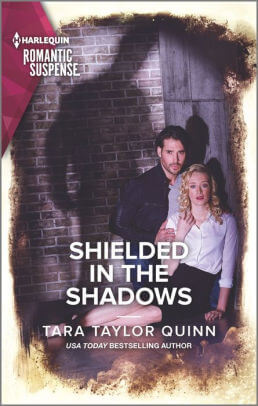 Parole officer who believes in giving his clients second chances, meets sexy prosecutor who believes his star client is guilty of re-offending.

Shots rang out. At first, Jayden Powell had thought a car had backfired. Ducking behind a tree by instinct, he identified the source as gunfire seconds before the sound came again and he fell backward with the force to his chest. Upper right. The only part not shielded by the trunk he’d been using for cover.

They are attracted to each other for the same reason – they’re both workaholics! And then there’s the body chemistry that neither want and neither can deny.

It’s worth the hard work.

“You said you go for casual relationships, though.”
“Occasionally.” He was a healthy man, whether he deserved to be or not.
“Is that what this is?” she asked as she stabbed another bite.
“That would be up to both of us, wouldn’t it?” he asked. The chicken wasn’t bad. And when he loaded up the potato, it was pretty good, too.
“We’re both married to our work,” she pointed out.
“True,” he agreed, trying to focus on being busy with his. They’d come together that afternoon for work.
“We know the score.” She punctuated the sentence with stabs of her fork in midair. “Which means no one will get hurt.”
He had a mouthful and so he nodded.
“So, what do you say?” Her gaze seemed to grab his.
“What do you say?” He was playing with her now and enjoying himself more than he probably should.
But she seemed to need his attention as much as he wanted hers. He wasn’t going to snub her. It wasn’t his way.
And when it ended, he’d feel a pang. That would be worse than the guilt he felt at getting what he wanted.
“I’d say that by being who we are, and being here, we’ve both already said yes.”
She’d swallowed the food in her mouth, was watching him. He leaned over and kissed her. Right there in the restaurant. His ribs be damned.
Lips only. And only for a second.
But the deal was sealed.

I can’t do my favorite scene as it’s toward the end of the book and gives away too much. But, I’m quite fond of this one:

He was still hot.
Maybe hotter.
Shut up!
Emma’s internal monologue didn’t bode for a good meeting as she strode toward the probation officer standing in the reception area of the newly established Santa Raquel County prosecutor’s office.

She’d been out with friends when he’d called the night before. She’d also been halfway through a glass of iced tea at a wine bar and defending herself against their constant barrage in her ongoing fight against giving in and getting a cat. She’d mentioned one night over wine that she hated going home sometimes because there was nothing there but furniture and things. She’d been trying to confide in them about something hugely personal. They’d been certain her solution was a self- sufficient pet .

Growing her family was already in her plans – but not with a cat – and because of her friend’s earlier reaction she wasn’t yet sharing that tender and fragile news with anyone. Her friends also had no idea she was prone to thinking that the man in front of her in jeans and a light-colored polo shirt, with a weapon on his hip, was Hunk of the Month material. And good for all twelve months.

Jayden was in bed, watching TV since he wasn’t going to kid himself into thinking he was going to close his eyes and go to sleep—rather, he’d be closing his eyes and getting hard as he relived the after dinner feast he’d enjoyed—when his phone rang.
Emma.
“Hey!” He grabbed his phone up immediately, sliding the answer button across the screen with his thumb with the phone already on his way to his ear. “I’m glad you called.”
She wanted to talk as badly as he did, he assumed. Was unsatisfied with the way things stood between them. Deeply so.
“I need you to check Bill Heber’s location from tonight.” Her terse words didn’t fit into the post-sex daze.
Sitting up, he muted the TV, some documentary about the way cheese was made, and flipped on the lamp on his nightstand.
“Come again…”
“The locations app, I need you to check it, please.”
She was sounding professional…but…familiar, too…like she had the right to call him at ten at night to ask a favor.
He yanked on a pair of basketball shorts to cover his nudity, stumbling a bit as he tried to step into them while holding them with one hand.
“What’s going on?” he asked, half hopping toward the bedroom door on his way to his office. He could check the app on his phone, but didn’t want to take it away from his ear. To stop talking to her.
“Someone was at my house tonight. They wrote ‘Leave it alone’ on my sliding-glass door in red.”

If they like Robyn Carr, Heather Graham, or intense emotional fiction in general!

I’m currently working on a Harlequin Romantic Suspense book that’s due in August. It’s part of my new Sierra’s Web series that debuts in September with a free on-line read on Harlequin.com! And upcoming: In four days, on June 15th, A Mother’s Secret’s releases from Harlequin Special Edition, and on July 1st, Colton 911: Family Defender releases from Harlequin Romantic Suspense, followed by the free on-line read in September!

Giveaway: Three eBook copies, to three winners, of A Defender’s Heart – Book 15 in the Where Secret’s Are Safe series.

To enter Giveaway: Please complete the Rafflecopter form and Post a comment to this Q: Do you prefer super hot heroes, or more nerdy ones?

Excerpt from Shielded in the Shadows, Book 17 of Where Secrets Are Safe:

Emma Martin does her best to keep her past to herself, her heart hidden. But working closely with parole officer Jayden Powell has the attorney considering breaking her own rules. When a dire threat turns lethal, Jayden proves just how far he’d go to protect Emma. Would she go just as far to let him in—guarding her body and her heart?
Book Links: Amazon | B&N | iTunes | Goodreads |

« REVIEW: It Started with a Secret by Jill Mansell
Spotlight & Giveaway: The Benefactor by Nana Malone »

15 Responses to “Spotlight & Giveaway: Shielded in the Shadows by Tara Taylor Quinn”