Today it is my pleasure to Welcome author Claire Wilder to HJ!

Hi Claire and welcome to HJ! We’re so excited to chat with you about your new release, SPEEDING HEARTS!

Hello there! Thanks for having me. 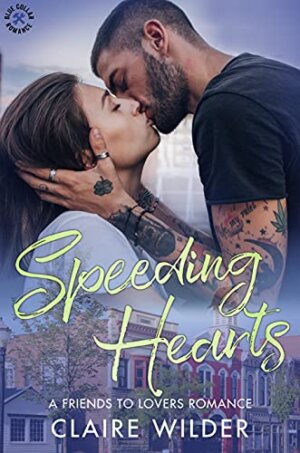 S is for Sexy
P is for Pipes (you know the kind I mean!)
E is for Emotional
E is for Exciting
D is for Drama
I is for Independent woman
N is for Never say never
G is for Going after her dreams

H is for HEA
E is for Elevated heart rates
A is for Action
R is for Racing
T is for Track
S is for Speeding Hearts!

A spray of dirt hit me straight across my clean white t-shirt—and I wasn’t even mad about it.
I grinned, adrenaline jolting through my core as if I were behind the wheel of the stock cars speeding around the dirt track before me.

Stella Archer is a woman not afraid of a challenge. She grew up with two older brothers and a taciturn father, also a mechanic. She ran her own mechanic shop back in her hometown of Barkley Falls, New York. Stella loves cars. While fixing them is her vocation, racing them has always been her secret dream.

Dean Archer is a handsome, tattooed, tough guy, but appearances are deceiving. He’s also a genuinely good guy who spends his downtime caring for his ailing dad–even though they don’t exactly get along. But Dean hasn’t always done the right thing, and he won’t let himself forget it.

Stella and Dean first met in Stella’s automotive shop back home. Though he was working as a contractor for a construction firm at the time, he was responsible for bringing in the company trucks in for servicing. She discovered this builder had an uncanny knowledge of engines, and they bonded over shop talk, becoming good friends. But being knowledgeable, sexy, and an actual good guy–who she knows will never try anything–is a potent combo. Stella’s always harbored a secret crush on her best friend.

“I’ve always wanted you, Stella,” he said. “From the moment I laid eyes on you. Before I knew you. Stella, I—” he choked on the words.
I held my breath, waiting for him to continue, but instead, he dipped down and kissed me.
Dean’s lips were hard and soft all at once, his tongue urgent as it sought mine.
It was better than all my fantasies.

This is a scene right after Dean has taken Stella on a tour of his hometown, where they–oops–ran into Dean’s ex-girlfriend. This scene would be perfect for an audition because it highlights both the easy friendship between them, and the feelings that run deeper.

The ride home was painfully quiet, and as I pulled up to the motel, I fumbled with the words I wanted to say. “Stella, I’m sorry if that was awkward, I just—”
But Stella shook her head. “Dean, it’s fine.” She hesitated. “This is weird, that this is weird.”
I couldn’t help but laugh at her choice of words. “You’re weird,” I said, and she smiled for the first time since we stepped into Gino’s.
“Dean, I came here because I wanted to race cars, not to get in the way of your life. So, you can just… pretend I’m not around, if you want.”
“Stella,” I said, wanting to laugh at the absurdity of that. How could I pretend she wasn’t around? The fact of her being here was like a brilliant light shining in a dark room. “How could you possibly get in the way of my life? You fit perfectly.”
I realized too late how that sounded—the words were already out there. I saw her eyebrows shift just slightly up. Shit.

Don’t let your past dictate your future.

I’m planning out my next series, launching in 2022! My next release and last of the year is ALL YOUR FAULT, Book Five in my interconnected standalone Jewel Lakes Series. The main character is Stella’s older brother, Will!

Giveaway: To win a signed paperback copy of SPEEDING HEARTS, enter my exclusive Harlequin Junkie contest on my website! clairewilder.com/hjgiveaway

I’m not afraid of anything. Except falling for my best friend.

Stella Archer has never been afraid of a challenge.

She was the first woman mechanic in her hometown. She runs her own garage. And when her best friend and fellow mechanic Dean announces he’s moving back to his hometown? Instead of being devastated, she jumps at the chance to work part-time at his uncle’s dirt track—and finally fulfill her dream of racing cars.

But with plenty of time to train with her best friend, for the first time in my life, Stella’s scared. Scared that racing isn’t really what she wants.

Scared that Dean is.

When I’m not writing I’m either reading, riding my e-bike (don’t knock it ’til you try it!) taking long walks by the water or frolicking in the trees with my husband and 3 kids.

« REVIEW: Just One Chance by Carly Phillips
Spotlight & Giveaway: The Woman at the Front by Lecia Cornwall »