Today, HJ is pleased to share with you Brenda Novak’s new release: Summer on the Island

New York Times bestselling author Brenda Novak’s newest standalone novel about friendship, family and the ties that bind and challenge us follows three friends as they escape to a coastal Florida town for the summer. 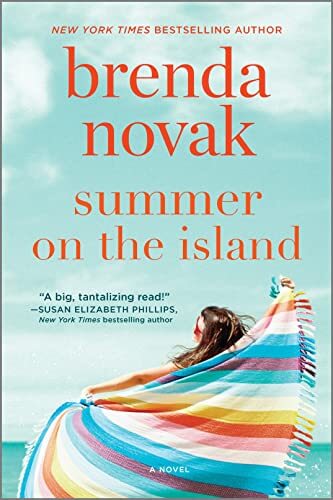 After the death of her US senator father, Marlow Madsen travels to the small island off the coast of Florida where she spent summers growing up to help her mother settle the family estate. For Marlow, the trip is a chance to reconnect after too long apart. It’s also the perfect escape to help her feel grounded again—one she’s happy to share with friends Aida and Claire, who are hoping to hit reset on their lives, too.

A leisurely beachfront summer promises the trio of women the opportunity to take deep healing breaths and explore new paths. But when her father’s will reveals an earth-shattering secret that tarnishes his impeccable reputation and everything she thought she knew about her family, Marlow finds herself questioning her entire childhood—and aspects of her future. Fortunately, her friends, and the most unlikely love interest she could imagine, prove that happiness can be found no matter what—as long as the right people are by your side.

Enjoy an exclusive excerpt from Summer on the Island

Excerpt. ©Brenda Novak. Posted by arrangement with the publisher. All rights reserved.

Giveaway: 1 Finished Print copy of Summer on the Island by Brenda Novak. US only

Brenda Novak, a New York Times and USA TODAY bestselling author, has penned over sixty novels. She is a five-time nominee for the RITA Award and has won the National Reader’s Choice, the Bookseller’s Best, the Bookbuyer’s Best, and many other awards. She also runs Brenda Novak for the Cure, a charity to raise money for diabetes research (her youngest son has this disease). To date, she’s raised $2.5 million. For more about Brenda, please visit www.brendanovak.com.

31 Responses to “Spotlight & Giveaway: Summer on the Island by Brenda Novak”