Today it is my pleasure to Welcome author Kadie Scott to HJ!

Hi Kadie and welcome to HJ! We’re so excited to chat with you about your new release, Taming the Troublemaker! 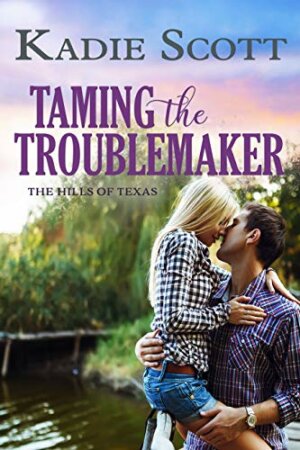 This might be my cutest book yet. Autry is the Hill Family playboy, always up for a good time. But his parents think its time he gets more serious, so they bet him. No women or shenanigans for a while. If he wins, he gets the house he loves so much.

Enter Beth, who he’s known all his life–the good-two-shoes elementary teacher and all round town sweetheart. A seriously steamy kiss and then a series of mishaps brings them together. A kid named Dylan who needs them just might keep them together.

“I have a proposition to put to you.”
Autry Hill glanced up from his breakfast, a forkful of eggs hovering in midair halfway to his mouth, to find his father dropping into the seat across the table.

Two of the funniest (and you would think most unlikely) scenes from the book are based on things that actually happened to me. There’s a scene where Beth locks her purse in someone else’s truck. (I did that, only it was a minivan. True story.) And there’s a scene with a skunk. (Okay, so I might’ve had a bit of fun with that scene because I was making myself laugh. Lol.)

Autry is the playboy and Beth is the good girl. It’s an opposites attract tale. However, what surprised me as I wrote it was how easily they fit together despite those differences. Beth might be the good girl, but she’s full of fire and sass and is more than a match for Autry. And he might be up for a good time, but the man is good down to his boots—loyal, protective, and positive.

Beth would absolutely be Lili Reinhart (from Riverdale)—sweet but spunky.

Autry would be Sam Claflin—You can see in his eyes that he’s kind.

Wouldn’t you love to see them play out this scene???

“I tell you what, Elizabeth Ann Cooper…” He deliberately mimicked her use of full name. “I will give you your purse back on one condition.”
Narrowed eyes greeted his statement. “What condition?”
“A kiss.”
“What?” she squawked, arms flailing. “No way. It’s my purse.”
But even as she protested he could see the flush rising in her cheeks, despite such low lighting. She was definitely interested. One itty-bitty taste to satisfy his curiosity, then back to becoming the straitlaced, stand-up citizen he was determined to prove he could be.
“It’s my truck,” he shot back. “And you’ve insulted my manhood implying I’m not worthy of you.”
Her lips flattened and she shook her head. “Some things never change.”
Autry paused, though he didn’t allow his smile to slip. “What does that mean?”
“It means you had a one-track mind in high school, and years later, you obviously haven’t grown out of it.”
Damn. He’d forgotten Beth’s tendency to call him on his bullshit. Plus, he had that damn bet to consider. Regardless, he would never have made her do it. He might have a thing about teasing her, and he had to admit to kind of hoping she’d take the dare, but he’d never forced himself on a woman. Ever.
He dropped the smile entirely and turned to his truck to unlock it. “I’m just teasing you, Beth. Of course, you can have your purse.”
He grabbed a gray sack the size of a backpack, and just as heavy, from the passenger seat and handed it over to her.
“Thank you,” she said primly as she backed away from him.
Like he was a leper or his flirting might be contagious.
But then the dimples that had teased him as a youth came out to play, her eyes lighting with mischief. “I didn’t figure you for someone who gave up so easily. Guess I won this one.”
With a wiggle that had certain parts of him perking back up, she turned to her truck.
Autry stared at her back for all of two seconds, assimilating her words. Oh, hell no. This slip of a woman was not winning anything… whatever that meant.
He was around the truck to her driver’s side in a few quick strides. Beth squealed when he spun her around by the waist.
“I always win,” Autry said.
He took her lips not harshly, but firmly and chastely, the scent of something light and alluring swirling around him as she gasped.
He was tempted as sin to dip his tongue inside the warm recess of her mouth to tease hers, but he wouldn’t push it that far. With more effort than it should’ve taken, he forced himself to stop at the one peck, pulling back to gaze down into wide, bemused eyes. God, he wouldn’t mind continuing though, his body vibrating like a tuning fork.
With Beth Cooper of all people.
Then he went rigid with shock as Beth went up on tiptoe, wrapping her arms around his neck and putting the first kiss to shame as she showed him what kissing should always be like.

This one is a lighthearted read. I’d love for them to close the book (or turn off their Kindle) at the end and sigh and smile and just enjoy the thought of a couple working the way Autry and Beth do. I’d love to bring a little sunshine into a reader’s day.

For my cowboy romance lovers out there, I’m in the process of wrapping up my Hills of Texas series. Book 4—Claiming the Cowboy (for Christmas) is done and releases in October. And book 5 (tentatively titled Loving the Lawyer) is my current WIP. I should have it to my editor in June and will be crossing my fingers for an early 2020 release. That will be the last book in the series (at least for now).

To enter Giveaway: Please complete the Rafflecopter form and Post a comment to this Q: Are you tempted by the super confident playboys? Or are the strong and steady guys more your thing?

Excerpt from Taming the Troublemaker:

One daring kiss with the playboy tempts the good girl, but can she tame him?

Autry Hill may be a cowboy to his boots, but he’s also gained quite the reputation as a charmer and playboy. His parents aren’t sure he’s ready to take the reins of the family’s prosperous Texas ranch, so they set up a challenge: No women or scandal for the next six months and the ranch house he grew up in is his. Easy peasy, Autry thinks. He’s already tired of late nights and romancing, until elementary school teacher Beth Cooper happens to cross his path. Suddenly Autry is losing his heart, his mind, and what’s left of his reputation.

Good girl teacher Beth Cooper is far too practical to fall for Autry Hill, even if she had a crush on him way back when. The man’s been breaking hearts since middle school. But when he becomes her unexpected champion and then they work together to help one of Beth’s troubled students who’s about to lose everything, she sees a different side of Autry – serious, compassionate, determined and dedicated. And that Autry is nearly impossible to resist. Does she need to?

Award-winning contemporary romance author, Kadie Scott, grew up consuming books and exploring the world through her writing. She attempted to find a practical career related to her favorite pastime by earning a degree in English Rhetoric (Technical Writing). However, she swiftly discovered that writing without imagination is not nearly as fun as writing with it.

No matter the genre, she loves to write witty, feisty heroines, sexy heroes who deserve them, and a cast of lovable characters to surround them (and maybe get their own stories). She currently resides in Austin, Texas, with her own personal hero, her husband, and their two children, who are growing up way too fast.

39 Responses to “Spotlight & Giveaway: Taming the Troublemaker by Kadie Scott”