Today it is my pleasure to Welcome author Leah Vale to HJ!

Hi Leah and welcome to HJ! We’re so excited to chat with you about your new release, The Bull Rider’s Second Chance! 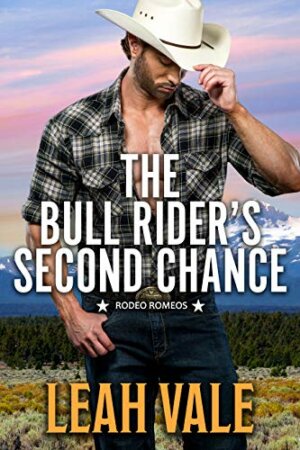 The Bull Rider’s Second Chance is the first book in my Rodeo Romeos series. Caitlin Neisson needs help to face her fears so she can fulfill a deathbed promise. Unfortunately, her best choice is the most notorious member of a family her family has been feuding with her entire life. Bodie Hadley has resigned himself to being an outcast. But from the moment he meets Caitlin, he starts to wonder if redemption may be possible, after all.

“Excuse me.”
Bodie Hadley heard the female voice over the pre-parade commotion and hoped she wasn’t addressing him. His human-ing skills weren’t the greatest on his best days anymore, and with today being the kick-off of the Pineville Rodeo in Pineville, Oregon, he’d been up since the butt-crack of dawn without an additional hit of caffeine. And now at ten a.m., Mr. Friendly Pants he was not.

Bodie’s horse, Dutch, is named for the barrel racing Quarter Horse I pretty much grew up on, Duchess. Granted, my Dutch was a sweet little bay mare and I saw Bodie’s horse as being a big black gelding (no idea why), I still wanted to honor her by naming my hero’s horse after her.

I always knew Bodie would be strong and stoic because of his physical and emotional wounds, but I didn’t expect him to be as protective of Caitlin as he turned out to be. But, well, hero!

“His gaze remained locked on hers as he skimmed his hand higher up her thigh beneath the shorts. Gone was the flirty sparkle that had danced in his eyes when she’d first talked to him at the parade. There was nothing superficial about the way he searched her gaze. He sought an answer to an unspoken question. A question she didn’t know.
He didn’t seem to be asking for permission to touch her. His hand continued its exploration of her thigh.
He lifted his hand from hers and cupped her cheek. “You can’t blame yourself for what happened, Caitlin.”
She nuzzled into his hand. “You first.”
He made a noise deep in his throat. Amusement or frustration? She couldn’t tell.
Caitlin decided she didn’t care when he leaned forward and kissed her.

That everyone is worthy of a second chance. Not just the chance to live their best life, but most importantly, to love and be loved in return.

I am working on the second Rodeo Romeo book, which will be my next release.

To enter Giveaway: Please complete the Rafflecopter form and Post a comment to this Q: Caitlin’s brother Ian believes you can tell a lot about a man from how much his horse likes him. What do you think is the true measure of a man?

Caitlin couldn’t believe she’d actually had the nerve to say the words. But she needed more time with him to ask for his help. All the girls had gone on and on about what a hound dog he’d been, and how he’d agree to anything if he thought he’d get some action in return.
She could promise him all sorts of things. No one said she had to pay up.
Though that kiss…best not to add hot, intense and oh, so delectable into the equation. She needed this man’s help. And she’d rope him in one way or another.
He gently extracted himself from her. “Don’t get me wrong, I’m really flattered, but—”
She cut him off before he could send her on her way. “Please. Can we go somewhere and just talk?” Realizing Ian or one of her other family members could have been the one she’d sensed following her and would be waiting for her in their trailer, she said, “Look, forget about my trailer. But can we go somewhere and talk? Just for a few minutes?”
Bodie heaved a sigh. “All right. Come on,” he relented and gestured for her to follow him.
Shoring up her resolve, she fell into step with him. She didn’t believe for one second her brothers would do as their father said and let her train like an actual bullfighter. Liam would find a way to keep her out of the arena or, at the very least, force her to remain squatting down inside the barrelman’s barrel in the center of the rodeo ring. Relegated to the role of comic relief for the crowd and nothing more.
No, she needed to find someone outside of the Neisson family to help her.
She had no choice but to ask for help from one of the infamous Rodeo Romeos.

Feuding families, a legacy to prove and redemption…

To fulfill a deathbed promise to her mother, Caitlin Neisson must face her fear of bulls to learn how to be a rodeo bull fighter in order to protect her bull riding-wannabe youngest brother. She also needs to find him a teacher before he puts himself in danger. Too bad the best man for the job is her family’s number one enemy. He has a bad attitude and an even worse reputation. To complicate matters, he’s sexy and she begins to suspect his bad boy reputation hides a warm heart that just might melt the ice in hers.

…there’s more at stake outside the rodeo arena

Bodie Hadley was nearly killed by a bull in a rodeo arena and carries the weight of guilt for the death of another. Can he gain redemption by helping Caitlin, a member of the family his family has been feuding with for decades? Or will the weight of additional guilt crush him if he refuses her plea?

Having never met an unhappy ending she couldn’t mentally “fix,” Leah Vale believes writing romance novels is the perfect job for her. A Pacific Northwest native with a B.A. in Communications from the University of Washington, she lives in Central Oregon, with a huge golden retriever who thinks he’s a lap dog. While having the chance to share her “happy endings from scratch” is a dream come true, dinner generally has to come premade from the store.
Facebook |  GoodReads |