Today it is my pleasure to Welcome author Lynsay Sands to HJ!

Hi Lynsay and welcome to HJ! We’re so excited to chat with you about your new release, The Chase! 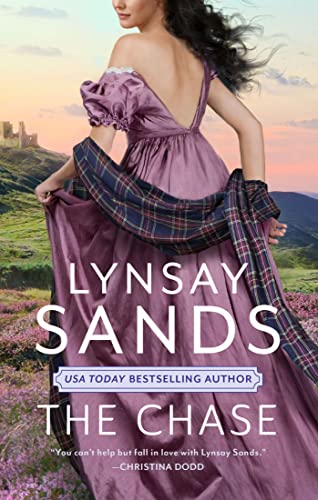 Seonaid has no intention of giving in and allowing her betrothed to just cart her off to England when he’s ten-years-late in retrieving her. He obviously doesn’t want to marry her in the first place so why would she bother going along quietly with a farce of a marriage? Instead, Seonaid and her skilled cousin Aeldra decide to escape in the hopes the Sassenach might leave her be.

Lord Blake Sherwell does not want to get married. Known for his good looks and his ability to charm any woman he encounters, he’s satisfied with life and doesn’t want to settle down anytime soon. However, the King has put down his fist, insisting Blake live up to his promise and retrieve his betrothed. He even sent his own man to escort Blake to Dunbar Castle and be sure the deed gets done. Only problem is his betrothed, Seonaid Dunbar, fled before he even got there. Now forced to wear the Dunbar clan colors for safety’s sake, Blake and his men must pursue his disgruntled and somewhat hostile bride-to-be across Scotland.

“’Twas by no will of God Seonaid Dunbar was sent here.” She slammed one flat hand on her desktop. “’Twas the devil!”
Sister Blanche’s eyes widened, her worry deepening. “Oh, surely not!”
“Aye.” The abbess nodded firmly. “She is the spawn of the devil, I tell you. Sent to trifle with our goodness, and lead us unto temptation.”
“Temptation?” Sister Blanche didn’t bother to hide her doubt.
“Aye. To break one of the commandments.”
“Which of the ten commandments, my lady?”
“Thou shalt not kill.”

When Seonaid first recognizes the man she’s fighting as being her betrothed, Blake Sherwell, she sees why he’s called the “Angel”. In her mind he’s a “fine specimen of a man, and fair-haired and as handsome as an angel”, but she shakes off her wayward thoughts when she’s reminded that this was also the man that hadn’t bothered to come for her for over ten years.

When Blake first sees his betrothed coming at him with a sword he recognizes her by her ice-blue eyes, glorious black hair and her well-formed physique. But it’s only after she discovers who he really is and has the audacity to reject him as her betrothed that he decides that he doesn’t NOT want to marry her after all. He’s instantly fascinated by the only woman who’s ever rejected him.

“How do you plan to get her out of the abbey?”
Blake gave a shrug of unconcern. “The moment she sees me she will come out.”
“She will?” Rolfe sounded dubious.
“Certainly.”
“I see.” He pondered the idea briefly. “Then why ever did she flee to the abbey in the first place?”
“She had yet to see me and had no idea what I looked like,” Blake responded promptly.
“Ah.” Rolfe nodded. “So, as soon as she sees your fair visage—”
“She shall drop to the ground like a ripe plum and prostrate herself at my feet.”
“Of course, she will,” Rolfe agreed with amusement.
“Women have always reacted with favor to my looks.”
“So I have heard.”
“’Tis a curse, really.”
“Hmm. You have my sympathies,” Rolfe said dryly, then added, “There is just one thing that concerns me.”
“What?”
“How is she going to see your fair visage and be overcome? She will be within the abbey walls, and we without. Only holy men are allowed past the gate.”
Blake scowled. “I do not yet know. I have been thinking on it since we left Dunbar Castle, but—” He shrugged before glancing at the man riding beside him. “‘Tisn’t really my problem anyway. You are the one who was supposed to arrange everything. I was simply to travel to Dunbar for the execution.”
Rolfe lips turned up in amusement. “An execution, is it?”
“It might as well be.”
“’Tis sure I am Amaury thought ’twas something similar he was travelling to as well,” Rolfe said with a shrug. “Yet look how happy he is. He was sure Emma would be a hag. Did you know?”
“Nay.”
“Aye. He swore her first husband killed himself rather than go home and perform his duty.”
“Really?”
Rolfe sounded irritated. Glancing at him sharply, Blake noted the tightness around his lips and reminded himself the man was little Emma’s cousin. “Of course, that was afore he set eyes on her. Once he saw how pretty she was, he was fair relieved. Howbeit, that was Amaury and Emma, Lady Seonaid is hardly the same tankard of ale.”
Rolfe rolled his eyes. “You have not yet even met her.”
Blake shrugged. “She is a Scot. And a Dunbar,” he added tightly. “’Tis all I need to know.”

Because it’s really funny. I had a great time writing this one and forgot how funny it was until I reread it again. Seonaid Dunbar is not a woman to trifle with and Blake Sherwell is about to learn that in spades.

Historical reissue, The Chase, is now out on bookstore shelves!

Upcoming Releases…
Argeneau book #35, After The Bite, comes out on September 27th. Valerian is one Argeneau character that’s been around right from the start. We first heard of him in Lissianna and Greg’s story, A Quick Bite, and he’s appeared here and there ever since but we haven’t got to know him… until now. And it takes place on a golf course of all things! Anyone up for a little night golf?

Highland Brides Book #11, In Her Highlander’s Bed, comes out on Jan 31st, 2023. This is Allissaid and Calan’s story and it takes place directly after Claray and Conall’s wedding. What happened to Claray is nothing to what our poor heroine, Allissaid, goes through. But her steel and resolve in the face of unsurmountable obstacles is a true testament to this woman’s character. However, her unsuccessful attempt to steal a plaid ends up bringing the attention of the Campbells down on her. Lucky for Allissaid, they are no friends to the MacNaughton.

What I’m working on now…
I just finished up some edits on In Her Highlander’s Bed and am taking a brief break before starting on the next Argeneau story.

Giveaway: Two signed copies of The Chase of course! (International)

To enter Giveaway: Please complete the Rafflecopter form and Post a comment to this Q: If you met someone that was drop dead gorgeous and charming as hell but had an ego the size of Greenland, would you still continue with the date?

Excerpt from The Chase:

In this charming historical romance classic from New York Times bestselling author Lynsay Sands, a Highlands hellion flees the handsome “English devil” she’s been promised to, and he realizes that his enchanting prize will be much harder to win than he imagined.

Seonaid Dunbar had been trained as a Scottish warrior at her father’s knee, and she would rather fight than flee. But running away to an abbey was preferable than marrying Blake Sherwell. No, she’d not dutifully pledge troth to anyone the English court called “Angel.” Fair hair and eyes as blue as the heavens hardly proved a man’s worth. There was no such thing as an English angel; only English devils. And there were many ways to elude a devilish suitor, even one that King Henry ordered her to wed.

The next Countess of Sherwell was not sitting at home in her castle, embroidering, peacefully waiting for Blake to arrive. No, she was fleeing to a new stronghold and readying her defenses. Swords and sleeping drafts, Claymores and kisses. This battle would require all weapons–if he ever caught her. And the chase was about to begin.
Book Links: Amazon | B&N | iTunes | kobo | Google |

My name is Lynsay Sands and I’m the author of the Argeneau series and many hysterical historicals (as my readers tend to call them). I have written over sixty-six books and twelve anthologies, which probably tells you I really enjoy writing. I consider myself very lucky to have been able to make a career out of it.
Website | Facebook | Twitter | Instagram | GoodReads |

« Spotlight & Giveaway: When Sparks Fly by Jo McNally
REVIEW: The Billionaire Behind the Headlines by Rachael Stewart »

38 Responses to “Spotlight & Giveaway: The Chase by Lynsay Sands”