Today it is my pleasure to Welcome author Susan Lute to HJ!

Hi Susan and welcome to HJ! We’re so excited to chat with you about your new release, The Christmas Makeover! 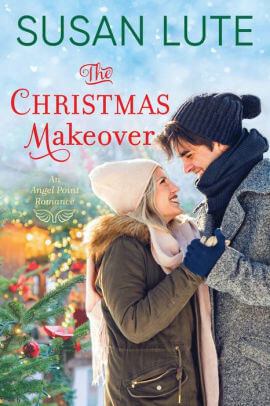 A sweet friends to lovers story, The Christmas Makeover is a small-town cozy Christmas romance, the third novel set in the Oregon Coastal town of Angel Point. While he makes sure his grandma’s new bakery is a success, Grant’s editor turns down his proposal for a new Christmas cookbook. He’s not that easily discouraged, so he turns to his best friend for help. If anyone can turn him from a geek baker into the perfect premier pastry maker his editor has to take seriously, it’s Faith, who in a previous life, was a Broadway costume designer. But Faith is torn. She loves Grant just the way he is, mismatched socks and all. When he promises to show her the magic of Christmas and to teach her how to make his famous Christmas fritter, how can she say no? From there it’s not long before Grant is wondering . . . has he got his Christmas wish all wrong?

Grant: “Challenge accepted.” He winked at her. “In fact, as your friend, I’ll bet you a cup of coffee—not made from beans from Hawaii—that I can make you fall in love with Angel Point’s version of Christmas.”

“Show me your socks,” Faith demanded.
His brows shot up, but he complied. Faith sucked in a relieved breath. There they were. Bold. Bright. Different, yet similar. He was still the same, but yet not, the pastry chef who brought her Christmas fritters and loved his grandmother.

The smile that lit up her eyes as she took his hand was the best Christmas gift he could have asked for. The lady was strength and gentleness wrapped in the cinnamon scent of the holiday. He drew her into his arms, slowly inching her closer until his chin rested against her temple. They swayed to the low whisper of the bow being drawn across violin strings.

I’ve wanted to write a “groom makeover” story for a long time. The Christmas Makeover is my version of that. Then, what if Charles Dickens’ main character in A Christmas Carol was a lady (Eleanor)? Also, who isn’t inspired by Christmas?

Grant loves, loves, loves Christmas. Faith is more bah humbug. As I get to know my characters, I dive deep into their goals, motivations, and conflicts. I answer a few questions about who they are at the beginning of the novel and where they will end up at the end. It’s the surprises discovered along the way that make getting to know them worthwhile. For instance, who knew Grant always wore mismatched socks and why? Or that Faith had a crush on Grant long before he asked her to give him a makeover?

As I’m writing, every scene locks into the next. I see them moving across the screen like a movie. That makes it hard to pick my favorite, but I guess I would say my favorite scene is when Grant realizes he wants more than to be best friends with Faith.

“Is Tara coming?” Faith wrapped both hands around her cup. She wore knitted fingerless gloves. Her fingers were tipped with charming Christmas-red nail polish.
“She can’t make it.”
“Oh no. Why?” Faith leaned against his arm in sympathy. His chest warmed. “Grant, we can fix this. We’ll just go and convince her to come and participate in the festivities.”
“Hold on there.” He stopped her with a light grip on her arm. How could he put this? “She’s busy learning her part, and it’s okay. Honestly.”
She searched his face. “Are you sure?”
“Absolutely.” He gently urged her forward. “How about we make a new pact. The rest of this week is all about enjoying Christmas.”
The frown line between her brows cleared. Her lips turned up as she tugged on his coat, pulling him forward. “Deal.”
They spent the next hour caroling. The parade ended in Seagull Park north of Warren. A lone fir tree sparkled with lights and decorations from the star tree topper to the bottom limbs while lamplight cast a cozy glow over a Christmas village of booths selling everything imaginable for the holiday: wreaths, stockings, candy, books, small toys, food and drink. Santa was seated in his sleigh chair by the tree, and elves helped kids line up to tell Santa their Christmas wishes.
He watched the kids bounce around in line. Angel Point would be the perfect place to raise a family. He’d always known that, but tonight, it seemed so much more real.
He glanced at Faith as he escorted her to a fire pit in the middle of the celebration. Wood benches formed seating around a low fire. Sitting, he patted the bench beside him. “When do you want to have your next baking lesson?”
“What will we be making?” She sat beside him. The reflection of Christmas lights sparked in her dark eyes.
“My almost famous Christmas fritters, of course.”
“Of course. About time, too.”
He laughed and shrugged one shoulder. As much as she loved eating them, it was a given the fritters wouldn’t be a hard sell. “So, the menu is okay with you?”
Her tinkling laugh woke up his pulse. “Oh, yeah. More than okay.”
“There you two are,” his grandma said at his elbow. “We wanted to let you know we’re going to head to Stuart’s. A movie and a nice, warm Christmas drink are calling our names.”
“I have the original version of Miracle on 34th Street.” Smile lines fanned out from Stuart’s eyes as he turned to Faith. “Can Grant bring you home?”
“Sure can.” Grant turned to his enchanting companion. “Right?”
“Maybe. I don’t get into a vehicle with just anyone,” she teased, leaned over, and looked at his feet. “Let me see your socks.”
Uh-huh. Who knew Faith Hathaway had a sock fetish?
It was a good thing the old Grant hadn’t gone anywhere. He pulled up both pant legs just enough to display his favorite mismatched socks.
It started to snow.
“You just bought yourself a passenger, Mr. Reed,” she smirked, holding out her hand to catch the slowly floating snowflakes.

Bringing all the elements of a story into that moment when all seems lost is always the hardest part for me to write.

Her granddad nodded, worry etching the bracket of lines around his mouth deeper. “I don’t know what happened, but—”
Neither did she, and that was the problem. Did she just think Grant was a nice guy, or did she truly love him?

The Christmas Makeover is a good example of my writing style. I love to write sweet, cozy romances set in small towns. I love getting to know my characters from the first page and then follow them on their journey to finding their happy-ever-afters.

I want them to have fun. I want them to enjoy a Christmas story that has a few twists and turns. I hope they fall in love with Grant and Faith’s story as much as I did.

The Christmas Makeover is the third book in my Angel Point series. Currently, I’m working on another sweet, cozy romance set in a small river town in the Cascade Mountains. This enemy to lovers, city versus country story is a bigger book than I normally write, a challenge that also has my usual elements of three generations and a secondary romance.

Giveaway: An ebook copy of The Christmas Makeover & 3 Tule ebooks of your choice

Excerpt from The Christmas Makeover:

He’s ready for the lights…

Baker Grant Reed loves discovering new Christmas recipes, making people smile, and Angel Point—not necessarily in that order. But when his editor turns down his proposal for a Christmas cookbook, he must show her how serious he is about becoming the premier pastry chef in the country. He turns to his best friend, Faith—if anyone can give him a complete makeover that will turn heads, she can.

She knows how to make things sparkle…

In her past, Faith Hathaway was a costume designer for some of Broadway’s most prestigious plays. Now, after moving to Angel Point to help her grandfather, she owns and operates a vintage boutique and helps out at the local theater. When Grant asks for a makeover, she’s torn—she loves him the way he is, mismatched socks and all.

In exchange, he promises to show Faith, who has never enjoyed the holiday season, the magic of an Angel Point Christmas. But as the two grow closer, Grant can’t help but wonder…has he got his Christmas wish all wrong?

Susan is an award winning author of contemporary romance, women’s fiction, and dystopian romance. Like all children of military families, she spent her childhood moving from one duty station to the next. She likes to say she is first and foremost a wife, mother, sister, daughter, friend, dreamer, and novelist. These days, when not working as a Registered Nurse, she remodels her house and writes whenever she can.
Website | Facebook | Twitter | Instagram | GoodReads |

30 Responses to “Spotlight & Giveaway: The Christmas Makeover by Susan Lute”