Today it is my pleasure to Welcome author Tiana Warner to HJ!

Hi Tiana and welcome to HJ! We’re so excited to chat with you about your new release, The Helheim Princess!

Thank you for having me, and hello to your lovely readers! 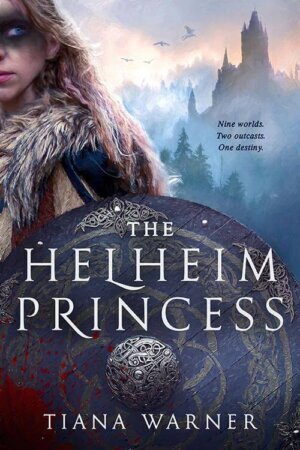 The Helheim Princess is a sapphic enemies-to-lovers romance that takes place in the nine Norse worlds. When a stable hand named Sigrid sees a vision of herself riding the eight-legged horse, Sleipnir, she teams up with an enemy valkyrie to travel through the worlds and uncover her greater destiny.

Sigrid urged Hestur into a gallop, tearing across Vanaheim’s grassy hills while the other girls flew drills atop their winged white mares on the training field. As valkyries, serving the nine worlds and being battle-ready at all times was their job.
As the only girl in Vanaheim who’d been paired with an ordinary horse at birth, this mission belonged to Sigrid. She bent low in the saddle, ready for the flat-out, barely controlled speed that sucked the breath from her lungs. In looks, Hestur was the most ordinary of all horses.

Vulnerability and trust play a huge part in their connection. While the heroines start off hating each other, they bond over how much they need each other and slowly build mutual trust.

Happens in a moment of great emotional turmoil, where Sigrid is forced to make one of the toughest choices of her life.

It’s a toss-up between the climax and a scene in the middle when Sigrid and her horse are fleeing the fiery hellhound, Garmr.

Sigrid grabbed Hestur’s mane and kicked him into a gallop. He hesitated for a fraction of time, then surged forward like the start of a race. He hit full speed in three strides, shooting between Garmr’s front legs.
Flames licked toward them. Heat billowed past Sigrid, pulling sweat through her pores.
They made it to Garmr’s back legs before a deafening bark sounded overhead. The hound turned, one of his back legs skittering toward them. They dodged it, but his tail came to meet them.
Sigrid cried out as the line of fire that formed his tail swooped toward them, covering too much ground to dodge.
“Jump!” she shouted, crouching into position.
Hestur needed no urging. His hooves lifted from the ground, and his powerful haunches took them soaring over Garmr’s tail. The key to jumping was to avoid looking down, but Sigrid couldn’t help it this time as the flames disappeared beneath Hestur’s belly.
They landed bumpily, and Sigrid clamped her legs tighter to avoid bouncing off Hestur’s side.
“Go!”
He regained his footing and surged onward, galloping with all his heart.

There are a lot of great moments to choose from, but I’ll have to go with the moment Sigrid and Mariam meet, when Sigrid is trying to stop Mariam from taking an important relic.

At the window, burgundy curtains flapping on either side of her, Mariam spun and sank into a half crouch. Something about the movement froze Sigrid in place. It was the way the daylight illuminated Mariam from behind, framing her like one of the gold statues in the courtyard. She narrowed her eyes, her fiery expression at odds with the soft curves of her face.
For a moment, captured by Mariam’s gaze, Sigrid forgot why she was here.
Mariam gripped a pale pink, semi-translucent stone with a thin chain swinging from it. Though Sigrid had never seen it before, she knew what it was—the Eye of Hnitbjorg.

If you like stories about badass warrior women, the bond between people and their animals, and an enemies-to-lovers romance that will leave you looking like the heart-eyes emoji.

Other than the sequels to The Helheim Princess, I have two more sapphic romances launching this summer! “From Fan to Forever” is a celebrity romance with Ylva Publishing, and I’m contributing a steamy novella to a sapphic paranormal box set called “Eternally Hers”.

Giveaway: A print copy of The Helheim Princess by Tiana Warner

To enter Giveaway: Please complete the Rafflecopter form and Post a comment to this Q: What is your favorite romance trope?

Excerpt from The Helheim Princess:

Mariam sat on a nearby boulder, changing her bandage. At least, she was trying to. She wrapped a clean one around her arm and used her teeth and one hand to try and fasten the end.
Sigrid walked over. “Let me.”
“It’s fine. You’re not exactly a doctor.”
“No, but I’ve spent my life wrapping horse legs.”
Mariam considered this, then held out her arm.
Sigrid wrapped the bandage more gently than she would have on a horse, her fingers grazing Mariam’s soft skin, Mariam’s breath tickling her cheek. She pretended not to notice how close they were sitting.
A flutter spread through her middle, like the thrill of anticipation before a gallop—a sensation both pleasant and confusing.
As she pulled the material tight, Mariam gave a little gasp.
Sigrid drew back, desperately wishing she would stop hurting Mariam. “Sorry. Are you okay?”
The daylight revealed beads rolling down the girl’s temples beneath her helmet, a pained scrunch between her eyebrows, and every freckle dusting her nose and cheeks.
“I’m fine.” Her breath tingled on Sigrid’s lips. It smelled sweet from the apples they’d eaten.
Heat rising in her face, Sigrid wondered if she should slide back a little. But Mariam didn’t lean away, so she stayed where she was.

For as long as Sigrid could remember, she’s wanted to become a mighty, fearless valkyrie. But without a winged mare, she’s a mere stable hand, left wondering who her parents were and why she’s so different. So when the Eye shows her a vision where she’s leading a valkyrie charge on the legendary eight-legged horse Sleipnir, she grabs the possibility of this greater destiny with both hands, refusing to let go.

Too bad that the only one who can help her get there is Mariam, an enemy valkyrie who begrudgingly agrees to lead her to Helheim but who certainly can’t be trusted―even if she does make Sigrid more than a little flustered. As they cross the nine worlds, battling night elves, riding sea serpents, and hurtling into fire to learn the truth about Sigrid’s birthright, an unexpected but powerful bond forms.

As her feelings for Mariam deepen into something fiery and undeniable, Fate has other plans for Sigrid. What happens when the one thing you think you were meant to do might end the nine worlds?
Book Links: Amazon | B&N | iTunes | Goodreads

Tiana Warner is an LGBTQ+ author from British Columbia, Canada, best known for her critically acclaimed “Mermaids of Eriana Kwai” trilogy and its comic adaptation. Tiana is a lifelong horseback rider, a former programmer with a Computer Science degree, and an outdoor enthusiast who loves to explore nature with her musician boyfriend and their hyperactive rescue mutt, Joey.
Website | Facebook | Twitter | | Instagram |

« REVIEW: The Ones We Keep by Bobbie Jean Huff
Spotlight & Giveaway: Digging Up Love by Chandra Blumberg »

23 Responses to “Spotlight & Giveaway: The Helheim Princess by Tiana Warner”