Today, HJ is pleased to share with you Maisey Yates’s new release: The Lost and Found Girl

New York Times bestselling author Maisey Yates dazzles with this powerful novel of sisterhood, secrets and how far you’d go to protect someone you love… 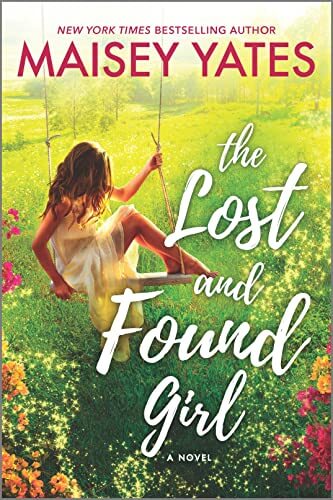 The small Oregon town of Pear Blossom welcomes the return of its prodigal daughter Ruby McKee. Found abandoned as a baby by the McKee family, Ruby is the unofficial town mascot, but when she and her adoptive sisters start investigating the true circumstances around her discovery, it soon becomes clear that this small town is hiding the biggest, and darkest, of secrets. A raw, powerful exploration of the lengths people go to protect their loved ones, for fans of Lori Wilde and Carolyn Brown.

Ruby McKee is a miracle.

It’s a miracle she survived, abandoned as a newborn baby. A miracle that she was found by the McKee sisters. Her discovery allowed the community of Pear Blossom, Oregon, broken by a devastating crime, to heal. Since then, Ruby has lived a charmed life. But she can’t let go of the need to know why she was abandoned, and she’s tired of not having answers.

Dahlia McKee knows it’s not right to resent Ruby for being special. But uncovering the truth about sister Ruby’s origins could allow Dahlia to carve her own place in Pear Blossom history… if she’s brave enough to follow her heart.

Widowed sister Lydia McKee doesn’t have time for Ruby’s what if’s – when Lydia’s right now is so, so hard. Her husband’s best friend Chase might be offering to share some of the load, but can Lydia ever trust her instincts around him?

Marianne Martin is glad that her youngest sister is back in town, but balancing Ruby’s crusade with the way her own life is imploding is turning into a bigger chore than she imagined. Especially when Ruby starts overturning secrets about the past that Marianne has spent a lifetime trying to pretend don’t exist.

And when the truth about Ruby’s miraculous origins, and the crime from long ago, turn out to be connected in ways no one could have expected, will the McKee sisters band together, or fall apart?

Enjoy an exclusive excerpt from The Lost and Found Girl

Excerpt. ©Maisey Yates. Posted by arrangement with the publisher. All rights reserved.

Giveaway: One print copy of THE LOST AND FOUND GIRL by Maisey Yates (US and Canada only)

Maisey Yates is a New York Times bestselling author of over one hundred romance novels. Whether she’s writing strong, hard working cowboys, dissolute princes or multigenerational family stories, she loves getting lost in fictional worlds. An avid knitter with a dangerous yarn addiction and an aversion to housework, Maisey lives with her husband and three kids in rural Oregon. Check out her website, maiseyyates.com or find her on Facebook.

« Spotlight & Giveaway: One Colorado Night by Joanne Rock
REVIEW: The Kiss She Claimed From the Greek by Abby Green »

28 Responses to “Spotlight & Giveaway: The Lost and Found Girl by Maisey Yates”