Today it is my pleasure to Welcome author Christi Barth to HJ!

Hi Christi and welcome to HJ! We’re so excited to chat with you about your new release, The Magic of Christmas! 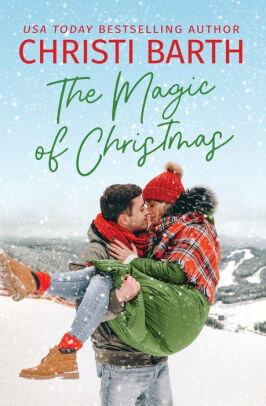 Rowan and Jeremy are competing for the same promotion. They have to come up with an ad campaign to breathe new life into a Christmas themed adventure park. It means staying at the resort–together. They begin the trip as office adversaries. But spending so much time together, away from rivalries and rumors, reveals the truth of who each really is. Or maybe it’s the magic of Christmas working on them? Because the adventure park neither had cared about turns out to be exactly what can help them find what they truly need in life…each other.

Rowan West never made him laugh.
She made him curse.
Made him mad.
Made him work harder to keep up with her creativity and dedication.
And every once in a blue moon, she made him wonder about what it would be like to kiss her. Probably about as receptive as a cactus. Or that hogweed plant his mother grew that caused blisters if you brushed against it.

Last December, I got the flu. The full-scale, need a nap just from the effort of eating soup flu. Which then transitioned into bronchitis. I spent a LOT of time in bed. Since it was December, that translated into me having the Hallmark channel on 24/7. And one night, I watched a movie that catapulted me into an idea. An idea so strong that it made me get up, stumble to my office to grab a notebook, and write down its brilliance: rivals conference room fight for promotion. Somehow, once my fever broke, I figured out how to turn that into a book! I just wish I could remember which movie tickled my brain with it…

Rowan is very Type A; driven, focused, and convinced that blinking away from her goal for even a second could cost her everything. But she couldn’t be just that hard candy coating—I had to figure out how to show her melty heart. Does that perhaps involve a dog, in the tradition of just-cheesy-enough xmas stories? YOU BET! And Jeremy seems like he’s her opposite, all about fun, easygoing. But he’s got to prove himself—even if only to himself, not the world. It was fun seeing how these opposites were the same at their cores.

Where they start to thaw toward each other. Because I’m a hopeless romantic.

“We need to call a truce.”
“I didn’t know we’d declared war.”
“Don’t. Don’t lie to me. You’ve been on guard and on attack since the day we met. I don’t know why. I don’t need to know why.” To smooth over any feathers he’d undoubtedly ruffled, Jeremy joked, “Unless it’s that you have a violent dislike of my cologne. I’d be willing to toss it if that’s the case. To bring peace.”
Rowan leaned forward. Went up on tiptoe until the floofy top of her hair brushed the underside of his chin. All his senses went on alert. Because even after being sniped at by her all day, Jeremy couldn’t not notice that a beautiful woman was pressed up against his chest. That they were closer than they’d ever been before.
And he liked it.
After a quick sniff, she rocked back on her heels. “No, I like it. You smell like the woods, when we’d go out to cut down a Christmas tree.”
Her cheeks pinked up. Her head angled down and to the side, almost like she didn’t want to see his reaction to her words.
Was she embarrassed?
Was she flirting?
No. No way. Not possible.
From anyone else he’d entertain the likelihood, but not from Rowan West. She didn’t flirt with anyone at Lakeshore. Not even jokingly, at happy hour. It was a line that everyone was aware that she never crossed.
And if she did one day, it sure wouldn’t be with him.

This was actually one of my easiest books ever to write—it poured out of me! I guess I just really connect to all the Christmas-ness of it. The most difficult part was chapter one—setting up how much they dislike each other, how hard she wants to fight him for the promotion while still getting the reader to like Rowan.

“Stop it,” she ordered in a pointed whisper. Rowan even waved her fuzzy white pipe cleaner at him for emphasis. Goodness knows she wasn’t using it for anything else, like the vision board. What were pipe cleaners supposed to symbolize for their coming year?
He leaned back in his chair, eyes wide now and innocent. Stretched out long legs wearing the only pair of blue jeans in the entire room. “Stop what?”
Like he didn’t know? Oh, the man infuriated her. Basically every time he opened his mouth. “Not paying attention. Being disrespectful to our boss.”
“You’re the one who started talking to me. Whose fault is that?”
No. Nope. Jeremy had started all this, not her. “Please. I saw your eye roll. It was as obvious as the neon marquee at the Biograph Theater.”
“You saw it.” Jeremy jerked his chin toward the front of the rom. “He didn’t.”
Oh. Well.
He had a point. Which set her teeth even more on edge. “You should be more professional.”
“Sure. I’ll do that.” He smirked at her. “Right after you loosen up.”
They weren’t in a frat together. Did he expect her to loll about in yoga pants and offer him a Jell-o shot every time William said they rocked?
They were colleagues. Vision-boarding aside, this company had high standards. Was sought after by clients and dreamed of by creatives. He might be Mr. Laid-Back, but the job demanded more.
Which was why Rowan gave it 110 percent, day in and day out.
There was no loosening up. There was only and always being at the top of her game.
“This isn’t a competition, Jeremy.”
“Everything’s a competition between us. Haven’t you noticed?”
Oh, she’d noticed.
Somehow, they’d leaned toward each other. Her pithy remonstration had turned into a full-blown conversation. Now Rowan’s hand gripped the arm of his chair. Jeremy’s hand was slapped flat across her vision board.
Probably for the best that her attempt at putting her feelings to paper were no longer visible.

My voice is all about banter and flirting. So this is 98% my usual writing style. The other 2%? Well, this is my 3rd ‘sweet’ Christmas story. The rest of my books are definitely steamier.

I think what makes the Christmas season so special is the emphasis on love, family, and friendship. Connecting to others—by caroling, family dinners, office parties, or doing toy drives for the less fortunate. I’d love for people to remember that the trappings of the season are just a way to focus you on the spirit of the season, and let it bring out all the goodness in your heart. Yup, I’m a hardcore Christmas lover!

I just started the third and final book in my Love Lottery series. And I’ll be diving into my Christmas release for 2021 soon – the first book in 36 that I’ve written to be set in my hometown of Baltimore! Coming soon, I have Book 1 in the Love Lottery series, The Accidental Fiancé, releases on 2/23/20. Book 2, Definitely Not Dating comes out in early summer.

Giveaway: An ebook copy of The Magic of Christmas & 3 Tule ebooks of your choice

To enter Giveaway: Please complete the Rafflecopter form and Post a comment to this Q: There’s something inherently romantic about the holiday season, with the candlelight and snow and spiked cocoa. Have you ever been in a Christmas romance?

Excerpt from The Magic of Christmas:

It’s the opportunity she’s dreamed of…

After spending two years focused on her career, Rowan West is finally up for an advertising manager promotion. Holiday parties and gift-buying are on hold as Rowan travels to New Hampshire to create a marketing campaign that can revive a struggling, Christmas-themed resort and adventure park. Rowan’s brains and ambition make her shine, and she won’t allow anything to get in her way—especially not her far-too-handsome competitor with a sense of humor and high-up connections.

He needs to prove himself…

Jeremy Kincannon is competitive enough to fight tooth and nail for a promotion he doesn’t even want. Because his stepfather owns the company, no one believes he earned his spot despite having climbed up from the bottom like everyone else. He’s intrigued by his button-upped, business-only colleague who’s distractingly pretty. So he lays down a challenge—he’ll call a truce to their verbal sparring if she tries to have fun.

As their rivalry wanes and attraction grows, will Jeremy and Rowan embrace the magic of Christmas?

USA TODAY bestseller Christi Barth earned a Masters degree in vocal performance and embarked upon a career on the stage. A love of romance then drew her to wedding planning. Ultimately she succumbed to her lifelong love of books and now writes award-winning contemporary romance.

Christi can always be found either whipping up gourmet meals (for fun, honest!) or with her nose in a book. She lives in Maryland with the best husband in the world.
Website | Facebook | Twitter | Instagram | GoodReads |

27 Responses to “Spotlight & Giveaway: The Magic of Christmas by Christi Barth”