Hi Michelle and welcome to HJ! We’re so excited to chat with you about your new release, The Magnolia Sisters! 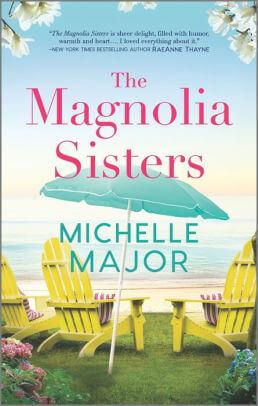 The Magnolia Sisters is a series that focuses on three women who discover they share the same father after he dies and how they manage to forge a bond in the small town of Magnolia, North Carolina. In the first book we meet Avery – a big city transplant who is starting over and definitely not looking for love (spoiler alert – she finds it with a sexy firefighter). I loved (as always) writing an emotionally charged romance but also having the opportunity to explore the relationship between the three sisters.

For different reasons, both Avery and Gray are trying to be tough and to muscle through life without admitting that they need to rely on anyone. I think they recognize the same loneliness and hidden desire for connection in the other one. But admitting they feel that way is more of a challenge…and was lots of fun to write!

In addition to falling for Gray, Avery also develops a sweet (and a little sassy) relationship with his young daughter, Violet. I loved how that relationship developed and the way the precocious girl brought out Avery’s well-hidden soft side. This is a tiny bit from a scene where Violet’s dance school gives Avery a private concert to convince her to help save the town’s finances.

After a few minutes, the music ended. The first group of dancers bowed and then filed out of the room, replaced by the next class. Violet appeared, still sporting Avery’s braids from yesterday. She waved to her father, beamed at Carrie and then shot Avery an angry death glare.
Avery tugged on the ends of her hair and mouthed “nice braids,” earning an eye roll from the girl.
“You know she’s five,” Gray whispered, leaning in. “You’re supposed to be the adult.”
Oh, yeah, Avery’s girlie parts wanted to shout as Gray’s heat and masculine scent washed over her. All grown woman right here.
“Kids shouldn’t be coddled,” she answered instead then bit the inside of cheek, hating that she sounded like her mother.
“Dad used to say the same thing,” Carrie told them both. “That’s a strange coincidence.”
“Stop distracting me. I’m pretending to care.” Avery ignored both Carrie and Gray, even when she felt them share a look behind her back.
She’d never admit it, but she did care. It was infuriating to have her emotions manipulated by a financially strapped dance teacher and her students, but Avery couldn’t help it.

I think during this challenging time in our world, the ability to escape into a book is more important than ever. To disconnect and give our brains and hearts a little respite from the constant stream of news that bombards us from every angle. And I’m grateful to be able offer that to any person through my story.

In addition to The Magnolia Sisters, the second book in the series, The Merriest Magnolia, will release in October. I also have three books in a new series, Welcome To Starlight, with Harlequin Special Edition so it’s an exciting year for me! 2021 will continue both series and hopefully even more books to come.

Giveaway: Since I’m not going out much other than for essentials, this giveaway will be for 5 ebook copies of The Magnolia Sisters. Open internationally as well.

To enter Giveaway: Please complete the Rafflecopter form and Post a comment to this Q: Can you give one tip on how you cope with the current stay-at-home or social distancing reality? I think the more we share as a community, the better we’ll be able to get through this time. My tip is to be gentle with yourself. I’ve seen lots online about cleaning out all the closets and getting caught up on everything – and that’s good. I’m working on some projects to stay busy. But I’m also remembering to take time to just breathe or sit outside or pet the dog – there’s enough stress right now without putting even more on ourselves. XO

Excerpt from The Magnolia Sisters:

An inheritance brought her to Magnolia, but love just might keep her there…

Avery Keller arrives in Magnolia, North Carolina, with one aim: collect her inheritance and quickly put the quirky town in her rearview mirror. But the father who didn’t acknowledge her when he was alive has left Avery a mess to sort through—along with two half sisters she’s never met and a gorgeous single dad living next door. Soon her plan to keep this colorful, close-knit community at a distance gets complicated….

Grayson Atwell has rescued plenty of people in his firefighting career. His work and his little girl, Violet, are his entire world and there’s no time for anything—or anyone—else. But the vulnerability beneath Avery’s prickly facade brings out a fiercely protective side of him. Despite her protests, Gray can see that Avery’s falling under Magnolia’s spell—just like he’s falling for her. Now the only question is: How can he convince her to give them both a chance at forever?
Book Links: Amazon | B&N | iTunes | kobo | Google |

Michelle Major grew up in Ohio but dreamed of living in the mountains. Soon after graduating with a degree in Journalism, she pointed her car west and settled in Colorado. Her life and house are filled with one great husband, two beautiful kids, a few furry pets and several well- behaved reptiles. She’s grateful to have found her passion writing stories with happy endings. Michelle loves to hear from her readers at www.michellemajor.com.
Website | Facebook | Twitter | Instagram | GoodReads |

« Spotlight & Giveaway: A Match Made Perfect by Anna J Stewart
REVIEW: Her One Night Proposal by Katherine Garbera »

34 Responses to “Spotlight & Giveaway: The Magnolia Sisters by Michelle Major”