Today it is my pleasure to Welcome author Paula Altenburg to HJ!

Hi Paula and welcome to HJ! We’re so excited to chat with you about your new release, The Montana Rancher! 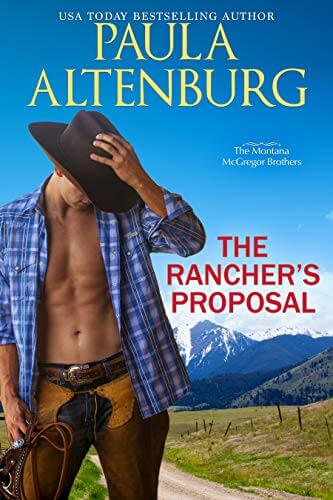 A troubled man searching for a purpose in life finds a purposeful woman who has no place for trouble in hers.

Violence was a large part of Ryan’s past. He had anger issues as a child and had to learn how to manage that. At one point two of the boys in the group home get into a fight and Elizabeth, who has a violent past of her own, doesn’t trust Ryan to deal with it. I love this particular line because I raised boys and you can’t ignore their natural instincts, you redirect them:

Ryan peeled off his shirt and kicked off his shoes. “Handy tells me you’re a good worker. He says you’re tough. You want to prove you’re tough to the world, then this is the best way to do it, because there’s nobody tougher than smoke jumpers. They run this course in full firefighting gear. Fighting just proves you’re an asshole.”

Really, my stories all start with the characters. I had Grand, Montana in place thanks to the McGregor Brothers of Grand, Montana, so for The Endeavour Ranch of Grand, Montana series, the story world already existed. I knew Dan McKillop, the sheriff from the McGregors, was going to get a story, but he wasn’t a high-angst character and I wanted someone edgier for this third book. I let Dan (The Montana Sheriff) and Dallas Tucker (The Montana Doctor), set up and balance out Ryan’s story in The Montana Rancher. Dan, as a sheriff, and Dallas as a doctor, both know how to deal with Ryan’s dark side even if they don’t know where it comes from.

Because my stories start with the characters, I put a lot of thought into how those characters relate to each other. What are their triggers? Ryan has so much baggage… How he deals with it reflects who he is as a person. Then we have Elizabeth. Stories are built around conflict, so I made her someone who knows what she wants. And what she doesn’t want, as a social worker, is to bring her work home with her every night. Well, with Ryan, that’s exactly what will happen. His past is always going to be there, it’s always going to influence him, so she either has to step up and accept it, or walk away.

I always love writing the introductory scenes where we get to know the main characters because I’m really just meeting them for the first time, too. It turns out Elizabeth has a very dry, pragmatic sense of humor:

Ryan O’Connell wasn’t what one would expect of a hands-on, billionaire philanthropist with a soft spot for troubled boys. In her head, she’d pictured someone more nurturing. A natural caretaker. Instead, he was darker. Broodier. A whole lot more Heathcliff from Wuthering Heights and less Mr. Rogers. The slight cleft in his chin gave him a baby-faced appeal, complicating him further. She couldn’t figure out if he was a youthful ninety-year-old or an ancient thirty-something, but she had her suspicions.

She wasn’t about to let Heathcliff find a reason not to give her this job, however, so she pulled up her panties—figuratively, not literally, because who could find them under all of these clothes—and plunged into the storm. Ice bit her cheeks and rendered her blind. Her arms pinwheeled wildly. For a second, she feared she might become airborne and imagined her body landing in Kansas once the storm finally dropped her.

Then Heathcliff—if she survived, she had to stop calling him that—grabbed the back of her coat and helped keep her borrowed boots on the ground. “Better let me go first,” he shouted over the howl of the wind. “Stay close behind me.”

Easier for him to say. The ground in front of the door to the house had been swept almost bare, but two of the drifts between the house and the calving shed came to her waist. Twice, Ryan had to turn back and pull her free. The speed with which spring could flip back to winter left her in awe. Montana was truly amazing. It made a person appreciate how wonderful it was to be alive.

I can’t tell you the most difficult scene to write—it’s a spoiler. But I can tell you that Elizabeth handles it amazingly well. The woman is a saint.
I have a hard time writing love scenes though, so here’s the buildup to Ryan and Elizabeth’s first time:

His fingers trailed down her throat to toy with the line of her collarbone. “Can you look me in the eye and tell me you aren’t wondering what sex between us would be like?”

“Oh, I’m wondering.” Her lips bent upward. “And I’m sure it would be fantastic, especially right now, and believe me, I’d like nothing more than to find out. But what happens after?”

She was riding a high. He shouldn’t encourage her to make a rash decision that was fueled more by adrenaline than physical attraction, regardless of how much she thought she might want him. That sense of having drifted into uncharted territory jolted him again. Normally, what would matter most was how much he wanted her.

“Your timing is perfect,” she corrected him, leaving him completely bewildered. “But this is a one-off event. To satisfy curiosity. Do you think you can wake up in the morning and pretend nothing happened?
”
He had complete confidence in his personal abilities in that regard. “You’ve just described my whole philosophy toward sex. What about you?”

She stepped closer. He inhaled the feminine, flowery scent of her hair. She rose to her tiptoes and kissed him, her hands on his shoulders for balance. Heat again licked her amber eyes. “You’d be amazed by how quickly I can forget you.”

He laughed out loud at that. “Sweetheart, you just keep on tossing out those challenges, why don’t you? Because trust me, this will be an experience you’ll never forget.”

I think this book definitely showcases my style. I like to balance humor with a character’s internal struggles, and I believe I really hit the mark with this one.

I read for enjoyment and maybe to learn a few things. I like to be immersed in the story world and to care about its characters. I hope readers get those same experiences from The Montana Rancher.

I’m going to be writing in Grand, Montana for the next few years. My next book is The Cowboy’s Christmas Baby, which features Miles Decker, who makes a cameo appearance in The Montana Rancher. I LOVE Miles. His story releases in October 2022. (That makes four Grand books from me this year, and seven books set in Grand so far, if anyone’s counting…)

Which means there are now twelve Grand, Montana books in various stages of development, from concept to completion, and between Roxanne and I, there will be more. I can hardly wait to see how big our story world will grow!

Giveaway: An ebook copy of The Montana Rancher + 3 Tule ebooks

To enter Giveaway: Please complete the Rafflecopter form and Post a comment to this Q: Roxanne and I each have our distinct author voices. How do you (the reader) feel about multiple authors writing in a shared story world?

Excerpt from The Montana Rancher:

He’s been keeping secrets. She needs the truth…

Reclusive billionaire and enigmatic ranch owner Ryan O’Connell spares no expense when it comes to the Endeavour Ranch and its charitable organizations. Next up on his philanthropic agenda is a youth group home for troubled teenage boys. When he hires a social worker to work with the counselors and teen clients, he thinks he can take a step back. But her beauty and determination are tough to ignore and even tougher to resist.

Heiress Elizabeth Benson became a social worker after her older sister was murdered, destroying her once-close family. She’s fiercely protective of the boys on the Endeavour Ranch and is determined to learn more about her mysterious boss who is so much more than the quiet cowboy he pretends to be. Too bad their chemistry complicates everything.

Can Ryan trust Elizabeth with his darkest secrets? Or does he risk losing even more than his heart?

« REVIEW: The Dead Romantics by Ashley Poston
Spotlight & Giveaway: Up All Night with a Good Duke by Amy Rose Bennett »

15 Responses to “Spotlight & Giveaway: The Montana Rancher by Paula Altenburg”