Hi Joanne and welcome to HJ! We’re so excited to chat with you about your new release, The Rival!

Hello! So good to be here with you for a visit! 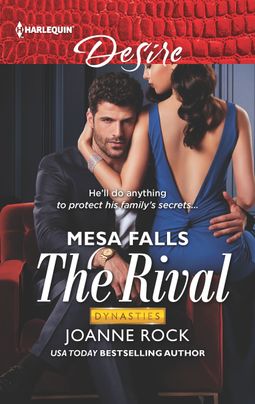 This is the second book in my Dynasties: Mesa Falls series, but it absolutely works as a stand alone! It starts out as a revenge romance with the heroine certain the hero profited from a past misfortune of hers, but as the attraction between these two heats up, they forge a tentative alliance to discover the truth. Enemies to lovers is a fun trope, and it’s set at the holidays, complete with sleigh rides and tree trimming in gorgeous western Montana.

There’s a scene where the hero catches the heroine looking through his things, and as a last resort, she attempts to distract him with their attraction even though she had hoped to ignore that aspect of their relationship. But after a hated kiss, the hero is still suspicious…
“I’m not convinced about your motives.” Devon turned to study her, and she wondered how he could flip the switch from passion to interrogation so fast. “You could be using the attraction as a smoke screen. A very hot, very effective smoke screen, from whatever it is you’re up to.”
Her throat dried up.

The hero is attracted to the heroine’s ease in her own skin, which is ironic given she’s pretending to be someone else. But eventually, she comes to see that through the pretense, she’s finally living life on her own terms– being the woman she really wants to be. As for Regina, she’s attracted to Devon’s focus on her and his interest in her. His attention to her really draws her in spite of herself.

I was touched by the heroine’s journey. She’d been through so much:

She shrugged, not owing him any more explanation than she’d already given. Yet now that she’d started talking about the past—about all the reasons she felt angry—she found it hard to stop. “Even as Georgiana Fuentes, the tabloids hounded me. It was so bad that I got into a car accident trying to elude a photographer. The surprise blessing of reconstructive surgery on my face was that at least I didn’t bear as much resemblance to the woman I was before.”
The surgeries had been painful. Recovery had been slow. But she’d used the time to formulate her plan for revenge. One that she couldn’t abandon just because she was attracted to Alonzo Salazar’s older son.
“Georgiana.” He covered her hand with his where it rested on the blanket.
Even through her gloves she could feel the warmth of his palm. The sound of her name on his lips was oddly soothing. She hadn’t heard it in so long. She’d isolated herself in so many ways, unhappy with the shreds of family she had left after the wreckage caused by that damned book.
“Please.” Her throat burned with emotions as the sleigh hurtled faster toward the ranch. “Don’t call me that.”
She couldn’t afford to let her feelings toward him soften. Part of her wanted to call an end to this conversation, but they were still too far from the ranch for her to get out and walk. She would have to sit tight, see how the conversation—and the attraction—played out.
“Regina, then,” he corrected himself, the gentleness in his voice and his touch unnerving her. “I wish I could take back what he did. Or even help you to understand it, because I don’t understand myself.”
She willed herself to pull away from him but couldn’t quite do it. Her emotions were ragged, and she feared one false move would dissolve all her boundaries and send her hurtling into his arms to seek what warmth she could in his embrace, to forget herself in the seductive power of his kiss.

For the secrets, scandals, sizzle and Christmas! I like a passionate story, and these two characters have a heated connection. But there are family elements here too– her need for one, and his attempts to reconcile the few family relationships he has– that make it a warmhearted holiday story, too.

I’m currently writing the fifth book in Mesa Falls, The Rancher. Next up from me is Mesa Falls: Rule Breaker (February 2020), Mesa Falls: Heartbreaker (March 2020), and Her Texas Renegade (Texas Cattleman’s Club, May 2020).

Giveaway: Joanne will give one random commenter copies of four signed books in her McNeill Magnates series, including For the Sake of His Heir, The Forbidden Brother, Wild Wyoming Nights and One Night Scandal.

To enter Giveaway: Please complete the Rafflecopter form and Post a comment to this Q: The Rival includes a sleigh ride scene, which makes for a pretty holiday card image! What sorts of holiday cards to you love best? Nature scenes? Santas? Family pics? Share with me!

Excerpt from The Rival:

Here’s a sneak peek from the sleigh ride scene-

They both have something to hide, but their chemistry can’t be contained…

68 Responses to “Spotlight & Giveaway: The Rival by Joanne Rock”