Today it is my pleasure to Welcome author Ivy Smoak to HJ!

Hi Ivy and welcome to HJ! We’re so excited to chat with you about your new release, The Society #StalkerProblems! 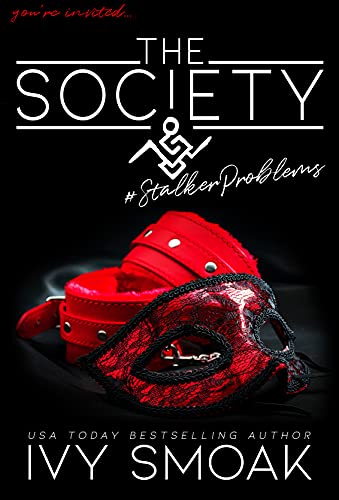 The Society #StalkerProblems is a super steamy story about an awkward girl who gets an invitation to the city’s most exclusive, illicit club.

I stared at the different smoothie flavors. The strawberry banana was calling to me. But I’d promised myself I’d try a new flavor every time I came here.

I have a really funny story about The Society!

It all started with the idea of an invitation to an illicit club. And then the characters started forming in my head. I thought to myself…how funny would it be for a super awkward, accident-prone girl to get an invite to a club like this? She’d overthink everything and do the weirdest stuff. I was so freaking excited about the idea. So I wrote this sexy, hilarious book about Ash (a very clumsy girl who gets herself into all sorts of shenanigans). And I kept writing and writing and writing because the story was too fun and I didn’t want to stop.

But here’s the funny part. My husband read the first chapter of The Society and the following conversation ensued:

Ryan: “This is hilarious. You wrote about yourself.”

Ryan: “Ash is definitely you. She’s more like you than any other character you’ve ever written.”

Me: *Thinking about it for a moment. Knowing I wrote the weirdest character ever.* “No, I don’t think so. Did I send you the wrong file? Ash is a crazy person.”

Me: *Still deciding whether to be offended or not. But then remembering all the crazy stuff Ash does. And how her mind works. Oh my God…I would legit do all the stuff Ash did.* “I’m a crazy person?”

It took me a minute, but I’m not insulted by Ryan’s observation. I LOVE that Ash is my most relatable character yet. And I think he’s right…she’s about to be your new favorite character too! I wrote the weirdest character ever. But there’s a piece of all of us that can relate to everything Ash is about to go through. I hope you’re ready for the craziest journey yet!! Oh and did I mention that it’s also the steamiest?!

The hero of the book – Tanner Rhodes – is my most mysterious hero yet. You’ll be dying to learn his secret. And trust me…it’s going to surprise you.

Everything about the protagonist – Ash – surprised me. She’s a crazy person! How can one person get herself into so many awkward situations? Well…Ash does it. And she does it in brilliant fashion.

There’s an ongoing joke in the book about Single Girl Rules. Ash believes that her best friend, Chastity, made them up. But Chastity denies it, saying they’re real. And since Ash is single…she has to follow them. And these aren’t normal Girl Code rules. They’re much…steamier.

Any of the scenes with the Single Girl Rules would be perfect for the audition. Because it would show if the main characters could capture the hilarity of the book. Whoever is cast as Ash needs to have a great sense of humor.

Here is a snippet about the Single Girl Rules:

“You’re single again, Ash. Which means Single Girl Rules are back in effect! So your no stripper rule is trumped by Single Girl Rule #10: All celebrations of important life events must involve strippers.”

I want readers to embrace their inner-Ash. I’m always using the word “weird” in a good way. I mean…who wants to be normal? Normal is so boring. We’re all weird! I want readers to know that they should be unapologetically, unabashedly themselves.

I am currently working on the next book in my Empire High series. Empire High book 5 comes out next year.

But I do have one more release that comes out this year! Obsessed comes out Nov. 11th. If you like forbidden romances, you’re going to freaking love this one. Professor Hunter has a student that has caught his attention in class. She’s daring him to cross the line. And he’s never been one to resist Temptation…

Giveaway: Digital copy of The Society #StalkerProblems to one reader.

To enter Giveaway: Please complete the Rafflecopter form and Post a comment to this Q: What do you think Tanner’s secret is? And if you were invited to The Society…would you join?

Excerpt from The Society #StalkerProblems:

I got an invitation to an illicit club.
They say they’ll grant me three wishes.
They say they’ll make all my wildest dreams come true.
All I have to do is sign the contract.
Is it too good to be true? I’m about to find out.

Warning: This is Ivy Smoak’s steamiest book yet. Like…super steamy. You’ve been warned. Welcome to the Society…

Ivy Smoak is the Wall Street Journal, USA Today, and Amazon #1 bestselling author of The Hunted Series. Her books have sold over 2 million copies worldwide.

14 Responses to “Spotlight & Giveaway: The Society #StalkerProblems by Ivy Smoak”