Today it is my pleasure to Welcome author Samantha Verant to HJ!

Hi Samantha and welcome to HJ! We’re so excited to chat with you about your new release, THE SPICE MASTER AT BISTRO EXOTIQUE! 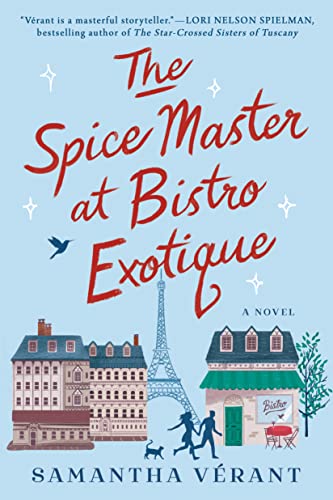 A supremely optimistic American chef on the cusp of opening her flagship restaurant in Paris faces disaster after disaster within the first week of opening her doors. She’s thinking about throwing in the towel on her lifelong dream—until she enlists the help of a wealthy spice master to get her plans on track. Only problem? The deal comes with a huge caveat; she has to work with the woman’s egotistical (and, damn, he’s hot) son. Plus, there’s something off with this woman’s spices. People aren’t supposed to react the way they are to them. Magic? Maybe. One thing is for sure, though: her kitchen is getting increasingly hot.

The Hollywood pitch?
Think: Simply Irresistible (without the weird crab) meets The 100-Foot Journey meets The Mistress of Spices.

This line, which, being an American living in France, I relate to on many levels:

I’ve bastardized so many French words I’ve lost count. Une poule (chicken) and un pull (sweater) sound exactly the same to me. I obviously need chicken, not a sweater, when I’m at the food market, but that doesn’t stop my vendor from laughing.

And I adore the lines from the following scenes:

From Chapter One (A Temporary Distraction), when we’re first introduced to the ‘hero’ of the story…

My phone slides on the pavement. It’s an iPhone—one I bought secondhand but still expensive. I’m blocking his path, crawling on my hands and knees like a squirrel on Red Bull. (I’ve seen this happen. Trust me. Run. Or risk a potential attack.) The screen seems to be okay, but this guy should have one shred, one tiny ounce of politeness. Instead, he turns to walk away.

“Hey, you! You could have broken my phone,” I yell in French.

“You shouldn’t be standing in the middle of the sidewalk during rush hour,” he replies with irritation.

“Oh yeah? And you shouldn’t be—” I say, looking up and taking in his appearance.

My throat catches. Words do not form. He’s sexier than the ceviche I’m planning on making—slick and smooth, cool and hot.

From Chapter Two (The Strangest of Strangers), when Kate meets Garrance, the spice master, and her cat…

“This is my cat, Juju,” the woman says, noting my obvious confusion, maybe even my fear. “He’s my good look charm.”

“Uh, yeah,” I say, backing away ever so slightly. “That’s some collar. I love the rhinestones. Trés chic.”

“Rhinestones? Don’t be silly. I buy all his accessories from a jeweler. His collar is from Catier. As they say, diamonds are a cat’s best friend.”

My upper lip twitches. Nobody has ever said that. And I’m pretty sure she means Cartier.

Kate’s first love is food and ensuring her restaurant is a success, but then she meets the hero– Anti-Keanu/Charles on the street. Nothing wrong with a temporary distraction while building her dream, right? Although he’s devastatingly handsome, the magnetic, physical pull to him, he’s a complete jerk. Still, the fantasies (or shall we say the magic of spices and chemistry) set in. Damn. He’s not only hot, but he can cook.
At first, Charles thinks Kate is a pain-in-the-ass American tourist who is trying to take advantage of his wealthy mom, spice master Garrance. Then he gets to know her—her laugh, her off-brand humor, the natural way in which she presents herself. She’s real. And, if anything, he needs real. Plus, she’s talented in the kitchen…

The following excerpt is from a scene in Chapter Four (All Keyed Up), where we meet Kate’s wildly wacky and eccentric mother, Cri-Cri–a character I loosely based off my own mother, which definitely ensured laughter. (Sidebar: Mom, you’re almost as wacky as Cri-Cri).

“And I told you to stop calling me Kiki,” I say, and she shimmies her shoulders, her lips twisting into a wicked grin.

“Not in France. And you have the better nickname, Christine.”

She twirls. “It’s Cri-Cri now, not Mom or Christine. And I really don’t understand what’s so wrong with Kiki.”

Somebody sedate me. “Mom, you know the problem,” I huff, and she snorts.

At the age of six, my mom gave me the children’s book Kiki Dances and I adored the story, keeping the tattered copy on my bookshelf, where it still rests today. When I was twelve, I’d decided Kiki was short for Katherine, and I insisted everybody call me by that. The name stuck until we moved to Paris, when, at the age of fifteen and on my first day at ASP (American School of Paris), I’d introduced myself to the class.

“Bonjour. I’m originally from Malibu, California. Uh, my name is Katherine Jenkins, but most people call me Kiki,” I’d said, and the entire classroom burst into laughter.

With my cheeks flaming red, I’d tried to recover. “What’s so funny? Kiki is short for Katherine, and one of my favorite children’s books was Kiki Dances.”

The laughter came harder. The teacher placed her hand over her mouth to hide her shocked amusement. I wanted to die. I mumbled, “I really don’t understand why everybody is laughing.”
Mark, one of the boys who didn’t laugh at me, said, “Kiki is slang for ‘dick’ in French.”

My eyes went wide, and after I collected my mouth off the floor, I said, with an embarrassed laugh, “Well, that obviously doesn’t work. Uh, call me Kate.”

Note: When I was young, my mom gave me the book Kiki Dances.

Giveaway: (1) One print copy of THE SPICE MASTER AT BISTRO EXOTIQUE to a winner with a valid US shipping address.

To enter Giveaway: Please complete the Rafflecopter form and Post a comment to this Q: I wrote this book during the height of the pandemic. I cooked A LOT—even hopped on the sourdough bread trend bus, a couple of winks to the bread (I didn’t feed my starter!) are included in this story. My questions: is there a meal that makes you happy? What is it? Have you ever made sourdough? If so, would you make it again?

A talented chef discovers how spices and scents can transport her—and, more importantly, how self-confidence can unlock the greatest magic of all: love—in this perfectly seasoned new novel by Samantha Vérant.

Kate Jenkins doesn’t believe in fate. She believes in a clear vision, meticulous planning, and hard work in order to achieve her culinary dreams. On the cusp of opening her own Parisian restaurant, Bistro Exotique, she isn’t even concerned when her standoffish—and annoyingly sexy—neighbor dismisses her as a crazy American tourist or when she meets the wildly eccentric Garrance, the self-proclaimed Spice Master of Paris, who ominously warns her of the previous owner’s failures.

Confident and optimistic, Kate keeps calm and cooks on. Until a series of unfortunate events derail her plans and her entire staff quits.

Kate is about to throw in the kitchen towel on her lifelong dream when Garrance offers to use her mastery of scents and spices to help her, but it comes at a price: Kate must work with Garrance’s son, Charles, a world-class chef and total jerk. After Kate hesitantly concedes to the deal, she slowly learns to open her heart and mind to new concepts, not quite sure if the magic she’s experiencing comes from Garrance’s spices, from within herself, or from the growing chemistry with Charles. One thing is certain, though: her kitchen is getting increasingly hot.

Samantha Vérant is a travel addict, a self-professed oenophile, and a determined, if occasionally unconventional, at-home French chef. She lives in southwestern France, where she’s married to a sexy French rocket scientist she met in 1989 (but ignored for twenty years), a stepmom to two incredible kids, and the adoptive mother to a ridiculously adorable French cat.

26 Responses to “Spotlight & Giveaway: The Spice Master at Bistro Exotique by Samantha Verant”