Today it is my pleasure to Welcome romance author Melanie Milburne to HJ!

Hi Melanie and welcome to HJ! We’re so excited to chat with you about your new release, The Venetian One-Night Baby! 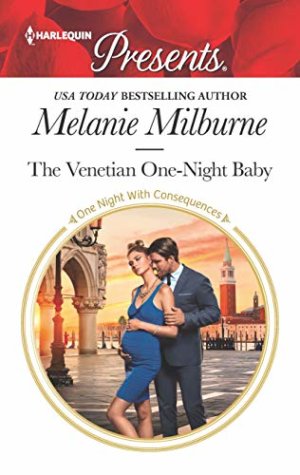 Sabrina was hoping she wouldn’t run into Max Firbank again after The Kiss. He wasn’t an easy man to avoid since he was her parents’ favourite godson and was invited to just about every Midhurst family gathering. Birthdays, Christmas, New Year’s Eve, parties and anniversaries he would spend on the fringes of the room, a twenty-first reincarnation of Jane Austen’s taciturn Mr Darcy. He’d look down his aristocratic nose at everyone else having fun.
Sabrina made sure she had extra fun just to annoy him.

Sabrina and Max have always actively avoided each other due to their parents’ repeated attempts to set them up. But they share a passionate kiss, (off the page in the back story) which awakens something in them they both strenuously fight to resist. But when they next run into each other, that energy is sizzling to boiling point and can’t so easily be ignored.

‘Why shouldn’t we?’ Sabrina leaned closer, drawn to him as if pulled by an invisible force.
He swallowed and slid his hand to the sensitive skin of her nape, his fingers tangling into her hair, sending her scalp into a tingling torrent of pleasure. ‘Because it can’t go anywhere.’
‘Who said I wanted it to go anywhere?’ Sabrina asked. ‘I’m just asking you to kiss me, not marry me. You kiss other women, don’t you?’
His breath came out and sent a tickling waft of air across the surface of her lips. ‘The thing is… I’m not sure I can just kiss you.’
She stared at him in pleasant surprise. So pleasant her ego got out of the foetal position and did a victory dance. ‘What are you saying?’ She couldn’t seem to speak louder than a whispery husk.
His eyes had a dark pulsing intensity that made her inner core contract. ‘I want you. But I—’
‘Can we skip the but?’ Sabrina said. ‘Let’s go back to the I want you bit. Thing is, I want you too. So, what are we going to do about it?’
His gaze drifted to her mouth and then back to her eyes, his eyes hardening as if he had called on some inner strength to keep his self-control in check. ‘We’re going to ignore it, that’s what.’ His tone had the same determined edge as his gaze.
Sabrina moistened her lips, watching as his gaze followed the movement of her tongue. ‘What if I don’t want to ignore it? What if I want you to kiss me? What if I want you to make love to me just this once? No one needs to know about it. It’s just between us. It will get it out of our system once and for all and then we can go back to normal.’
She could hardly believe she had been so upfront. She had never been so brazen, so bold about her needs. But she could no longer ignore the pulsing ache of her body. The need that clawed and clenched. The need that only he triggered. Was that why she hadn’t made love with anyone for all these years? No one made her feel this level of desire. No one even came close to stirring her flesh into a heated rush of longing.
‘Sabrina…please…’ His voice had a scraped-raw quality as if his throat had been scoured with a bristled brush.
‘Please what? Don’t tell it like it is?’ Sabrina placed her hand on his chest where his heart was thud, thud, thudding so similar to her own. ‘You want me. You said so. I felt it when you kissed me three weeks ago. And I know you want me now.’
Max took her by the hands, his fingers almost overlapping around her wrists. At first, she thought he was going to put her from him, but then his fingers tightened and he drew her closer. ‘This is madness…’ His smoky grey-blue gaze became hooded as it focussed on her mouth as if drawn to it by a magnetic force too powerful for his willpower.
‘What is mad about two consenting adults having a one-night stand?’ There she went again—such brazen words spilling out of her mouth, as if she’d swallowed the bad girl’s guide to hook-up sex. Who was this person she had suddenly become since entering his hotel room? It wasn’t anyone Sabrina recognised. But she wasn’t going to stop now. She couldn’t. If she didn’t have sex with Max, someone she knew and trusted to take care of her, who else would she get to do the deed? No one, that’s who.
Ten years had already passed and her confidence around men had gone backwards, not forwards. It was do or die—of sexual frustration. She wanted Max to cure her of her of her hang-ups…not that she was going to tell him about her lack of a love life. No flipping way. He’d get all knight-in-shining-armour about it and refuse to make love to her.
Max brushed the pad of his thumb over her bottom lip, pressing and then releasing until her senses were singing like the Philharmonic choir. ‘A one-night stand? Is that really what you want?’
Sabrina fisted her hands into the thickness of his dark brown hair, the colour so similar to her own. She fixed her gaze on his troubled one. ‘Make love to me, Max. Please?’ Gah. Was she begging now? Was that how desperate she had become?
Yep. That desperate.
Max tipped up her chin, his eyes locking on hers. ‘One night? No repeats? No happy ever after, right?’
Sabrina licked her lips—a mixture of nerves and feverish excitement. ‘I want no one and I mean no one to find out about this. It will be our little secret. Agreed?’
One of his dark brows lifted above his sceptical gaze. But then his gaze flicked back to her mouth and he gave a shuddery sigh, as if the final restraint on his self-control had popped its bolts. ‘Madness,’ he said, so low she almost couldn’t hear it. ‘This is madness.’ And then his mouth came down and set fire to hers.

My favourite scene (apart from the happy ending!) is where Sabrina tells Max she is pregnant. It is at his mother’s birthday party and Sabrina is in the library with Max, struggling to get the words out. Max thinks she is talking about ‘someone else’ in her life, which stirs up intense jealousy in him.

Because of the intense family pressure Max and Sabrina have always felt to be a couple, I would include the scene where Gillian Firbank, Max’s mother comes across them in the library just after Sabrina has told Max her news.

Scene:
The door suddenly opened behind them and Max glanced over his shoulder to see his mother standing there. ‘Oh, there you two are.’ Her warm brown eyes sparkled with fairy godmother delight.
Sabrina sprang away from Max but she bumped into the mahogany desk behind her and yelped. ‘Ouch!’
Max reached for Sabrina, steadying her by bringing her close to his side. ‘Are you okay?’
She rubbed her left hip, her cheeks a vivid shade of pink. ‘Yes…’
‘Did I startle you?’ Max’s mother asked. ‘Sorry, darling, but I was wondering where you’d gone. You seemed a little upset earlier.’
‘I’m not upset,’ Sabrina said, biting her lip.
His mother raised her eyebrows and then glanced at Max. ‘I hope you two aren’t fighting again? No wonder the poor girl gets upset with you glaring at her all the time. I don’t want my party spoilt by your boorish behaviour. Why can’t you just kiss and make up for a change?’
Max could have laughed at the irony of the situation if his sense of humour hadn’t already been on life support. He’d done way more than kiss Sabrina and now there were consequences he would be dealing with for the rest of his life. But there was no way he could tell his mother what had gone on between them. No way he could say anything until she was through the first trimester of her pregnancy. It would get everybody’s hopes up and the pressure would be unbearable—even more unbearable than it already was.
‘It’s fine, Aunty Gillian. Max is being perfectly civil to me,’ Sabrina said, carefully avoiding his gaze.
Max’s mother shifted her lips from side to side. ‘Mmm, I’m not sure it’s safe to leave you two alone for more than five minutes. Who knows what might happen?’
Who knew, indeed?

If they enjoy enemies to lovers stories with a twist of family background harmony!

I am about to resume my 81st book after a hiatus due to breaking my elbow in a fall. I’m 20,00 words in so hopefully it won’t take me too long to get going again. Typing has been difficult and I have to take things slowly to get full movement back. I know I could have used dictation software, but I find the process of physically typing helps unlock my creativity. Plus, the time off has meant I’ve caught up on lots of reading and movie watching, which can only be a good thing for a writer, right?
Out in May, I have Penniless Virgin to Sicilian’s Bride. My hero Gabriel Salvetti is the only white sheep from a notorious criminal family. He needs Anglo-Italian aristocrat Francesca Mancini’s respectability by engaging in a marriage of convenience with her to distance himself from his father’s criminal activities.

Giveaway: A signed copy of ‘The Venetian One-Night Baby’ plus a bonus copy of ‘Claimed for the Billionaire’s Convenience’.

To enter Giveaway: Please complete the Rafflecopter form and Post a comment to this Q: Max and Sabrina have felt the pressure of matchmaking friends and family all of their lives. Is there a couple you have successfully match made? Or were you on the receiving end of such an attempt?

Excerpt from The Venetian One-Night Baby (One Night With Consequences):

It was a sizzling encounter…

Then a baby binds them forever!

Spend one unforgettable night in Venice with this passionate romance!
Book Links: Amazon | 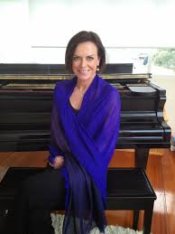 Melanie Milburne read her first Harlequin at age seventeen in between studying for her final exams. After completing a Masters Degree in Education she decided to write a novel and thus her career as a romance author was born. Melanie is an ambassador for the Australian Childhood Foundation and is a keen dog lover and trainer and enjoys long walks in the Tasmanian bush. In 2015 Melanie won the HOLT Medallion, a prestigous award honouring outstanding literary talent.
Website | Facebook | Twitter | | Instagram |