Today it is my pleasure to Welcome author Donna Kauffman to HJ!

Hi Donna and welcome to HJ! We’re so excited to chat with you about your new release, Lavender Blue!

Hello! Thanks so much for having me as a guest today. 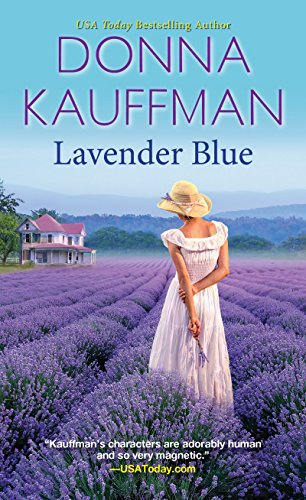 This is a story about a man and a woman whose lives have both been shaped by a past tragedy. Each has moved on in their own way, living lives that are fulfilling, but not yet ready to take that leap of faith to put their hearts back on the line. Until they meet each other. Lavender Blue is set in my home in the Blue Ridge Mountains and I loved giving Hannah and Will their pathway to a much-deserved happily ever after.

I don’t know that I have a favorite, but this line is essentially the central thread and core value for the four women who own and run Lavender Blue farmhouse and tea room and sets the tone for all of their stories: “They were not going to be wallowers. They were going to be warriors… Life warriors.

As I mentioned above, I live in the Blue Ridge, so research for this book is literally right in my back yard. One of my favorite research adventures was going to our local lavender farm and learning all things lavender, getting to pick my own, learn about the processes used for making essential oils, soaps, sachet’s and the like. I even made my own lavender wreath! The other favorite venture which has been ongoing research for the whole series, has been learning more about llamas and alpacas. My sister and I attended a fiber festival near her home in North Carolina and I got the chance to talk to several more llama owners and loved all of their stories. I’m not saying Dexter (the llama in this series) resembles any of those stories…but he might!

Initially, she’s intrigued by his quiet manner (and admittedly doesn’t mind the way his white tee plasters itself to his torso while he rebuilds her chimneys under a hot sun) and Will is intrigued by Hannah’s humor and sunny look on life. But when they discover that they are not alone in having suffered an immeasurable loss in their past, it links them together in a much deeper way. Will has handled his loss very differently than Hannah has, making her a bit trepidatious about getting involved with him. That she’s such a life warrior is a bit intimidating to Will as well. And yet…they can’t quite get themselves out of each others way…

There is a scene that takes place in a barn where Hannah has a bit of a set back in her sunny, moving-forward-with-life attitude. It’s emotional and hard and Will is there for her in every way. It brings them to that almost-kiss moment for the first time, and changes things between them going forward. Here’s just a tiny bit… (I don’t want to give too much away and spoil that moment.)

…because healing comes in all forms, and love blooms where you least expect it. For all that Lavender Blue is an emotional read, it’s also joyful and funny, tender and sweet, with a little steam in there as well. One reader said it has “all the feels, but in the very best of ways.” I hope she’s right! It’s definitely a feel good story with a very happy ending!

Hannah runs Lavender Blue with three other women. One of them, Avery Kent, gets her story this fall in my annual holiday novella, this one titled Lavender & Mistletoe. I’m currently writing the single title that will come out after that. It’s Chey’s story, Under a Blue Hollow Moon.

Giveaway: One winner will receive a signed copy of Lavender Blue and a lovely, handmade bookmark charm designed exclusively for the book by The Cotton Thistle. The contest is open to readers everywhere, around the globe.

To enter Giveaway: Please complete the Rafflecopter form and Post a comment to this Q: I love living a very rural life out here in the mountains, but I was born in Washington DC and grew up as a “beltway baby” in the DC -Metro area. I love my home city, it makes my heart swell every time I go back…but I wouldn’t trade my rural life now for city life again. Which draws you in? If you could pick, which would you choose? City life? Mountains or coast? Country/Rural living? Somewhere between the three?

Given the last excerpt was a bit emotional, here’s one that will make you smile, as Will works himself up to asking Hannah out for the first time…

In the beautiful Blue Ridge Mountains lies a small town with a big heart—and a chance to begin again . . .
When Hannah Montgomery buys a lavender farm in Blue Hollow Falls with three friends, she’s creating a life she never imagined—one she hopes will honor the memory of the sweet young son she tragically lost years ago. Standing on the porch of the sprawling farmhouse, looking out on row upon row of those lush purple plumes, Hannah is ready to embrace this fresh, new start . . .

Then she meets Wilson McCall. The stonemason hired to fix their crumbling chimneys and leaky roof is quieter than most folks in the Falls. Hannah’s not surprised to learn the widower struggles with his own grief. Who could blame her if she finds joy in making Will laugh again, or if she feels a poignant kinship when she sees him with his teenaged son? But her deepening friendship with Will reminds Hannah that there’s a part of her that still needs to heal—awakening a tender yearning to have a life that isn’t just good enough, but lived fully—even if that means taking risks once more . . .
Book Links: Book Links: Amazon | B&N | iTunes | kobo | Google | 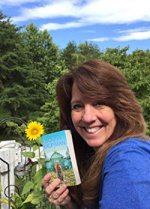 Donna Kauffman is the USA Today and Wall Street Journal bestselling author of over 70 novels, translated and sold in more than 26 countries around the world. The recipient of multiple RT Book Awards, she is also a National Readers Choice Award and PRISM Award winner and a RITA finalist. Born into the maelstrom of Washington, D.C., politics, she now lives in the Blue Ridge Mountains of Virginia, where she is surrounded by a completely different kind of wildlife. A contributing blogger for USAToday.com, she is also a DIYer, a baker, a gardener and a volunteer transporter for the Wildlife Center of Virginia and Rockfish Sanctuary. Please visit her online at www.DonnaKauffman.com.
Website | Facebook | Twitter | Instagram | GoodReads |