Today it is my pleasure to Welcome author Annie O’Neil to HJ!

Hi Annie and welcome to HJ! We’re so excited to chat with you about your new release, The Vet’s Secret Son!

Why thank you very much! It’s a delight to be here. 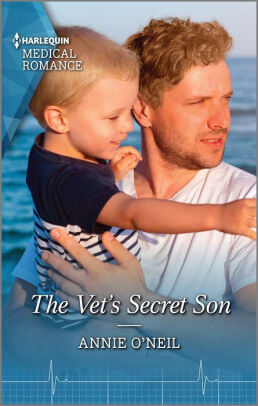 The Vet’s Secret Son dives into one of my favourite tropes: a second chance romance. Who doesn’t wonder what would happen if the stars realigned just a little bit differently and allowed you to find out what would happen if you met the one who got away one more time. Especially if he is the father of the child he never knew you had.

“It’s good to see you, Ellie,’ Lucas said, meaning it. ‘How are you?’
She crossed her arms over the dark blue scrubs dotted with…were those toy poodles?…and glowered at him. Funny how toy poodles took the edge off a glare.
‘Hmm. Good question.’ She tapped her chin with her index finger. ‘Do you mean…how are you, Ellie, after six years of not ever speaking to you? Or, how are you, Ellie, seeing me swan into your clinic as if I owned the place. Or…wait a minute.’ She put her finger up in the air as if a light bulb had just gone off, her green eyes blazing with emotion. ‘Best yet…how are you, Ellie, after I dumped you and made it very clear there was no place in my life for you despite the fact you were the one to always say there is no I in team?”

Excerpt From: Annie O’Neil. “The Vet’s Secret Son (Not for Resale)”. Apple Books.

This book is a duet with my great friend and super author Annie Claydon. We both wanted to write about vets because it’s another area of medical expertise and romance that appealed to us. I live on a farm so am pretty good friends with our vets – so much so I sat them down and plumbed them for great surgeries that they did when they were falling in love in veterinary college. (Hint: watch out for the dog down at the seafront!).

The hero and heroine had one of those love at first sight meetings in veterinary college. They were young, ambitious and saw bits of themselves in the other – instantly becoming inseparable.

I really enjoyed writing the scenes with their son Maverick who was trying to figure out how the new daddy in his life was going to fit into how he understood the mysterious world of mummies and daddies to work:

“Lucas will staying at the Hungry Pelican tonight.’
‘But I’ll be moving in next door tomorrow,’ Lucas said reassuringly to Mav, and then, conciliatory to Ellie, ‘To make things easier for Mummy when she’s on night calls.’
Mummy.
Oh, jeepers. Who knew hearing that out of Lucas’s mouth would give her butterflies? To ignore them she countered with a cheery, ‘Unless, of course, Mummy decides to send Daddy on the night call.’
Ellie and Lucas shared a little tug-of-war smile. It reminded her of when they’d gone out on an internship at a huge clinic up north together when, in the dead of winter, they’d used to play rock, paper scissors to decide who went out to do a midnight calving or a pre-dawn set of lamb triplets where the farmer would, inevitably, surprise the vet with a series of ‘While I have you here…’ cases in their huge, unheated barns. The butterflies took flight again.
‘So…’ Maverick gave his curly mop a scratch. ‘Will I stay in my bed?’
‘Absolutely.’ Ellie sent a pointed look in Lucas’s direction but refused to meet his eyes. “Her body obviously would, but her brain was shouting out the reminder that daddies didn’t get to just pop up after six years of absence and pretend they hadn’t kicked Mummy to the kerb right after they’d proposed to her. She blew out a little breath before she answered. ‘Daddies and mummies who haven’t seen each other in a while sometimes have different ways of living.’
‘You mean like Rockford and Esmerelda?’
‘Who’re they?’ Lucas asked.
‘The stud dog and Mum’s golden retriever.”

If you love puppies, a chance for a single mum who still loves the dad to find her HEA and if you LOVE the idea of living in a beautiful seaside village in Cornwall with delicious fish and chips. Also – there’s Annie Claydon’s book – Healing the Vet’s Heart – that follows right after so if you don’t get enough of Dolphin Cove in my book…there are more sexy vets to follow!

I just turned in a book that will be a duet with the wonderful Scarlett Wilson. I don’t know the name yet, but my working title for it is Double Trouble in the Roman Baby Bubble. That was great fun to write. Suffice it to say, my characters go out to eat ALOT. I also have a Christmas book that isn’t a Harlequin Romance coming out (although there’s still romance in it) called A Miracle on Christmas Street. It’s out in eBook in September and out in book book in November. I am seriously excited about that one as I adore Christmas books.

Giveaway: I have three books (The Vet’s Secret Son) to give away to you gorgeous readers.

To enter Giveaway: Please complete the Rafflecopter form and Post a comment to this Q: What has been your craziest trip to the vets? And if you don’t have a pet…one you’ve heard about? (I heard about a woman whose dog got his paw glued to a mousetrap and then she got her hand glued to it trying to get it off!)

Excerpt from The Vet’s Secret Son:

When Lucas Williams was forced to walk away from Ellie Stone, he knew he was giving up on their dreams of opening a veterinary practice together. Now he’s back and hoping to make amends. But he’s not surprised by how successful Ellie’s become, or that their powerful connection has endured. The surprise is that when he left six years ago, Ellie was pregnant – with his son!
Book Links: Amazon | B&N | iTunes | kobo | Google |

« Spotlight & Giveaway: Serenity’s Song by Cathryn Hein
REVIEW: The Most Powerful of Kings by Jackie Ashenden »